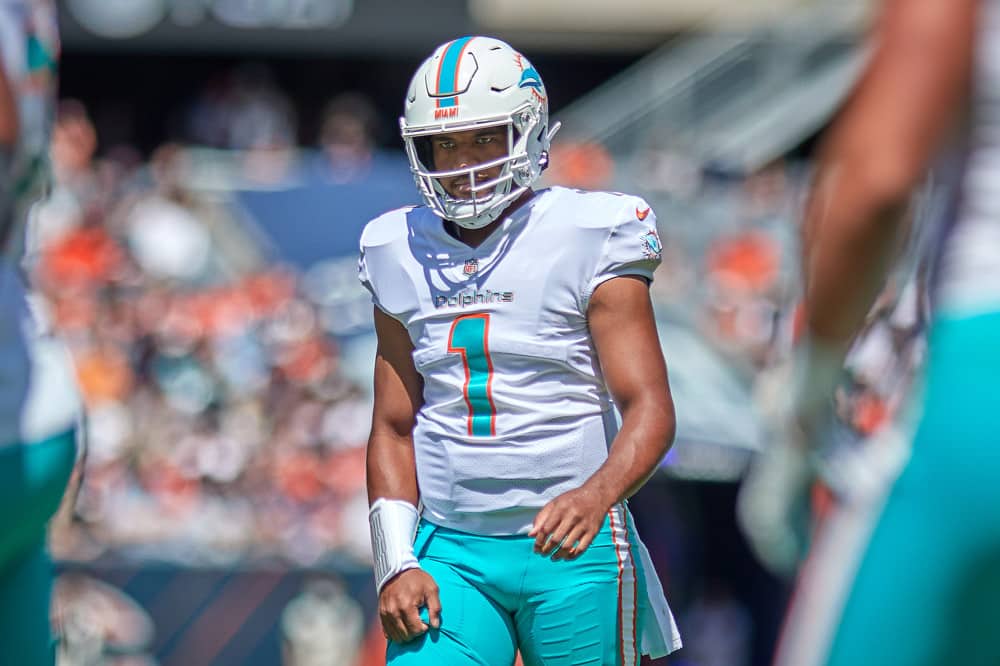 The intrigue for the 2020 season started for the Dolphins when they drafted Tua Tagovailoa in the 2020 NFL Draft. Tua was coming off a major hip injury when he was the starting quarterback for the Alabama Crimson Tide. The odds were against Tua to start the season as the quarterback. Due to COVID-19 Tua did not get a full offseason program and little time to learn the Dolphins playbook. Therefore, the Dolphins had to rely on veteran journeyman Ryan Fitzpatrick aka Fitzmagic.

As I mentioned above Tua will take over as the starting quarterback duties for the Miami Dolphins. The Dolphins also drafted Alabama wide receiver Jaylen Waddle in the 2021 NFL Draft. However, the Dolphins lost a few key pieces on the defensive side of the ball. Shaq Lawson, Bobby McCain, Kamu Grugier-Hill, and Kyle Van Noy all were either traded or signed with a new team.

The Dolphins face the 10th easiest schedule according to their opponent regular season win totals. However, in the first two weeks of the season the Dolphins have two division games, Week 1 on the road against the New England Patriots and Week 2 at home against the Buffalo Bills. Furthermore, the AFC East division has matchups against the lowly AFC South and the NFC South.

I certainly do not see the Dolphins competing for Super Bowl this year, let’s get that out of the way. The division is intriguing, if all things go well for the Dolphins. However, I still need to see Tua do it for a full season before I can get behind him and this team. Furthermore, the Dolphins have the 28th rank offensive line coming into this season. I am not sure why the Dolphins did not invest more in building an offensive line to give protection to Tua. Despite winning 10 games last year, the offensive line and running back position is rankest amongst the bottom. As a result, that puts tons of pressure on Tua to carry this team.

Will Fuller has dealt with injuries all throughout his young career. In fact, over the last three seasons, Fuller has only played in 29 out of 48 potential regular season games. Furthermore, Fuller will miss the first game on the regular season due a suspension dating back to last season because of PED use. In addition, this wide receiver and tight end group has tons of depth. I believe there are too many mouths too feed. DaVante Parker, Jaylen Waddle, Mike Gesicki, and Adam Shaheen are all guys who can perform for this team. Asking Fuller to get close to 900 receiving yards may be a tall order. Especially since he has only exceeded this number once in his career which was last season with the Houston Texans and Deshaun Watson as the quarterback and arguably Fuller as the #1 receiver.

Myles Gaskin was a bit of revelation for the Dolphins last season. Last season in 10 games, Gaskin rushed for 584 yards averaging 4.11 yards per carry. Dolphins did bring in Malcolm Brown to the back field but I believe Gaskin can be a running back who can get close to 1,000 rushing yards. As I mentioned above, Dolphins face a well below average rush defenses. Gaskin certainly has the potential and showed flashes last season.

The Dolphins drafted Jaylen Waddle in this years NFL Draft. There are reports that Tua and Waddle have picked up their chemistry they had when the two played together in Alabama. I believe this is important for Tua to chemistry with a receiver he is familiar with. Waddle may be a stand out in the Dolphins receiving group and a stand out WR2 or WR3 for fantasy teams.