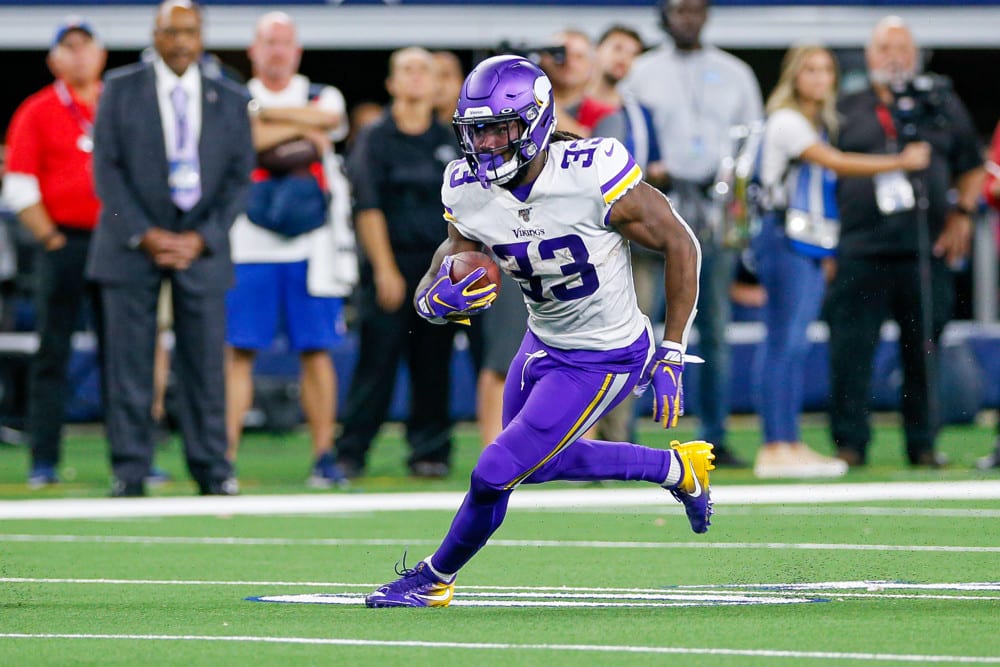 The 2020 season for the Minnesota Vikings was subpar, to say the least. First, coming into the season the Vikings lost offensive coordinator Kevin Stefanski to a head coaching job in Cleveland. Next, they traded their All-Pro wide receiver Stefon Diggs to the Buffalo Bills. On top of all that, the Vikings suffered significant injuries on the defensive side of the football.

However, the bright spot for the Minnesota Vikings was their two offensive talents, Dalvin Cook and Justin Jefferson. Jefferson, drafted in the first round by the Vikings, filled in nicely for Diggs, to say the least. In addition, Dalvin Cook had a spectacular season for the Vikings, rushing for 1557 yards and scoring 16 touchdowns.

Earlier this month we saw reports of Mike Zimmer’s frustration over the lack of vaccinations amongst the team. Several players tested positive for COVID-19, while quarterback Kirk Cousins hit the COVID-19 reserve list for a short time. The question remains – will there be a rift amongst the team over the vaccination? We saw one of the coaches leave the team because of the vaccination requirement by the NFL but later back on in a different role. However, the potential is certainly there for the Vikings.

The Vikings are hovering around having an average to slightly above average strength of schedule. The opponent pass defense and rush defense are average for the entirety of the season. The Vikings face the NFC West and the AFC North divisions this year. Those two divisions certainly possess a huge challenge for the Vikings. Outside of that, the Vikings face the Dallas Cowboys, the Los Angeles Chargers, and the Carolina Panthers, all of which one can argue improved from year to year.

This is a very intriguing season for the Vikings. As I mentioned above they get several players back from last season and the team chemistry may be an issue. However, I believe the division is up for grabs. It will be difficult to see Aaron Rodgers repeat the performance he had last season. What exactly is the motivation for Rodgers and co? The biggest factor is the fans returning to the spaceship in U.S Bank Stadium. When there are fans in attendance, Minnesota has one of the biggest home field advantages in the entire league.

Mike Zimmer, since becoming the head coach of the Minnesota Vikings, is one of the most profitable head coaches. Since Zimmer was hired in 2014, his Against The Spread record is 68-48-1 (58.6%).  I believe the Vikings have a great chance to make the playoffs in the NFC led by Dalvin Cook, Justin Jefferson, and their gritty defense.

As I mentioned above there is a new offensive coordinator for the Minnesota Vikings. We are not exactly sure yet which type of offense he is going to run. Will it be the same as his dad, who was a coordinator who built the passing game off of running the ball? Whatever the case may be, I believe the offense will be more run-heavy with Dalvin Cook. There are plenty of games where the Vikings face well below-average pass defenses. Furthermore, Kirk Cousins thus far has refused to get the vaccine – is it a possibility that he misses games because of it? Certainly.

In his rookie season, Justin Jefferson was everything the Vikings could ask for. As a matter of fact, Jefferson had 88 receptions on 125 targets, with 1400 receiving yards and seven touchdowns. Jefferson filled in nicely with the departure of Stefon Diggs. I believe Jefferson will be the #1 receiver in this offense and should see an increase in targets. In his second year in the league, Jefferson can become a 100+ receptions receiver.

SGPN Fantasy Football expert Nick Dant put it nicely for Justin Jefferson – the potential is to the moon and grab him early. And why not? Jefferson burst onto the scene and put up godly-like numbers. I expect him to continue the dominance he had in his rookie season.