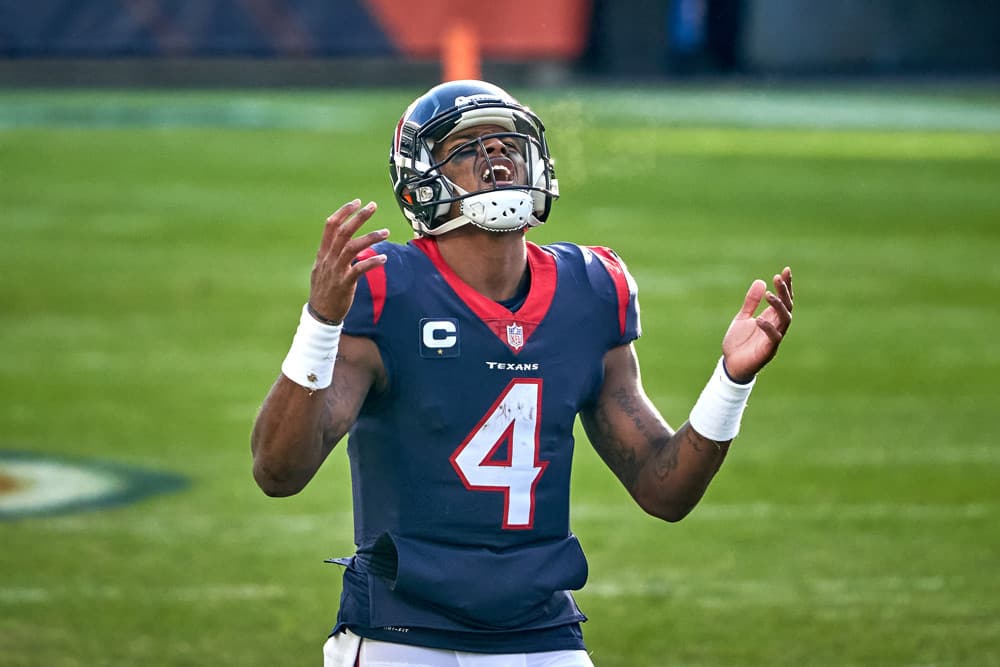 Without a doubt, the Houston Texans 2021 team is the talk of the offseason thus far. More so headlined by the civil suits against Deshaun Watson and his request for a trade. We won’t know what the facts are in the saga from the Texans offseason, however, one fact that we do know is Watson was not happy with the front office for the lack of communication on personnel moves.

Nonetheless, the Texans finished last season with a 4-12 record to only have their first round pick sent to the Miami Dolphins as part of the Laremy Tunsil deal which was re-routed to the San Francisco 49ers. Watson finished the 2020 season leading the league in passing yards but that did not translate to many wins. As a result, it would lead to more questions about the future of the franchise rather than answers.

There was significant roster turnover for the Houston Texans. First, they released their fan-favorite franchise player and possibly the best player in franchise history J.J Watt. The Texans also hired a new head coach, David Culley,  from the Baltimore Ravens and a new General Manager, Nick Caserio. In addition, the Texans hired Lovie Smith as the new defensive coordinator.

The biggest question that remains for the Texans is who will be the Week 1 starting quarterback? The Texans signed Tyrod Taylor as an insurance policy for Deshaun Watson. Additionally, they drafted Davis Mills from Stanford to add depth at the quarterback position. Next, they signed veteran running backs Mark Ingram, Phillip Lindsay, and Rex Burkhead. This certainly will not move the needle for the Texans but these are the new faces on the offensive side of the football.

As I mentioned above, the Texans released J.J Watt. There are new faces on the defensive side of the football also. Led by Shaq Lawson, Kamu Grugier-Hill, and Maliek Collins. The only vote of confidence the Texans have is the hiring of Lovie Smith as the defensive coordinator. Nonetheless, the Texans as a whole rank bottom in the league across most positions. Plus, the Texans have constructed one of the oldest rosters in the league. Also side note the Texans are one of the NFL teams that really seem to be embracing gambling, even partnering up with Caesars according to a recent post at Vegas-Odds.com.

The Texans schedule is rated as an average schedule. Not too hard but definitely not easy. Their opponent win percentage is .504. However, if you look at their opponent’s regular season win totals, the Texans have the fifth easiest home schedule in the AFC and the fourth hardest road schedule. In addition, the Texans will take on the NFC West and AFC East division this year. By no means are these cakewalks, as they take on one of the toughest divisions – the NFC West. Along with the Texans’ “daddy” Bill Belichick.

We have to take these prices with a grain of salt. The Texans have repeatedly said they are in no hurry to trade Deshaun Watson and nor should they. He is under the Texans’ control for multiple years. As of today, we did see a report that the Texans will try to get him on the field come Week 1. Now, is that all smoke and mirrors? Probably. But the Texans have been non-communitive with teams about a deal and are not taking any low ball offers. However, without Watson, the Texans will have Tyrod Taylor as the starting quarterback and a bunch of guys who feel they have something to prove.

As much as I want to say this team will finish with three wins, the division is not as competitive as it seems. The Indianapolis Colts have their own issues with injuries at the quarterback position and O-Line. The Jaguars are trotting out a rookie head coach and a rookie quarterback. The Texans also have games against the Jets and Panthers. Now can they come out and shock the world and make the playoffs? More unlikely than not.

Brandin Cooks is entering his seventh season in his NFL career and second with the Houston Texans. Speed and health is the story for Brandin Cooks. As a matter of fact, in his seven-year career, Cooks has played at least 12 games in six of the years. As a result, Cooks has over 1000 yards receiving in five of those six years.

My initial thoughts when it comes to fantasy football outlook was to avoid drafting any of these running backs for the Texans. SGPN’s own Scott Simpson backs that up for me in his Most Overrated Fantasy Football Players on Each NFL Team article for the 2021 NFL Season. David Culley comes from the Baltimore Ravens coaching staff where they make it a priority to run. But when you have Mark Ingram and Phillip Lindsay with David Johnson the question becomes is there enough meat on the bone for all three backs?

As I mentioned above the Texans traded for Anthony Miller to add to their thin wide receiver group. I am not sure that Miller will automatically become the #1 receiver in Houston but there is upside to him. Perhaps a change of scenery may benefit Miller and regardless of which quarterback is throwing him the ball, he may be a player to have on your bench for some depth.

NFL Preseason Week One ATS Picks & DFS Lineups (Ep. 1068)
Backing the MVP: Taking a Closer Look at the Favorites for the 2021 Award