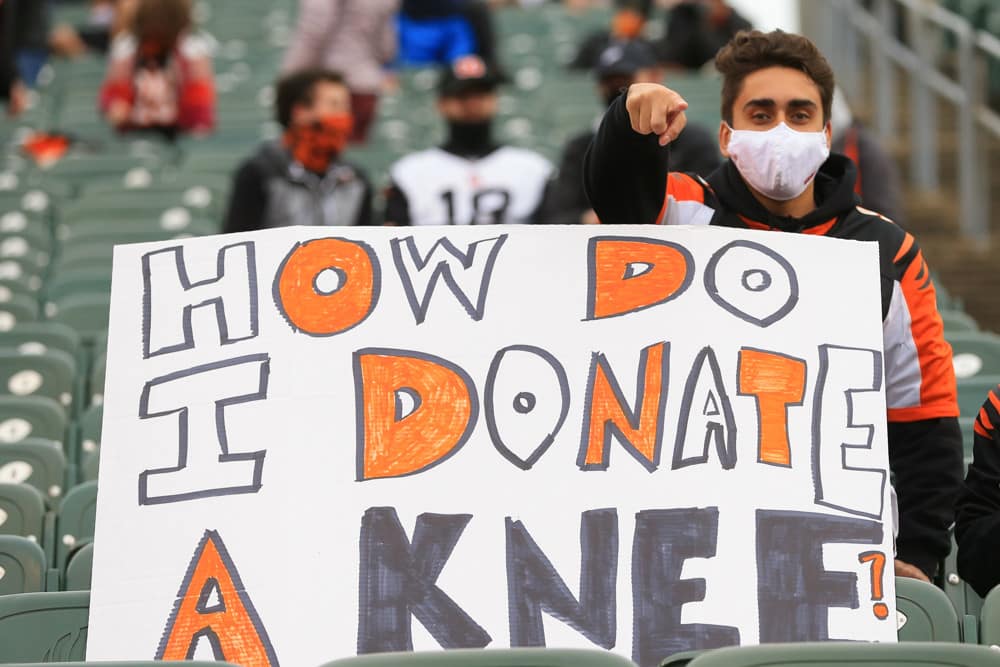 The big storyline of the 2020 season for Cincinnati was the debut of rookie quarterback Joe Burrow. However, injuries to Burrow and nine other regular contributors absolutely ravaged any chance of a good season. The team was 2-7-1 at the time of Burrow’s injury and finished out the season dead last in the AFC North with a 4-11-1 record. That’s not to say that things were golden before the injuries though.

Their offensive line wasn’t the best and they had a ton of new faces on defense. Burrow looked pretty sharp before his injury which gives promise to the future. He held a 13-5 TD-INT ratio and threw for 2,688 with three rushing TDs as well. Cincinnati closed the season on a good note though which showed progression in their defense. They held four of their final seven opponents to 20 points or less.

There is good news for Cincinnati this year. They will have Burrow back from injury as well as others. One great offseason move for the team was re-signing OL Quinton Spain. The Bengals elected to take Burrow’s favorite target at LSU in Ja’Marr Chase with their first-round pick and this could prove to be a vital move.

Veteran WR A.J. Green is no longer with the team, and Chase is almost an upgrade at this point in Green’s career. RB Giovani Bernard is gone as well, and although the team re-signed Samaje Perine it’s safe to say the backfield will belong to Joe Mixon. The only free-agency loss that might hurt was DL Geno Atkins.

Given that Cincinnati can avoid the injury bug, they will have an offense that can hang with anyone in the league as long as their offensive line holds up. I touched on the late-season defensive improvements of the Bengals earlier. They will return six starters on that side and picked up corners Chidobe Awuzie, Mike Hilton and Eli Apple who will all contribute this year.

It’s safe to say it’s going to be an uphill battle for the Bengals this year. They have the 6th toughest schedule in the NFL this season. However, they do have the 2nd easiest schedule in their division (only Cleveland has the easier schedule in the AFC North). Their 2021 opponents had a combined record of 144-128 or a win percentage of 52.9% which means Cincinnati could potentially have their hands full.

There is a lot of winnable games if you look at the schedule though. Their out-of-conference road games are the Bears, Lions, Jets, Raiders, and Broncos. Meanwhile, their home out-of-conference games are the Vikings, Jaguars, Packers, Chargers, 49ers, and Chiefs. It may be a blessing to draw those games at home and maybe there’s a chance they steal three or more of those.

I’ve touched on this win total with my AFC North win totals piece a couple of weeks ago. This is one of my favorite plays on any win totals in the NFL. Cincinnati’s defense showed improvement towards the end of the season, and they’ve upgraded their secondary and retained what is on paper a potent offense.

As I mentioned before, although their schedule is considered one of the toughest in the league, the majority of their tough games will be at home. Given how many offensive weapons lurk on this team, I believe they can get to seven wins relatively easily. I also think there’s some value in placing a small wager on the Cincinnati Bengals to win the AFC North at 25/1, but the safest play here is on the over of their win total.

If there was ever a prop number that was too low, here it is. Tyler Boyd is the somewhat forgotten man by the oddsmakers as he has a lower receiving TDs prop number set lower than both Ja’Marr Chase and Tee Higgins. Boyd displayed great chemistry with his quarterback and had four TDs despite missing his starting quarterback for a portion of the season. I am all over the over here on this number.

Joe Burrow To Win Comeback Player Of The Year

This is a play that I gave out a few months ago and I stand by it. Joe Burrow to win Comeback Player Of The Year feels too easy. He threw 13 touchdowns to five interceptions with 2,688 passing yards in only ten games. Burrow is getting a lot of rave this offseason, and it wouldn’t shock me to see him light it up for 4,000+ passing yards this year which should be enough to win him this award.

Pick: Joe Burrow To Win Comeback Player Of The Year (+700)

SGPN writer Nick Dant and I seem to agree when it comes to Ja’Marr Chase. We both think Chase will have a good season but don’t buy into the hype too deeply. His ADP is 59, which honestly feels a little too high for me. Tee Higgins has an ADP of 71 and Tyler Boyd has an ADP of 86. If I’m drafting any of the Cincinnati trio of wideouts, it’s going to be Boyd.

Running back Joe Mixon has an ADP of 20. While I am high on Mixon, I would not draft him this high as this will be a primarily passing team. If Mixon is still around in rounds 4+, then I’d pull the trigger as he is still useful for his pass-catching ability. Burrow has an ADP of 87 and he is definitely someone to keep an eye on as the Bengals will be throwing the ball a ton.