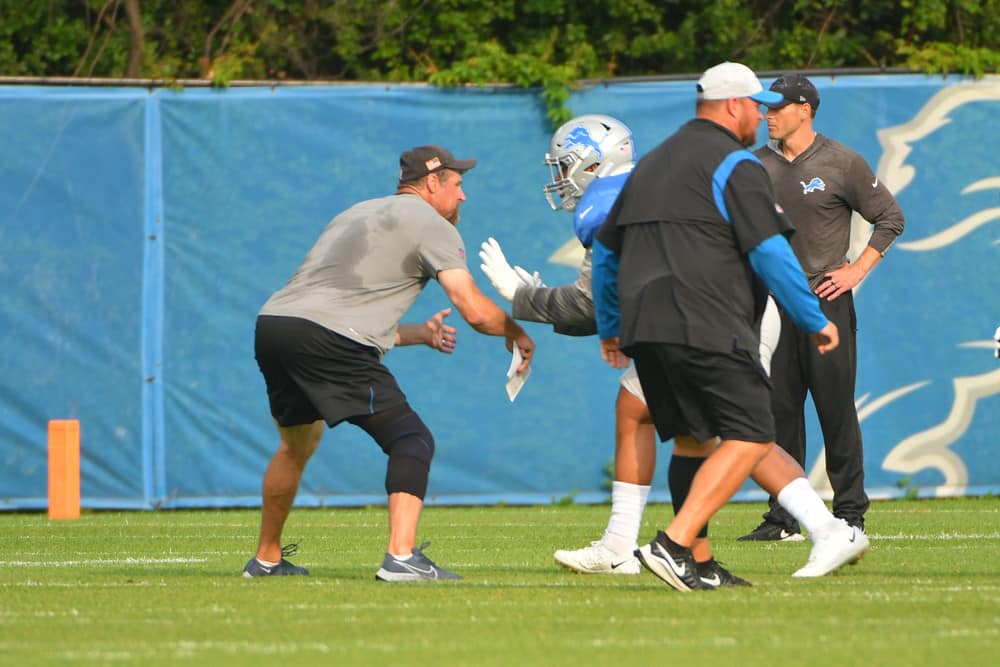 Breaking knee caps, no turds, and a lot of coffee is the motto for the Detroit Lions for 2021-2022 season. The rebuild is definitely underway for the Detroit Lions. Lions hired former tight end coach of the New Orleans Saints, Dan Campbell who is certainly a highly spirited person. There is a brand new coaching regime in Detroit along with a huge roster turnover.  The question is how long will this rebuild take for the Lions?

As I mentioned above there is a new coaching staff for the Detroit Lions across all fronts. A new head coach, a new offensive coordinator Anthony Lynn, and a new defensive coordinator, long-time NFL veteran, Aaron Glenn. Along with that, the Lions traded away long-time franchise quarterback, Matthew Stafford to the Los Angeles Rams for Jared Goff and draft compensation. Furthermore, the Lions lost star wide receiver, Kenny Golladay to the New York Giants.

The Detroit Lions will not return six of their seven wide receivers from last season including Marvin Jones Jr. A new coaching staff and significant roster turnover may result in a long season for the Lions.

The Lions have the sixth toughest schedule in the 2021-2022 NFL season. They also face a very difficult road schedule including non-division road games against the Rams, Steelers, Browns, and Seahawks. As a matter of fact, the Lions face one of the toughest rush defenses in the league this season including nine teams that rank inside the top 10. That adds a lot of pressure on the shoulders of Jared Goff. The combination of Anthony Lynn and Jared Goff does not exactly get me excited.

As if we did not know, the Lions are projected to be one of the worst teams in the league. The odds certainly reflect that. By no means am I going to recommend betting on any of the plus money prices. However, I am not exactly sure the Lions will exceed four wins this season. The combination of a brand new coaching staff, along with significant roster turnover will take time. Not only that, as I mentioned, Anthony Lynn and Jared Goff do not exactly set off the winning alarms. As great of a hype man and motivating coach Dan Campbell may be, I am expecting it to be a long year in Detroit.

Jared Goff takes over the quarterbacking duties for the Lions. This is a brand new team with brand new coaches and brand new receivers. The wide receiving group is rated near the bottom of the league. In addition, I do not trust the play calling and game management by Anthony Lynn and Dan Campbell. Last season with a better wide receiving group in Los Angeles, Goff managed only 20 passing touchdowns.

Jamaal Williams spent the first four seasons with the Green Bay Packers in which was a loaded backfield led by Aaron Jones. However, Williams showed flashes of being a productive running back. In fact, over the first four years, Williams has accumulated close to 2,000 rushing yards. Williams will be second on the depth chart behind Deandre Swift. I believe Williams will get plenty of opportunities in the backfield.

Even with a bad wide receiving group, Tyrell Williams may be a shining star for the Lions’ receiving corps. Scott Reichel is a believer in Williams, as he highlights it in his Underrated Fantasy Football Players on Each NFL Team. Williams has been a consistent receiver throughout his career grabbing at least four touchdowns and 650 receiving yards.

I firmly believe fantasy football players may be too high on Deandre Swift. Again, Anthony Lynn is the offensive coordinator and he mismanaged the entire offense with the Los Angeles Chargers. The Lions face one of the toughest rush defenses this season and for fantasy purposes, Swift may not be an RB1.