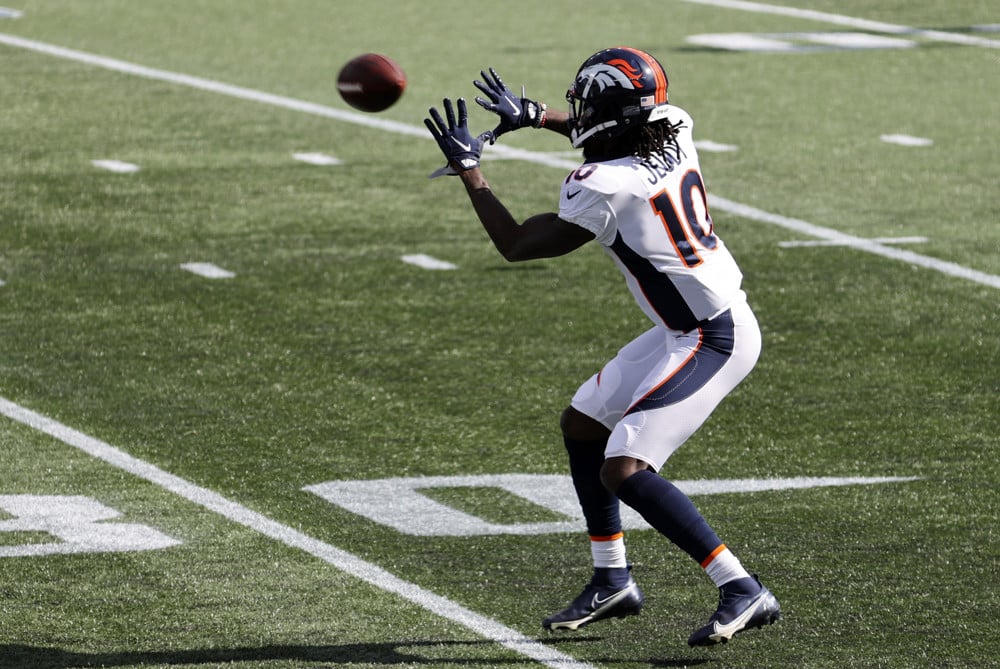 The 2020 Denver Broncos had a disappointing season, to say the least. The Broncos finished the 2020 season with a 5-11 record. In addition, the Broncos dealt with injuries on both sides of the football. On the offensive side, Courtland Sutton, arguably their best receiver, went down in Week 2 with a torn ACL. Along with that, the Broncos lost Von Miller to a season-ending ankle injury and he didn’t play a single snap. Furthermore, the Broncos finished the 2020 season losing five out of their last six games. The biggest question still remains from last season – who will be the starting quarterback for the 2021 NFL season and the foreseeable future.

Although the question still remains on which quarterback will be the starter, the Broncos welcome back familiar faces. Both Von Miller and Courtland Sutton will be ready to go for the upcoming season. In addition, the Broncos traded for quarterback Teddy Bridgewater from the Carolina Panthers for a future sixth round pick. Not only that, the Broncos added Patrick Surtain II with the ninth overall pick in the NFL draft. Also, the Broncos added Javonte Williams to the backfield with their second round pick.

Furthermore, in free agency, the Broncos added Ronald Darby and Kyle Fuller to solidify one of the best secondary in the league. The cliché often said in the NFL is, “they are a quarterback away”. That could not be more true for the Denver Broncos. We still do not know who will be the starting quarterback for the Broncos. As a matter of fact, the Broncos were rumored to trade for Aaron Rodgers or Deshaun Watson. The Broncos struck out on Aaron Rodgers.

The Denver Broncos play in a division where all three teams have great offenses. Yes, even the Jon Gruden led Las Vegas Raiders. The potential is there for the Broncos, as they have a great wide receiver group led by Courtland Sutton and second-year wide out Jerry Jeudy, who is primed for a breakout season.

The 2021-2022 season’s strength of schedule for the Broncos ranks sixth easiest in the NFL. They have games against the NFC East division and the AFC North. Additionally, games against the Detroit Lions, Jacksonville Jaguars, and the New York Jets. The average rank of pass defense and rush defense the Broncos face this season is 19th and 20th respectively. Lastly, the Broncos end the season with three straight division games, two of which are on the road.

There are a few things that are aligning for the Broncos this season. First, they have one of the more easy schedules in the league. Next, they play below average rush defenses and pass defenses. For the Broncos, they need to find ways to win within their own division. Over the last three seasons, the Broncos are 6-12 in the AFC West. If they can find a way to win three games in the division, I believe they have a good chance to secure a wild card spot, led by their defense.

Jerry Jeudy is primed to have a breakout season in the second year of his NFL career. Last season, Jeudy had 52 catches on 113 targets and 856 receiving yards. I know the Broncos get Sutton back this season, but this should not stop Jeudy from having a breakout year. Jeudy can be one of the best route runners in the league and I believe he is primed to have a breakout season for the Broncos and possibly lead this team in receiving yards.

Last season, Fant led the Broncos in red zone targets and had three receiving touchdowns. He is entering his third year with the Denver Broncos and I believe he should be featured in the red zone. Standing at 6’4″, Fant gives the Broncos’ quarterback a big target.

As I mentioned above, the offense of the Denver Broncos certainly has potential. I have not talked much about the running back group of the Broncos. This kind of goes hand in hand on who to fade and who to draft. Melvin Gordon may not be on this roster come September. The Broncos do not seem adamant about re-signing him. Furthermore, the Broncos drafted running back Javonte Williams in the second year of the 2021 NFL Draft. All indications from the Broncos training camp are that the running back job will be Javonte Williams to start the season.