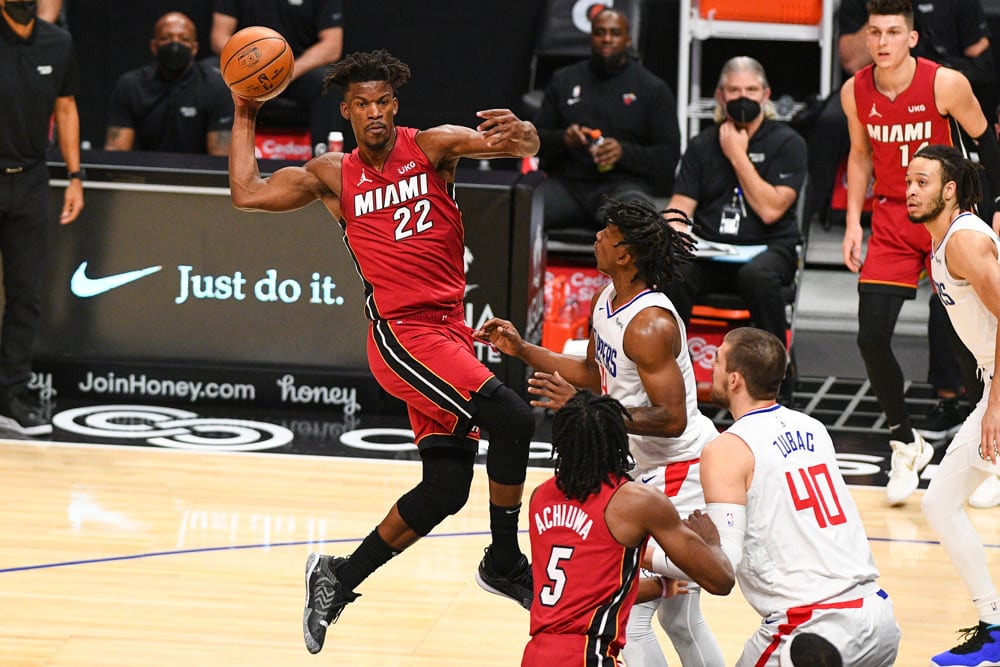 The 2019-2020 season was nothing short of a failure for the Miami Heat. This team that shocked the league with a Cinderella story in the 2019 Bubble followed it up with a roller coaster of a season that included multiple five-game win streaks and losing streaks. They suffered multiple injuries, including to Jimmy Butler, Goran Dragić, and Tyler Herro, and were never able to get a consistent game going. This led to a 40-32 season and a sixth-place finish in the Eastern Conference. Their fan base needs something new to heat up their excitement and that is exactly what they worked towards this offseason. Here is our 2021 Miami Heat preview.

Eric Spoelstra may have just acquired his most talented team since the end of the Big Three Era in 2014. The blockbuster addition of Kyle Lowry is something Miami fans have wanted for a couple of years now. With him, they added some of the grittiest defenders in P.J. Tucker – who can match up on opponents’ best players – and Markieff Morris – a 6’8” wing defender that will fit right into Spoelstra’s infamous zone defense. These two defenders fit in perfectly with the scrappiness and grit of Jimmy Butler.

With the addition of Kyle Lowry, the Miami Heat have finally found their truly elite PG1 – something they have been missing for quite a while. Lowry can do anything from commanding a half-court offense to pushing the pace of the game – the Miami Heat finished near the bottom in pace the last two seasons.

But after Lowry, what depth do they have? With Victor Oladipo out until potentially mid-winter, the Heat are now taking a gamble on a few players. The first being Duncan Robinson, whose performance is at risk of taking a hit after getting paid $90 million. The second, Tyler Herro, who struggled last year to regain the swagger from the Bubble. The third and fourth are two young guards – Gabe Vincent and Max Strus, who Miami fans know dearly since they have been groomed through the Miami Heat farm system.

In the paint, they have a one-two punch at the center position with Bam Adebayo and Dewayne Dedmond. There is a lot to be expected out of Bam this year. His role as a versatile big man will not change but look for him to add more to his game, maybe a three-point shot? And as for Dewayne, he is a stereotypical big causing issues for anyone trying to attack the basket. And as an added bonus, look for Omer Yurtseven to get a few minutes sprinkled into the season. He is another project for the Heat’s development team. He may be a bigger subject matter in a season preview two to three years from now.

The Heat are also dealing with some key losses from their 2019-2020 roster. The biggest loss for the organization, and the fans, is Goran Dragić who played a key role off the bench and would also close out games with the starting lineup. Another loss is NBA Finals MVP Andre Iguodala – a veteran presence who was capable of filling multiple roles when needed. And finally, young guard Kendrick Nunn. Although he was streaky, he was able to provide offense for the second unit and was able to create his own shot.

Last season, the Miami Heat finished 40-32, which is projected to be 46-36 in a full 82 game season. That’s a 46 win season with a basketball squad that could not catch a break with injuries and could not pick up any rhythm during any stretch of the season. Now with the addition of Kyle Lowry, P.J. Tucker, and Markieff Morris, this defense takes a huge step forward. Their three-point shooting behind Duncan Robinson, Tyler Herro, and Max Strus can get them back into any game if their defense falters. This team should be able to achieve at least 49 wins and have a good shot at breaking into the 50s.

For two years in a row, Erik Spoelstra has been voted as the best coach in the NBA by GMs across the league. He now has his most talented team since the Big Three Era and the personnel to run whatever defense he schemes up. A bulk of the Heat’s success could be pinned on his schemes and rotations and he could lead them to a deep run into the playoffs and maybe even a trip to the Eastern Conference Finals. This should be enough to get him his first lone Coach of the Year Award.

This team is built around three players: Bam Adebayo, Jimmy Butler, and Kyle Lowry. The usage rate among these three will range from 20-25% throughout the season, making them primary options while they are on the court. They are double-double prone and provide a solid floor for your fantasy teams. On the flip side, there is Duncan Robinson. Although he is a three-point specialist, seldom does he put up the stats for rebounds, assists, and steals. Although his ceiling is high for a hot game, he is not worth drafting to start your fantasy league.