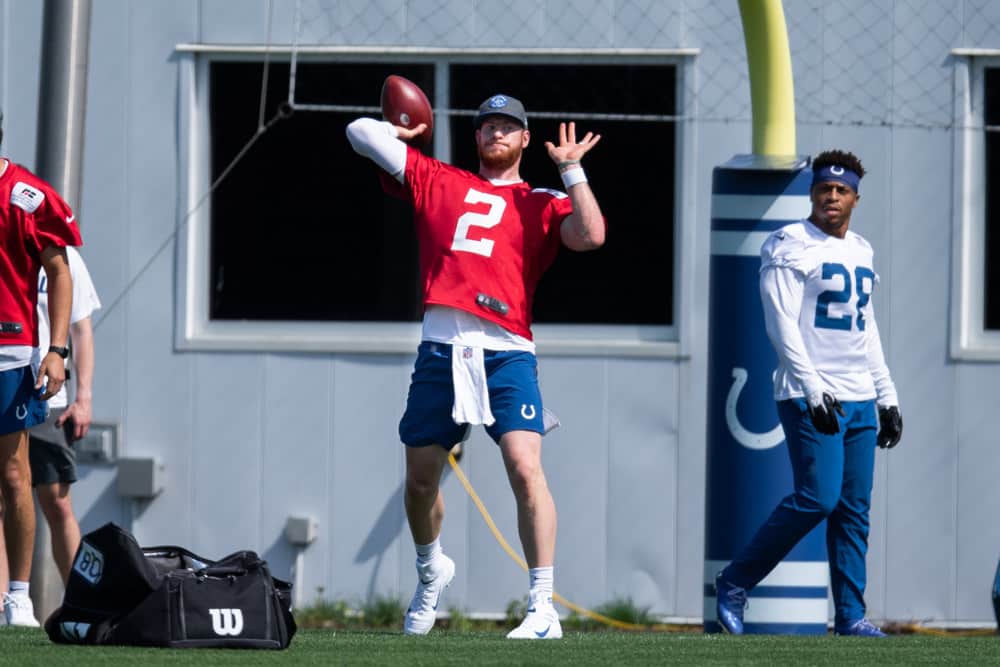 Question: Can Carson Wentz Have a Bounce Back Season?

It might be the understatement of the year to say that Carson Wentz had a disappointing 2020 season. Wentz had a terrific 2019, finishing in the top 10 in passing yards and top 5 in passing touchdowns which placed him as the 9th best fantasy QB that year. Unfortunately for fantasy owners last year, he was unable to build upon that success.

While only playing in 12 games, the former second-round pick threw for 2,620 yards with 16 TDs and 15 INTs. His 218.33 passing yards per game was just 25th best in the league and the 15 picks thrown were tied with Drew Lock for the most in the NFL. Given those numbers, it’s no surprise that Wentz finished outside the top 20 fantasy QBs for the season.

Rewind the clocks to this time last year and Carson Wentz is still the QB of the present and future in Philadelphia. Welp, things can change quickly in the NFL. After the miserable 2020 season, Wentz went to Indy to reunite with HC Frank Reich (the former OC on the Eagles during Wentz’s excellent 2017 campaign).

With the retirement of Phillip Rivers, the Colts sent a 2021 third-round pick and a conditional 2022 second-round pick for Wentz. On paper, it seems like a win-win for both teams. However, the question remains if Wentz can regain his form from the 2017 and 2019 seasons.

Old Man Rivers just threw for more than 4,100 yards (10th highest in the NFL) and 24 TDs (17th highest) with the Colts last year. In most fantasy formats, that placed Rivers inside the top 20 QBs. Let’s face it, the old veteran was washed up. So are you telling me, Wentz can’t at least replicate those numbers?

The Colts had a top 10 offense last year led by a top 5 offensive line. The running game with Jonathan Taylor, Marlon Mack, and Nyheim Hines is excellent and the receiving group combines a craft veteran in TY Hilton with an up-and-comer Michael Pittman Jr. Additionally, the duo of Jack Doyle and Mo Alie-Cox provides dual threats at the tight end position.

There’s not much to dislike about this offense. It all comes down to the man once dubbed “The Ginger Jesus”. If he can’t succeed this year in Indy, he’s got a lot of clipboard holding in his future.

Currently, with an ADP as the 22nd QB taken off the board, I’m buying in on Wentz. He will outperform at least five QBs with higher ADPs. There’s fantasy football value in Carson Wentz in his first AFC South season.

Question: Does Julio Jones have value at his current ADP?

As a Julio Jones owner a year ago, I can attest that it was a frustrating season. The veteran wide receiver only suited up for nine games catching 51 passes for 771 yards and 3TDs.  Eventually, it had become clear that Calvin Ridley had become the Falcons’ WR1 which made the 10-year veteran expendable.

With that said, the trade to Tennessee should be viewed as a blessing for Julio Jones. He’s now on a contender with a better offense that’s led by a better QB. The Titans’ offensive line is better than the Falcons and the ground game, led by Derrick Henry, is one of the best in the league. There are not many better situations to spend the twilight of your career than in Nashville.

While Jones will certainly help the Titans win football games, how will that translate into fantasy production? First off, AJ Brown finished as a top 10 fantasy WR last year, catching 70 balls for more than 1,000 yards and 11 TDs. He is still the WR1 on the Titans and I’d expect even better stats for Brown this coming year. The main question is if the Titan offensive can support a second receiver being drafted at Julio’s ADP (40th).

The Answer:  Sort of…

You do the math – in a standard 12 team league, Julio Jones is being drafted in the early to mid 3rd round. Last year, the Tennessee passing offense only finished as the 23rd team in passing yards. Corey Davis, now on the Jets, was the WR2 and he caught 65 balls for 984 yards and 5 TDs which ranked him inside the top 30 fantasy WRs.

While those numbers aren’t going to wow anyone, I expect the Titan passing attack to make big strides this year. First off, the defense has eroded into a bottom-half unit in the league. Even if HC Mike Vrabel would prefer to run the ball, he may need to pass more often to keep up. Second, you can’t ignore the mismatch issues with both AJ Brown and Julio Jones lining up on either side of the field. Lastly, Ryan Tannehill is primed for a huge season and will finish as a top 10 QB.

Back to Julio, at this point, we probably shouldn’t expect him to play a full season. However, there’s definitely still gas left in the tank. He’s an obvious upgrade over Corey Davis and will outproduce what Davis did last year. If the Titans receivers play the majority of the season, Brown will put up 1,400 yards with double-digit TDs and Jones will amass 1,200 yards with 8-10 scores.

As far as ADP value, those numbers would place Julio right around where he’s being drafted – as the 14th WR off the board. The WRs following Jones’s ADP are the likes of Mike Evans, Adam Thielen, and CeeDee Lamb. Give me Julio over that trio all day long.

In the other direction, the WRs in front of Jones are Allen Robinson, Terry McLaurin, and Keenen Allen. It’s close but I prefer that group over Julio which means he’s being drafted in the right place. When it comes down to it, you’re going to want pieces of this Tennessee offense, Julio Jones included. An easier AFC South schedule will help Julio be fantasy football relevant this year.

Question: How will the Rookies Fare?

The Jags have to be the top candidate in the NFL for fantasy football uncertainty. The team had the 30th total offense in the league a season ago. Now they welcome in a new head coach, a new QB, and a new RB. This should be interesting.

The Head Coach is Urban Meyer, of course. The long-time college ball coach, with three national championships to his name, has never coached at the NFL level in any capacity. Darrell Bevell was brought in as offensive coordinator but in the same role in Detroit, his offenses only finished 20th and 18th in the league the last two years. He had more success in Seattle where he was responsible for top 10 offenses from 2012 through 2015 but was fired after a couple of sluggish seasons (read more here). It was important that Meyer hired someone with NFL experience but Bevell’s track record is spotty.

The new QB is Clemson’s Trevor Lawrence, who the Jags took with the first overall pick in this year’s draft. He’s pro-ready and should step in Day One as the starter. However, Jacksonville doesn’t have the best offensive line to protect him. They return all five starters from last year but were ranked as only the 22nd best unit in 2020.

Jacksonville’s other first-round draft pick, also from Clemson, was Running Back Travis Etienne. I expect a timeshare in the Jaguar backfield with Etienne and James Robinson, but the rookie has more upside. Not only is he effective between the tackles, but Etienne also caught more than 100 balls in his collegiate career. The plan will be to get creative with Etienne and line him up all over the field.

Trevor Lawrence obviously has a very bright future. However, he also currently has an ADP as the 14th QB taken off the board. That’s just too high. I don’t trust Urban Meyer on the NFL level, I don’t trust Bevell to be an effective OC, and l don’t trust a rookie QB behind a bad offensive line. There are at least 5 other QBs with lower ADPs that will finish above Lawrence this year.

On the flip side, Etienne is an interesting prospect. Here’s what we know:  Jacksonville isn’t very good which will lead to a large number of passing attempts vs soft defenses; Lawrence should be very comfortable with dropping the ball off to his college teammate; and Etienne excels at catching the ball out of the backfield. That sounds a lot like a PPR dream.

Of course, the RB’s stock is limited by the presence of James Robinson who just ran for more than 1,000 yards in his rookie season a year ago. However, you don’t draft a running back in the first round and not expect to use him. Etienne’s current ADP is 63rd which places him in the 5th round in most leagues. While I wouldn’t feel comfortable any sooner than the 5th, if he slips down the draft board, scoop him up quickly. Travis Etienne is a good bet to surpass his ADP this season. The AFC South is chock full of valuable fantasy football running backs.

Question: Is Anyone Worth Drafting?

I mentioned how quickly things can change in the NFL. It was just the 2019 season when Houston was a playoff team and Deshaun Watson was one of the best QBs in the league. Due to Watson’s legal troubles (22 lawsuits pending) he appears to be done in Houston which means we have a new projected starter at QB and a new Head Coach for 2021.

The new coach is Baltimore’s former assistant and passing game coordinator, David Culley. To be honest, I don’t know too much about the guy but his biggest challenge will be playing with a depleted roster that lacks talent.

The projected starter at QB is the veteran Tyrod Taylor. I’ve been a fan of Taylor since his days in Buffalo, and while his skills are limited, the guy is a proven winner. Expect a couple of upsets this year where Tyrod leads the Texans to surprising victories.

Other than the QB position, the backfield is very crowded with David Johnson returning and Phillip Lindsay and Mark Ingram new to the team. At wideout, Brandin Cooks is a professional WR but there’s a pretty steep drop-off after him. In general, there’s not a lot to be excited about this season if you are a Texan fan.

The Answer: Not really

So let’s break down each position. While I root for Tyrod Taylor, he’s a game manager with limited fantasy upside. Assuming 3rd round pick, Davis Mills is not ready to contribute this season, it should be Tyrod’s team. I suppose he’s a solid fantasy backup and you can grab him dirt cheap but let’s be honest, in most leagues, Tyrod is going undrafted.

In regards to the backfield, David Johnson finished inside the top 20 fantasy RBs a season ago. He had some solid games and was useful as a flex play or RB2 occasionally, but he’s entering his 7th season in the league and has an injury history. Johnson’s best days are behind him. The same can be said for Mark Ingram who is entering his 11th season. If Ingram sticks with the team and is on the roster to start the season, he could be just annoying enough to vulture some TDs from the other backs.

I’m also a Phillip Lindsay fan. However, after two 1,000 yard seasons in Denver, Mr. Undrafted fell out of favor and left for Houston. He’s the youngest of the three running backs and offers the most upside. While worth a late draft pick, don’t expect too much – the offensive line isn’t very good and the other backs will still get touches.

At wide receiver, Cooks could be an interesting play based on potential volume alone. Who else is Houston going to throw the ball to? Cooks is a 5-time 1,000-yard receiver and is being drafted as the 38th receiver off the board. If you can get a team’s WR1 in the 8th round, then, by all means, make that pick. In an otherwise talented AFC South, avoid this team for fantasy football purposes.