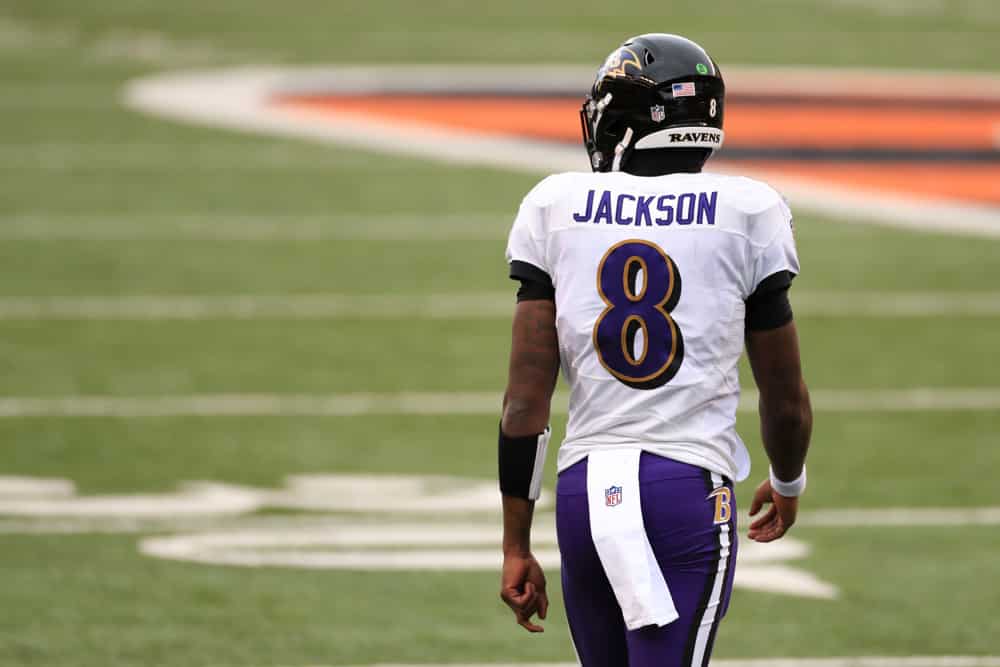 Question: Where would I Draft Lamar Jackson?

2020 was a season to forget for the 2019 NFL MVP, Lamar Jackson. As the chart below illustrates, other than rushing TD’s, Jackson’s stats took a precipitous dip in every category. Not exactly what fantasy owners expected when drafting the QB extremely early. When evaluating a young QB, you look for continual, season-over-season, improvement and that just didn’t happen last year. An even deeper dive can be found here.

Even with Jackson’s struggles, he still managed to finish as a top 10 QB in most scoring formats. The problem lies with his return on investment, or lack thereof if you spent a second-rounder on the QB. His overall ADP was 20.9 which placed him as the second QB off the board. Instead of burning that early of a pick on a Quarterback, you could have taken someone like Ryan Tannehill at an ADP of 159.2 (21st QB taken) and got similar production. In fact, Tannehill finished slightly higher than Jackson in most formats.

So here we have a former MVP coming off a down season and entering a year where the QB position is loaded with fantasy depth. His ADP this season is 38th overall or the 4th QB taken. The question remains if Jackson can bounce back or if defenses have “figured him out”.

The Answer: I’m Passing on Jackson

Looking at the Ravens offense, at least the organization attempted to upgrade the WR position. Willie Snead has departed, but Sammy Watkins joined via free agency and Baltimore drafted Rashod Bateman in the first round. They need Bateman to make an immediate impact. Marquise Brown is strictly a deep threat playing with a QB who doesn’t throw a good deep ball and Sammy Watkins, at this point in his career, is average at best.

For me, the late third round or early fourth round it’s just too early to take a QB. Especially one that doesn’t excel at throwing the ball down the field. Jackson’s rushing abilities provide a very safe floor, and he’ll have some huge games, but consistency will again be an issue. It’s troubling that he regressed in his third season and I’ll let other owners roll the dice on him. There are a few better fantasy football quarterback options in the AFC North.

Question:  What Kind of Stats will Ja’Marr Chase put up?

In previous years, it was typical for first-year WRs to only have mediocre rookie seasons. For example, let’s take a look at the rookie campaigns for the current top three fantasy wide-outs:  Davante Adams caught 38 balls for 446 yards and 3 TDs back in 2014; Tyreek Hill finished 2016 with 61 catches for 593 yards and 6 TDs; Stefon Diggs pulled in 52 catches for 720 yards and 4 TDs in his first season.  Not all that impressive, right?

It used to be the norm for a rookie WR to only show flashes of brilliance in their first season before really making a splash in the second or third year. Then, Justin Jefferson and 2020 happened. Last year, as a rookie, Jefferson caught 88 balls for 1400 yards and 7 TDs while starting just 14 games. Is this the new normal? Passing is king in modern football. Do we need to adjust how we view rookie WRs or was Jefferson an aberration?

Like Jefferson, Ja’Marr Chase played his college ball at LSU and is now reunited with his college QB, Joe Burrow. When looking at the Bengals potential passing attack, there’s a lot to like. The trio of Tyler Boyd, Tee Higgins, and Chase is one of the youngest and most dangerous group of receivers in the league.

The one thing possibly holding back the Cincinnati offensive is a huge question mark concerning their offensive line. I was not alone in thinking the Bengals should have drafted OL instead of WR in the first round of this year’s draft. The team did get OT/OG Jackson Carman in the second round and signed Riley Reiff to play Right Tackle, but this line is still only projected to be the 24th best in the league.

Let’s start with similarities. Both Chase and Jefferson were highly regarded first-round picks out of LSU. You could even argue that Chase was a better overall prospect, being drafted at #5 compared to Jefferson going off the board with the 22nd pick. Both play on teams with at least adequate QBs who can get their receivers the ball. If anything, Burrow has a much higher ceiling than Kirk Cousins. Lastly, both offensive lines are not very good.

The main difference between both situations was the lack of receiver depth in Minnesota last year. Adam Thielen is a solid wide-out but it didn’t take Jefferson long to become the top option on the team. In Cincinnati, Tyler Boyd is similar to Thielen. He’s a rock-solid, professional WR with two 1,000 yard seasons under his belt. Plus, Tee Higgins was a second-round pick just a season ago who had an impressive rookie campaign himself, catching 67 balls for 908 yards and 6 TDs. There will be three WR mouths to feed in Cincinnati compared to just two in Minnesota.

Overall, Ja’Marr Chase has a very bright future and he’ll have a nice rookie season, especially if Burrow can stay upright. However, he’s not going to finish as a top 10 fantasy WR like Jefferson did in 2020. I’m currently seeing Chase as the 33rd receiver being taken in fantasy drafts. Both Higgins and Boyd (27th and 31st) are slightly ahead of him. The Steelers are the only other team with three WR’s in the top 35 (Diontae Johnson – 24th, Claypool – 26th, and Smith-Schuster – 29). You better really believe in these passing attacks to draft each team’s 3rd option that high. The Bengals could have a prolific fantasy football offense, and not just in the AFC North.

Before we can begin to answer that question, let’s see who the contenders might be. First, a handful of Round 1 receivers should be in the mix, which includes:  Ja’Marr Chase (Bengals), Jaylen Waddle (Dolphins), DeVonta Smith (Eagles), Kadarius Toney (Giants), and Rashod Bateman (Giants). We definitely need to include TE Kyle Pitts in the conversation as that guy is going to line up all over the field. Add in other running backs in Travis Etienne (Jaguars) and JaVonte Williams (Broncos), and there’s the pool of rookies capable of having the best fantasy season.

In regards to Najee Harris specifically, he should be in for a monster year. No other running back on the Steelers (Benny Snell, Anthony McFarland, Kallen Ballage), possess Harris’s blend of power and speed. He’ll be the bell cow in Pittsburgh from Day 1. There’s a reason why the Steelers used a first-round pick on him and RB is typically the easiest skill position for a rookie to excel at.

It appears that Mike Tomlin wants to get back to running the football. After a couple of seasons towards the bottom of the league in rushing yards, Pittsburgh re-emphasized the ground game and finished 15th in 2020. Drafting Harris is a clear sign that they intend to improve this aspect of the offense even more. The biggest challenge will be the shaky offensive lineman only projected at 29th best this year. Obviously, a bad line has the ability to limit Harris’s effectiveness.

Looking at the other potential candidates, the WR’s won’t be in contention. While talented, they either don’t have clear paths to be their team’s WR1 or they are stuck on mediocre to bad passing attacks. The one player to keep your eye on is the Tight End, Kyle Pitts. He has a real opportunity to flourish this year in Atlanta and could push Harris. As for the other running backs, they are more likely stuck in timeshares.

No other rookie finds themselves in a better situation than Najee Harris. Of course, you wish the offensive line was better but the Steelers will still manage to get the ground game going. Looking at ADP, Harris is currently at 30th overall while all of the WRs are 85th or higher. Etienne is second highest at 73 with Pitts at 76 and Javonte Williams at 80. Just looking at ADP numbers alone it’s obvious that Najee Harris has the highest ceiling.

I’ll call it now – Najee Harris will rush for 1,000 yards and 10 TDs which would place him around the 10th-12th best RB from a fantasy perspective. Right now he’s being drafted as the 17th RB off the board so there’s value here. I’m all over Harris in the 3rd round and you should be too. Harris is one of the better fantasy football running back values in the AFC North.

Question: Can OBJ Bounce Back?

Somewhat amazingly, the Browns had a stable offseason and enter 2021 without a lot of questions on the offensive side of the ball. Baker Mayfield will always have his doubters, but he’s at least a solid QB and we know what to expect from a fantasy perspective. The same can be said about Nick Chubb, Kareem Hunt, and the rushing attack. Jarvis Landry is a decent WR3 that lacks upside and the TE’s are serviceable but should not be counted on for consistent production. That really leaves us with one glaring question:  what should we expect from Odell Beckham this season?

Even if you throw last year’s injury season out the window, his production has been on a steady decline. ODB went over 1,300 yards and at least 10 TDs in each of his first three seasons in the league. Even in his last season with the Giants, the wideout was on pace for similar results if he didn’t miss four games due to injuries. The move to Cleveland hasn’t come with similar production. Beckham Jr was mostly healthy in his first year with the Browns but only caught 74 balls for 1,035 yards and 4TD’s.

Last year, ODB played in only seven games and caught 23 balls for 319 yards and 3 TDs. Extrapolate those #’s over the course of an entire season and you finish with a 52-729-6 stat line. That’s definitely not WR1 material. For reference:  Greg Ward caught 53 passes last year; Jakobi Meyers accumulated 729 yards, and Tim Patrick scored 6 TDs.

The Answer:  Don’t Bet On It

I’m not saying Odell’s career is over but if you are expecting a bounce-back season where he puts up similar numbers to his years on the Giants, you’re crazy. The injuries are piling up. Last year, it was the torn ACL. There was a fractured ankle in 2017 and a quad injury in 2018. Even in 2019 with the Browns, he missed a game with a groin strain. At this point, can you rely on ODB to play a whole season without getting hurt?

Additionally, Beckham has always been extraordinarily talented and teams were willing to deal with his drama because of what he brought to an offense. Those days might be over. ODB better be on his best behavior or the Browns could part ways with the receiver. If the production is no longer there, he may not be worth the headache.

While some may be higher on Odell than me (see above), it’s obvious that the guy is on the decline. He’s currently being drafted as the 28th WR off the board which equals a 5th or 6th round price tag. At that cost, I’m passing. Of course, he’s worth a shot if he slips another round or two just don’t draft him too early and expect a huge year.