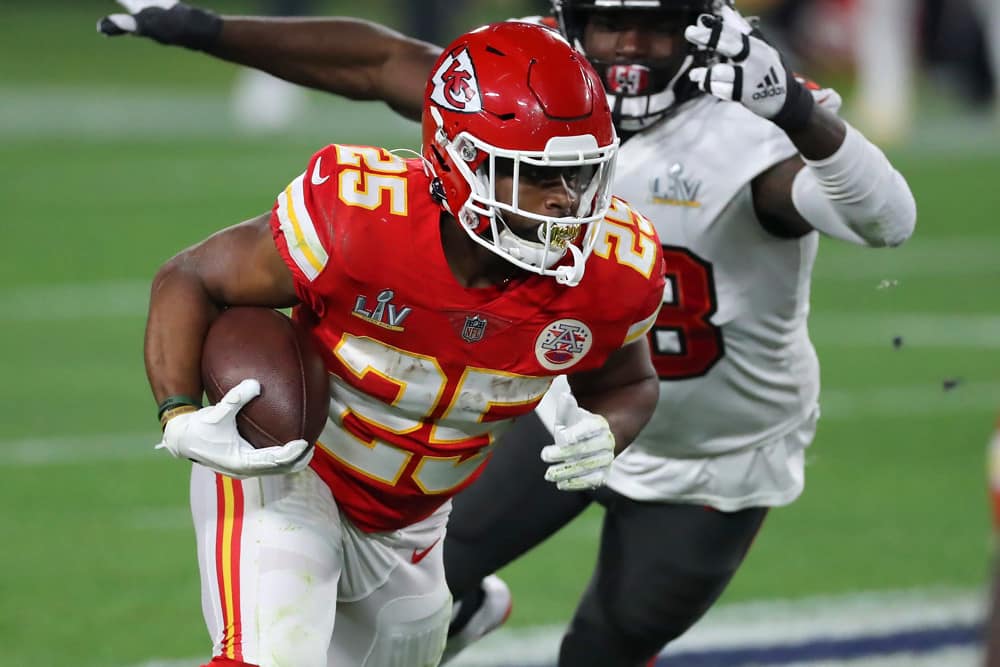 One of the most antagonizing things in fantasy football is a player that you KNOW can be an asset, however, for a variety of reasons they just do not put it together. And after an abysmal season, it can be extremely hard to ever trust that player. Let’s look at the fantasy busts of last football season and decipher who is primed to bounce back from a disappointing season.

So, let’s nip this misconception in the bud right now. These players are in the National Football League! They are the best football players in the WORLD!! These players are in no way losers or busts in terms of football talent, however, in regard to their fantasy output. They were not the most optimal players last season relative to their Average Draft Position (ADP).

To be determined a “fantasy bust”, the player must have met these criteria:

• Cannot have missed 25% of their games due to injury.
• Significant drop in ADP relative to the player’s skill position.

I have a hard time deeming someone a “fantasy bust” if their season was derailed by an injury. Does that suck? Of course! However, injuries are impossible to predict and are to no fault of the player.

We want to get the best bang for our buck. If I’m drafting a player in the first round of my draft, then I am expecting a significant contribution from that player. If that does not happen, not only did I screw myself but also, I helped my opponents by allowing them the opportunity to select another player who can provide value to them.

Yes, Lamar Jackson finished as a top ten QB in 2020 when he finished as the QB8. However, Jackson had an ADP of QB2 and was going in the second round of drafts. A significant jump from where the 8th QB on the draft board was going in round eight.

Jackson’s 2020 season was the tale of two Lamars. He had an extremely slow start to the season as he only averaged 20.3 fantasy points per game the first half of the season. That was good enough to frustrate so many fantasy managers as he was the QB11 during that span that expected QB2 value.

But after that Jackson wanted all the smoke! From week nine on, Jackson was the QB5 and averaged 24.6 fantasy points per game—third-best in the league during that span.

What happened? He began using his legs more. In the first half of the season, Jackson averaged 9.4 rush attempts and 58.7 yards per game. In the second half, he skyrocketed to 11.6 rush attempts and 74.3 yards. Tack on the extra three rushing touchdowns he produced in the last half of the season, Jackson cemented that most of his fantasy production is going to come on the ground.

2021 Outlook: I believe his season will look more like the second half of the season than the first half. The fear of the emerging J.K. Dobbins will help take the pressure off of Jackson like it did the second half of the season. Also, the addition of receiving weapons like Sammy Watkins and rookie Rashod Bateman will only help an offense that ranked dead last in passing yards per game.

To say Wentz had a disappointing season is probably the nicest way to put it. Fantasy managers and Philadelphia Eagles fans could probably use a lot of nastier words that I should not repeat in this article. Wentz was drafted as the QB10 and fell all the way to QB22 by the time he was benched in week 14.

Wentz’s 218.3 yards per game were bottom ten in the league for qualified quarterbacks. Interceptions were also a major cause for his benching. Wentz threw a career-high 15 interceptions and was tied with Drew Lock for last in the league. His 57.4% completion percentage was second only to Lock for worst in the NFL.

And even through his trials and tribulations during the 2020 season, Wentz showed flashes of the QB fantasy managers expected. Wentz was a top 12 QB four weeks during the season, one of which he vaulted into the top five. Wentz was not the classic definition of a fantasy football bust or the worst of the busts last year.

2021 Outlook: Change of scenery might be the best thing for Carson Wentz. Reuniting with an old flame in head coach Frank Reich, who was Wentz’s offensive coordinator during his near MVP season, might be the spark that he needs to thrust back into the spotlight and save his career. During that season, Wentz posted a 7.5 touchdown percentage and 78.5 QBR—both by far the highest in his career. While he may not reach those marks in the Colts’ run-first offense, which was top 10 in run play percentage in 2020, I expect him to far outplay his QB22 ranking last season and thrust back into someone fantasy managers should be targeting late in drafts.

I do not think there was a running back (uninjured) that was more disappointing last season than Clyde Edwards-Helaire. The hype was there. The talent was there. He just did not produce and was one of the more prominent fantasy football busts.

After the 2020 opt-out of Damien Williams, CEH’s main competition in the backfield, he rose as high as RB5 in ADP. And for good reason! Ten times has Andy Reid coached his starting running back to an RB5 or better finish. Unfortunately for CEH, his ranking crashing down to RB22 by the end of the season.

CEH struggled all season putting the ball in the endzone. He led the team with 35 red zone looks but only came out with four rushing touchdowns on the season. CEH averaged only 61.8 rushing yards per game and 22.8 passing yards per game. He will seriously need to improve on his 4.4 rushing yards per attempt if he is ever going to live up to the hype that was built for him prior to last season.

2021 Outlook: There is no doubt that there is a lot of mouths to feed in Kansas City. Even though CEH had a disappointing rookie season compared to his RB5 ADP, there is a reason for optimism. The fact is he is still the starting running back in an Andy Reid and Patrick Mahomes-led offense. He is going to get the opportunity to be great behind a fortified offensive line. But considering the other options to go to in that offense, I have CEH penciled down as an RB2 with RB1 upside.

Somehow James Conner made the criteria for this list. With the injuries we are used to seeing from him, it is surprising that he did not miss at least 25% of the season. And if you mustered the strength to play him when he was active—you were severely disappointed.

Conner had an ADP of RB15 going in the second round of fantasy drafts. After another injury-ridden season, he finished as RB27 with only three top 15 weeks to show for it. Conner actually finished the season with more weeks with less than five fantasy points (4) than top 15 finishes.

It’s really hard to say what Conner did well because he did not play enough. While he met the criteria to be a “fantasy bust” he still did not see the field as much as he should have in the games he played. When he did, he averaged 55.5 rushing yards per game and only averaged 12.7 fantasy points per game. Significantly down from his breakout season in 2018 where he averaged 74.8 rushing yards per game and 21.5 fantasy points per game.

2021 Outlook: Another new face in a new place. It is tough to gauge what Conner’s new role will be in Arizona. With the departure of Kenyan Drake, it will be Conner and Chase Edmonds battling for the starting job. Even with that up in the air, the Cardinals’ offense proved last season that it can support two top 25 running backs. Conner is in the RB3 tier for me that can easily move up given health and a healthy share of the workload. Many players become busts on a new team, but Conner can buck that trend this fantasy football season.

Regression is the keyword for Cooper Kupp’s 2020 season. It was expected after his incredible WR4 finish the season before. His regression was baked into his ADP at WR15, however, he still finished below that at WR22.

Touchdown regression was a major reason for his disappointing season. In 2019, he finished the season second in the league with ten touchdowns. 2020, he only had three. Despite catching nine more passes in 2020, Kupp’s yardage total dropped from 1,060 yards to 974 yards. He struggled with consistency throughout the year ending four games of single-digit fantasy points.

2021 Outlook: The Rams feel like they got the upgrade at quarterback they were looking for after trading Jared Goff to Detroit for Matthew Stafford this offseason. Kupp’s new role is still to be seen after being regarded as Goff’s safety blanket for so many seasons, but I still love his outlook in this new offense. He is known more for his work in the slot and has seen his air yards per catch go down in his three seasons which is a big concern. I will trust that Sean McVay keeps one of his top guys heavily involved though. I like Kupp as a WR2 and to bounce back from a rough 2020.

D.J. Chark’s season was extremely tough to see because even though he had questionable quarterback play he was expected to make another leap forward last season. Deemed as a potential breakout, Chark was thought to be a season at his ADP of WR20. That could not be more wrong as Chark finished the season as WR49.

Chark finished the season with seven games with under ten fantasy points. Not only did Chark battle nagging injuries all season, but he was severely plagued by his poor quarterback play. He fell off from a strong 2019 season. Chark dropped from 73 receptions for 1,008 yards in 2019 to 53 receptions for 706 yards in 2020. He did show flashes finishing twice with over 27 fantasy points and two top-five weekly finishes.

2021 Outlook: Out goes Minshew Mania and in comes Sunshineeeeeee. Trevor Lawrence has been regarded as the most pro-ready quarterback since Andrew Luck. And even with the likes of Marvin Jones, Laviska Shenault, and Travis Etienne, it is clear cut that Chark is still the number one receiving option in this offense. I expect a bounce-back WR2 season for Chark as long as Tim Tebow does not cut into his workload.

Oh, how it hurts my heart to put a New York Giant on this list. However, somehow in his first Pro Bowl season, Evan Engram fell from his ADP of TE7 to TE15. Even more shocking, he dropped after playing all 16 games.

The workload was not the issue for Engram. He led the team in targets and second in receptions. His issue was the same as it was his whole career up to this point. He finished second in the NFL in dropped passed with 11.

And the touchdown bug stayed far away as Engram only had one touchdown on the year. Partially, the fault of the regression of the entire offense, Engram did not help fantasy managers in a position where it is so important that you hit on the tight ends that you spend significant draft capital on. Engram out-produced most other busts, but was a disappointment given his fantasy football ADP.

2021 Outlook: The Giants offense is going to look brand new with the additions of Kenny Golladay, Kyle Rudolph, and rookie Kadarius Toney. Not to mention the return of superstar running back Saquon Barkley. If Daniel Jones can make progressions as a quarterback this offense can be dynamic, which would at least open the door for Engram to be fantasy-relevant again. I expect him to get enough work to still be a low-end TE1, even with all the mouths to feed.