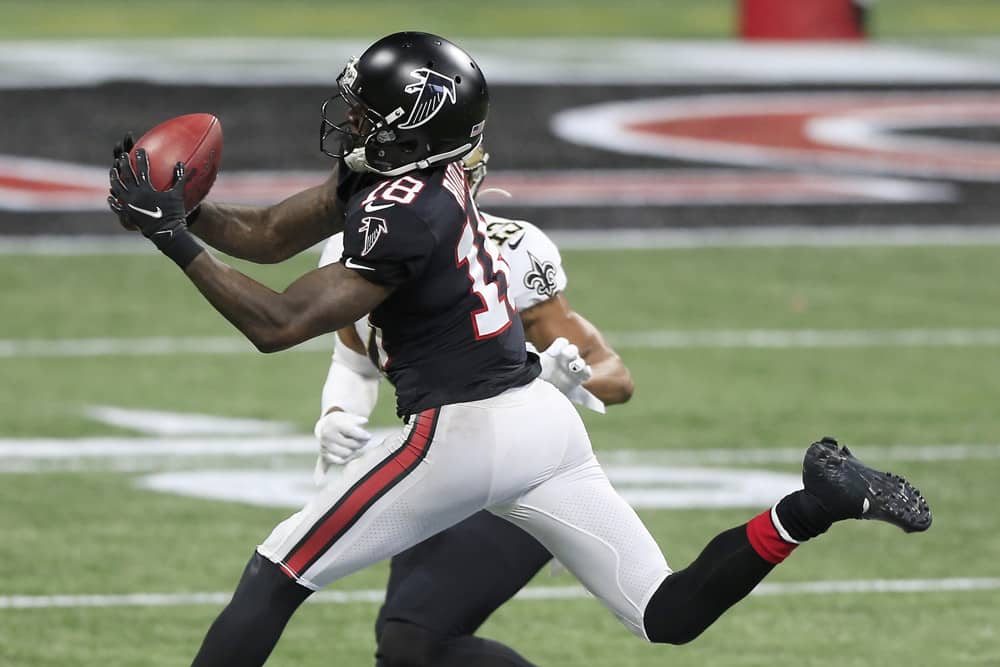 The Fantasy Football offseason does not exist for all you hardcore dynasty players out there. Right now as redraft leagues are getting started organizing and planning, dynasty players are drafting, wheeling, and dealing for the 2021 season. The best part of dynasty fantasy football is the year-round nature of it and the continual trade talks via text, call, and more. To help facilitate your trades here is the June update of the SGPN Dynasty Trade Value Chart. (If you really want to look back, here is the March Update). Use this chart as a jumping-off point for your discussions, and if you are interested in the methodology, read below about it and download the raw spreadsheet as well.

The general methodology for this dynasty trade value chart is that players who score more fantasy points on a per-game basis are valuable, obviously. For each position, I calculated a “replacement level value” or what you can most likely find on the waiver wire at a given position. How many points above replacement from 2020 is factored into the final trade value. This is not a perfect system, but it provides a solid part of the formula.

It also factors in the consensus FantasyPros Dynasty Rankings in a player’s overall ranking and the variability in their rankings. This ties in new opportunities for players and other factors as well, it is also used heavily in considering rookie values, but more on that in a minute. Additionally, the variance between a player’s high and low ranks is also factored in for a “Variability” factor which is also used in the final formula. The higher the variability, the more value a player will lose.

Since this is a dynasty trade value chart, age and longevity have to be factored in as well. That varies by position and the longer a player is likely to be relevant increases their value.

Lastly, the tier that a player falls into and some manual adjustments are considered as well. Sure, this is not a perfect formula and no trade value chart/calculator is. Consider this another tool in the box for you. If you do not care about the methodology, sorry to bore you. If you want to know more, download the Excel Spreadsheet and tweak the values/formulas for yourself!

If your dynasty league has not drafted yet the 2021 Values reflect players available at the various picks. Moving into 2022 there is a slight uptick because there is some variability in year-to-year draft classes. The 2022 values would also apply to 2023 as well. Projecting the values of dynasty draft picks in a trade value chart is challenging, but these values are based on realistic valuations.

Now that we know where the rookie quarterbacks have landed we can have a preliminary ranking of them. Trevor Lawrence has a slight edge over Justin Fields right now because T-Law is the clear starter as of now. Sure, we all know that Fields is the best quarterback in Chicago and will likely go to the moon like Dogecoin before too long, but for now, his value is slightly suppressed. Fields has an incredibly talented corps of pass-catchers in Chicago. With his speed and arm talent he looks every bit the part of a starting quarterback and should finish as a top-ten quarterback this year. The lack of production and some unknowns are presently suppressing his trade value on this dynasty chart, but early in the season, this could change quickly.

Justin Fields is the most accurate QB we've charted in College Football.

How will that translate to the NFL?https://t.co/cWysABqFB2

Similar to the rookie quarterbacks, we now have a better idea of the value of various rookies. Right now Najee Harris is the top-ranked and most valuable rookie back, but before long he could be the fourth-best back. Javonte Williams, Michael Carter, and Travis Etienne all could jump in value as the season approaches and begins. They have a path to being the dominant backs in their respective offenses while Harris plays in a pass-first offense. The guy you really want to watch though is Trey Sermon. Sermon plays in a running back-friendly Shannahan offense and he could quickly emerge as the RB1 in that offense. The 49ers do not have much invested in the rest of their backs so Sermon could find himself as the lead back before Week 6 and a late riser on the dynasty trade value chart.

Trey Sermon is a DUDE pic.twitter.com/n8ig7NHAze

Keeping with the rookie values theme, this section starts and ends with Ja’Marr Chase. Chase not only reunites with his college quarterback but he steps into an offense where he can easily walk into 100+ targets in his rookie year. Last year Tee Higgins just missed out on being a top-20 wide receiver despite not playing with Burrow for half the season. Chase can do all that and more in the 2021 season and do not be surprised if he has a Justin Jefferson-esque season. With his speed and hands, he can be a truly special receiver.

There is a clear top-tier of three tight ends. Travis Kelce, George Kittle, and Darren Waller are firmly established as the Holy Trinity atop the tight end game. With the departure of Julio Jones, Kyle Pitts looks like he might emerge as a cheat code as a tight end/wide receiver option in Atlanta. If you are not lucky enough to land one of these top four tight ends you will be scrambling. One guy to watch is Donald Parham. Parham is a 6-8 beast who dominated the XFL and flashed some potential last year. In a pass-happy Chargers’ offense with a large share of vacated targets with Hunter Henry’s departure, he could emerge as a big-time option who climbs the dynasty trade value chart.

#Chargers not brining back Hunter Henry could be a sign of faith in 6'8 TE Donald Parham.

Still only 23-years old, despite a limited role on offense behind Henry, caught 3 TDs last season.

Parham runs 4.6 with 7-foot wingspan and a 36-inch vertical leappic.twitter.com/pMc0mG72Np