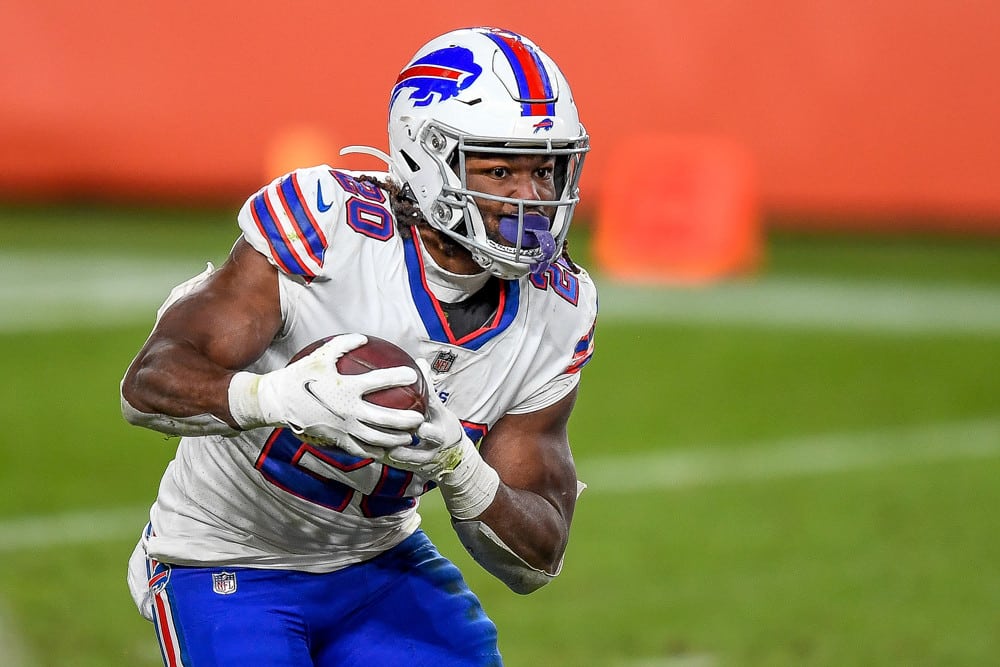 We’re going division by division answering each team’s biggest fantasy questions and it’s AFC East time. Check out the columns on the NFC East, NFC North, NFC South, and NFC West if you missed them. Also, see my column from last year to see how my 2020 AFC East predictions fared.

Question: How Valuable are the Bills Running Backs?

Buffalo’s offense in 2020 was a complete juggernaut. The Bills finished with the second-most yards from scrimmage and the second-most points scored in the NFL. Josh Allen and the passing game was unstoppable, averaging 288.8 yards per game. Of the 56 TDs scored on the year, 40 of them came through the air.

While the passing attack was lights out, the ground game was just average. The Bills rushed for only the 20th highest amount of yards and the 16 rushing touchdowns were just 17th best in the league. To make matters worse, from at least a fantasy perspective, the yards and TDs were divided three ways, between the two main backs, Zack Moss and Devin Singletary, and the dual-threat Josh Allen.

Looking at the stats below, if Moss played the entire year, the number of carries between him and Singletary would be darn near even. On the surface, it appears Singletary did more with his touches, averaging more yards per rush and more yards per reception. However, it is troubling that he only found paydirt twice.

While it’s valuable to look at the season as a whole, it doesn’t tell the entire story. Moss led the team in rushing from Weeks 14-16 while receiving 38 carries in those three games compared to just 25 for Singletary. Disregard Week 17 as backups played most of the second half. It makes sense, Moss was a rookie and it took him a while, especially with the injury, before he took over as the lead back.  Expect Zack Moss to be 1A this year while Singletary plays 1B.

The Answer: Moss is More Valuable but Both are Limited

Moss may be slightly ahead of Singletary coming into the season, but both guys are still going to get touches. The elephant in the room, which hinders the value of both running backs, is Josh Allen’s rushing abilities. Perhaps the Bills will attempt to run Allen less, after all, he’s the most valuable Bill since Jim Kelly, but that would only result in a small bump in touches for the RBs.

As far as ADP, most sites still have Singletary slightly above Moss. This is backward. I will be drafting Moss ahead of Devin Singletary.  Either way, both are probably RB3s and Flex plays at best.

People really jumped off the Tua Tagovailoa bandwagon in a hurry last year. Entering the season, a lot of fantasy experts were high on the rookie out of Alabama – and with good reason, he looked the part in college and could pick up those extra fantasy points with his rushing abilities. Well, playing QB in the NFL isn’t easy.

To the detriment of the Dolphins season, the organization kept insisting on playing Tua over Ryan Fitzpatrick while it was obvious that the latter gave the team the best chance to win. Tua’s completion percentage (64.1), yards per attempt (6.3), and QB rating (87.1) were all towards the bottom of the league. Overall, he just didn’t look the part.

To be fair, most rookie QBs struggle.  Peyton Manning had a QB rating of only 71.2 and 26 TDs with 28 INTs, for example. While I’m certainly not saying Tua will be a Hall of Famer, maybe this year is a good time to buy low.

The Answer: I’ll take a flyer on Tua

Tua is currently around the 22nd QB being taken in fantasy drafts.  At that low price, I’m buying. Tua should be a very solid backup fantasy QB this year with a higher ceiling than most other QB2s. He still offers the same running ability and the Dolphins are pretty well stocked at the skill positions. Not only did Miami draft Jaylen Waddle (Tua’s teammate at Bama) to join DeVante Parker, but they also signed Will Fuller.  Mike Gesicki is a solid TE and they drafted another one in Hunter Long, from Boston College. If Tua can improve his throwing abilities, this offense could take off.

Look, Tua’s stock last year was too high so I wasn’t buying. I didn’t have him rostered in any format. This year, you could argue his stock might be too low. I think he’s worth the investment as your backup in redraft leagues. In best ball, he’s even more attractive as your second fantasy football QB and might be the third or fourth option in the AFC East.

In 2020, the New England Patriots passing offense was atrocious, finishing 30th in yards and dead last in passing touchdowns. To compare this with past seasons, in 2018 and 2019 the Pats’ passing game was 8th best in the league and they were top five from 2015-2017.  It’s almost like Tom Brady was a pretty good QB in a sub-par AFC East for fantasy football and real-life purposes.

Last year, Cam Newton was the opposite. The veteran only threw 8 TDs to 10 INTs. His QB rating of 82.9 ranked 28th in the league. Looking at previous seasons, Cam’s QBR has only been above 90 once in the last five seasons and that was 94.2 in 2018 which ranked only 17th highest that year.  It should come as no surprise that Newton struggled last year and that the Pats used a first-round pick on Mac Jones.

It will be very interesting to see when Bill Belichick turns to Jones. It’s assumed that Newton will start the season under center, but this is new ground in New England. With Brady at the helm for so long, we’re not sure how quickly they will bring along the rookie first-rounder. Of course, pay attention to the preseason.  If the below continues, it could be sooner rather than later.

If the below is correct, I’ll go with the almost 75% chance Newton starts Week 1. However, it’s just a matter of time before he struggles and is benched. The Patriots play the Saints and Bucs (two strong defenses) at home in Weeks 3 and 4. If they lose two straight home games with Cam not playing well, we could see Mac Jones as early as Week 5 at Houston. That’s not a bad place to have a rookie get his first start.

As a whole, I guess the organization slightly improved the skill positions from a season ago. They lost Julian Edelman to retirement, but they signed Hunter Henry and Jonnu Smith at TE and brought in Nelson Agholor and Kendrick Bourne at WR. The two TEs can be a rookie QB’s best friends and the wideouts are at least serviceable. Agholor and Bourne will team up with Jakobi Meyers and N’Keal Harry but I’d say that’s still a below-average WR unit.

If my prediction is correct, Newton will have very limited fantasy relevance this season. You won’t find him on my teams. Right now his average ADP ranks him as the 27th QB off the board, but I like a handful of guys below him more.

Jones’s ADP puts him as the 34th drafted QB and I suppose there is some value there. Just don’t expect too much.  He’s still a rookie and will struggle on a mediocre offense when he gets onto the field.  I’m doing what New England can’t do, and I’m passing on basically the entire Patriots offense. The AFC East and fantasy football landscapes are too challenging to get excited about the New England offense.

Question: What Can We Expect From the Passing Game

Another horrendous passing game last year was found in New York, as the Jets actually managed to be worse (31st in Yards, 30th in TDs) than New England. Fear not Jets fans! Adam Gase is gone and no other team in the NFL went through as big of an offensive overhaul.  Even so, this doesn’t mean an immediate improvement is necessarily on the horizon.

New Head Coach, Robert Saleh, comes over from San Francisco where he was defensive coordinator the last four seasons. I like the hire and I think he’s got a chance to do well. Saleh will focus on improving the defense while giving control of the offense to the new offensive coordinator, Mike LaFleur.  LaFleur was also recently on the 49ers staff as the passing game coordinator last four years. He’s never been an OC so it’s hard to gauge how balanced the Jets offense will be.

In addition to the new coaching staff, Zach Wilson was taken with the 2nd pick in the 2021 draft and is expected to be the starting QB from Day 1. Jameson Crowder (Jets leading receiver from 2020) returns and he’ll be joined on the outside by free-agent pickups Corey Davis, Keelan Cole, and draft pick Elijah Moore. Chris Herndon is a solid option at TE and RBs Tevin Coleman (from SF) and Michael Carter (4th round draft pick) are new to the backfield. That’s a lot of new faces and how quickly they can gel will be interesting to watch.

The Answer: A struggle but with Improvement

Look, the Jets aren’t going to come out and be a top 10 offense this year. They have a rookie QB, below-average skill position players, and a dreadful offensive line (ranked 28th coming into the season). That’s not a recipe for success in the NFL. However, if Wilson doesn’t get killed this season, the kid has a future. Check his highlights from BYU. 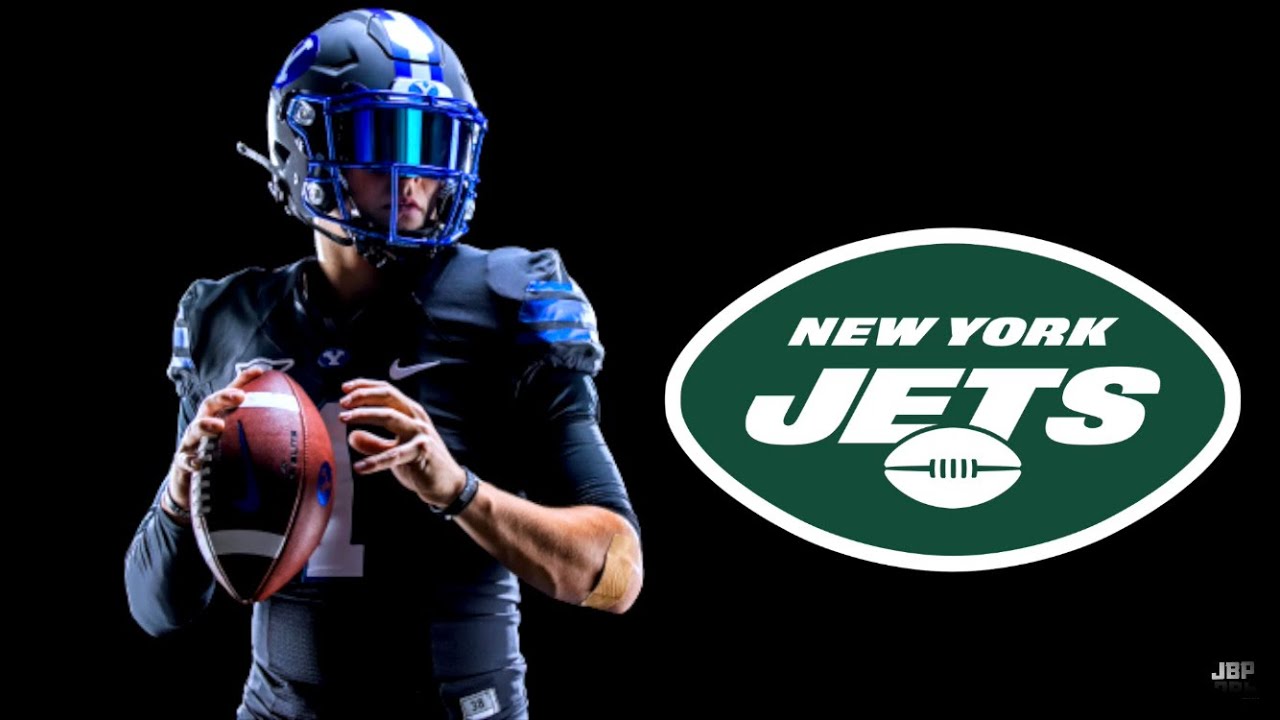 From a fantasy perspective, not one Jet can be looked at as a reliable producer.  Their value is slightly higher in best-ball format where you can ride the highs and lows more.  Plus, these guys are dirt cheap.  The defense isn’t very good so you know the team will be down and have to be aggressive on offense.

As far as Zach Wilson, his current ADP has 30 other QB’s being drafted ahead of him. If you play in a league with deep rosters, I love him as your QB3. If you play with a SuperFlex, he’s a nice option as your QB3 to fill in on bye weeks. But, let’s face it, in most leagues his value is limited and he’ll go undrafted. Brighter times ahead in the AFC East Jets fans, and I think it could carry over to fantasy football.