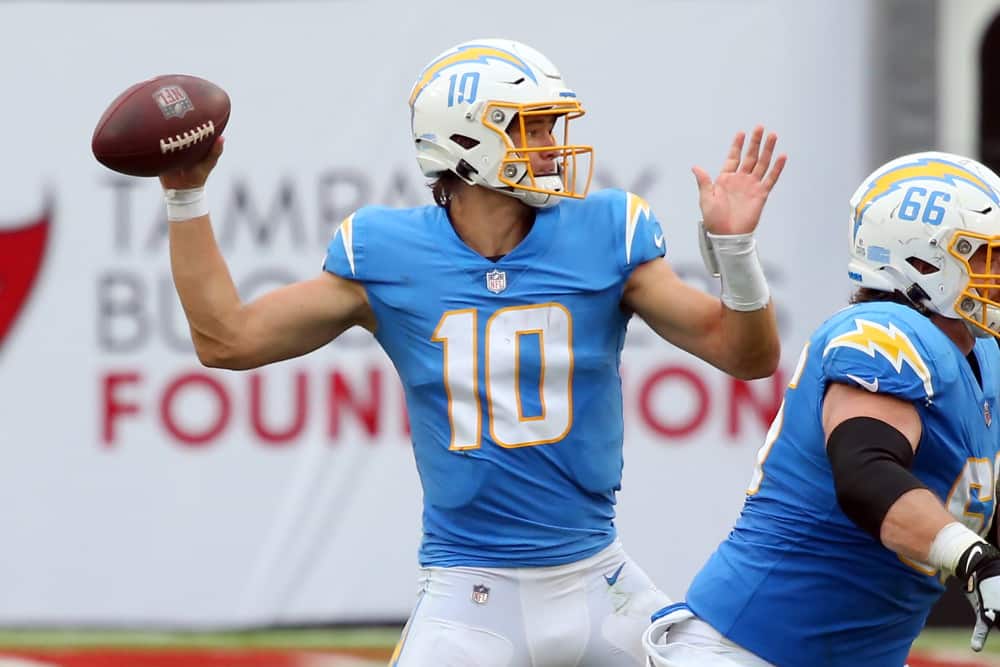 Last year, according to Fantasy Pros, the top five fantasy QBs were Josh Allen, Kyler Murray, Aaron Rodgers, Patrick Mahomes, and DeShaun Watson. It’s quite the accomplishment to break into the top five. Even the likes of Russell Wilson and Lamar Jackson had to settle for only top 10 finishes. Also finishing in the top 10 (9th), was the Chargers rookie QB, Justin Herbert.

What a terrific rookie season it was. Herbert got the starting nod in Week 2 and finished the season throwing for over 4,300 yards (6th highest) and 31 TDs (10th highest). He also chipped in with 234 rushing yards and five TDs on the ground. Maybe, more importantly, was that he passed the eye test and looked the part. The stage wasn’t too big.

Unfortunately, even with a terrific rookie season from their signal-caller, the Chargers struggled to a 7-9 season and fired HC Anthony Lynn. The new head coach is Brandon Staley who comes over from the Rams where he served as defensive coordinator in 2020. It will be interesting to see how quickly Herbert can learn a new offense and how that will translate into fantasy production. In an AFC West without any top-tier defenses, Herbert is a popular top-five quarterback pick.

The Answer:  Not Yet

While Staley is the HC, the new offensive coordinator, Joe Lombardi, could be more impactful to Herbert’s 2021 season. While Lombardi has spent the last five seasons as the QB coach for the Saints, he’s never been an OC before. Herbert has a lot of things going in his favor but a new offense and an unproven coordinator will be a challenge.

Regardless of the new coaching staff, the majority of the offensive roster is intact. Keenan Allen and Mike Williams are still at receiver and Austin Ekeler is still in the backfield. With a retooled offensive line, and with Herbert having a year under his belt, the offense should be just fine. With that said, Herbert isn’t top five material just yet.

As far as ADP, Herbert is currently being selected as the 7th QB off the board. I love him in that range. While other QBs may possess higher ceilings, Justin Herbert has a very safe floor and can be trusted for consistent production. Draft him and you’ll be happy.

Let’s establish one thing right away – I’m a JaVonte Williams believer. As a big ACC football fan, I watched him at UNC dominate the conference for the better part of the last two seasons. In his junior season, the running back put it all together, running for 1,140 yards and 19 TDs while racking up over 300 receiving yards with another 3 TDs.

His sophomore season wasn’t too shabby either, accumulating over 1,000 yards from scrimmage with 6 more TDs. Williams averaged over five yards per carry every season while hitting a 7.3 clip last year. He runs with a combination of power, speed, and elusiveness while possessing a great nose for the end zone. Even in his freshman season where he only got 43 carries, he still found pay dirt five times. 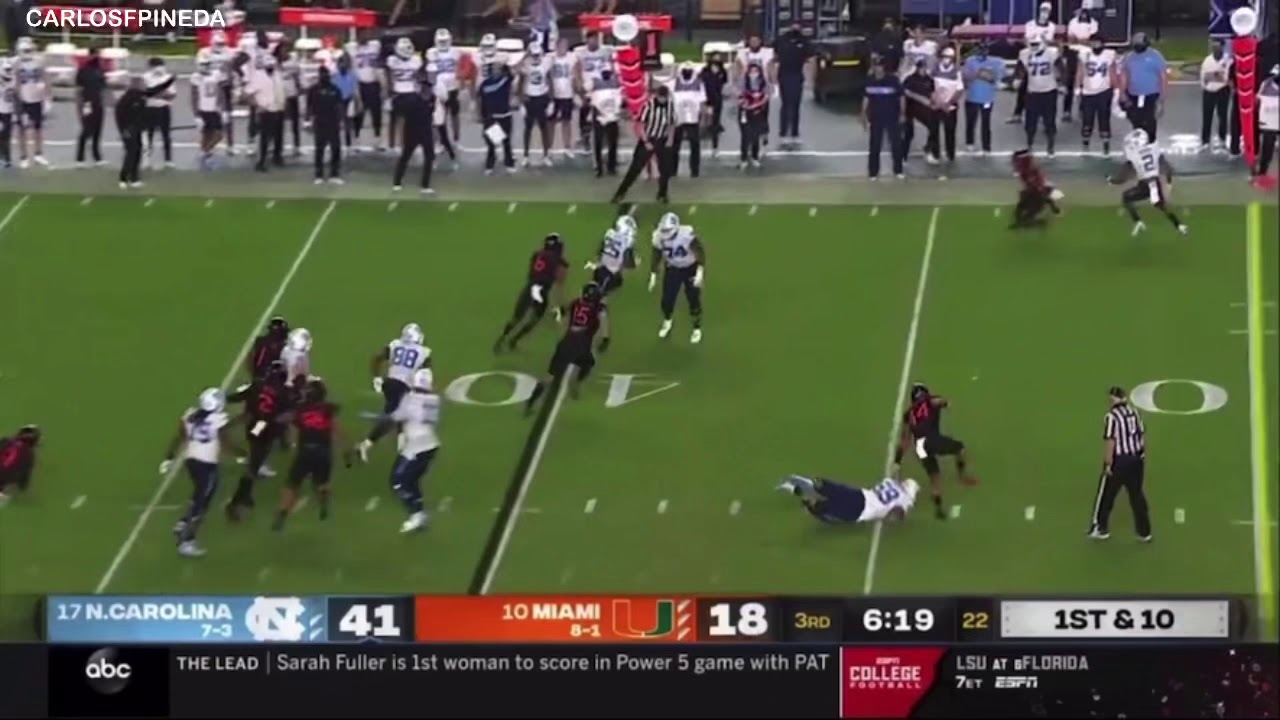 I understand – excellent college stats don’t always equate to NFL production. Additionally, the rookie isn’t being given the keys to the backfield on Day 1. Perhaps you have heard of the other RB in Denver, Melvin Gordon, arguably one of the best backs in the NFL over the last five seasons.

Gordon came onto the scene with the Chargers in 2015 and has run for more than 5,000 yards and 57 TDs in his six-year career. He found a resurgence with Denver last season, narrowly missing out on 1,000 yards with just starting 10 games. As the 2020 season went on Gordon separated himself from Phillip Lindsay (now with the Texans) and ended the season as an important fantasy contributor and solid RB2.

It’s going to be a timeshare this year. Right now, Williams has a slightly higher ADP (27th RB) compared to Gordon (29th). Solid arguments can be made for both running backs, but I prefer the rookie.

In 2020, the Broncos had the 13th best rushing offense in the NFL with just the 28th best passing offense. Their top WR, Courtland Sutton, is back from injury and the QB play can’t get much worse than a season ago. If the passing attack can just be average, the running game could be even better this season which means greater fantasy opportunities for Williams and Gordon.

The argument against Gordon hinges on the fact that he is now at the ripe old age of 28 which is getting pretty long in the tooth for an RB. Plus, in his six years in the league, he’s only been able to play a full season once. He’s old and he’s injury-prone.

I realize that Gordon is in a contract year and there’s a high likelihood that he won’t be in Denver 2022. Hypothetically, that means Denver can run him into the ground and not be concerned about preserving the running back for future seasons. While logical, I don’t see that happening. They didn’t draft JaVonte Williams with the 3rd pick in the 2nd round to put him on ice until 2022.

Here’s what will happen: Gordon will be the starter to open the season and will serve as a great mentor to the rookie RB who will take over the lead role as the season progresses. For the first half of the year, the touches could be ⅔-Gordon to ⅓-Williams but this will be flipped by the season’s end. Williams is the future of the Broncos backfield and is the Denver RB to own. The AFC West has produced strong backs before and Williams could be the latest fantasy football star.

Question: What can we expect from the Raiders WRs?

First off, even though Darren Waller is the top target in Las Vegas, I have not included him in this question. We know what to expect from the TE. Another year with 100+ catches and 1,000+ yards should be in the cards. Lock him in as a top-five tight end with a chance to be second best behind Kelce.

As far as the WRs, the slot guy Hunter Renfrow led all wideouts in catches last year, and he’s back. Out wide, the top Raider receiver was Nelson Agholor who is now with the Patriots. Henry Ruggs III is back and looking to build off an underwhelming rookie season where he only caught 26 balls for 452 yards and 2 TDs.

Either John Brown or Bryan Edwards is expected to start opposite of Ruggs while Zay Jones and Willie Snead should serve in a reserve capacity. That’s a lot of mouths even if the passing attack was better than expected in 2020, finishing 7th best in the NFL.

Renfrow and Ruggs have clear roles in this offense. Renfrow is your underneath, safety-valve, slot guy and Ruggs will be the deep threat. There’s more uncertainty surrounding the other guys.

Willie Snead is entering his seventh season but hasn’t accumulated more than 500 yards since 2018. He found success early in his career as a 2nd or 3rd option in the Saints passing game but couldn’t replicate it in Baltimore’s run-heavy offense. It’s hard to see much fantasy value for Snead this season and beyond.

After a couple of 1,000-yard seasons in Arizona and Buffalo, John Brown was injured the majority of the 2020 season and the Bills decided not to retain the veteran. While Brown has had a productive career, he’s almost a carbon copy of Henry Ruggs. Both guys are 5’11 speedsters capable of roasting DBs on deep routes. If your three wideouts are Brown, Ruggs, and Renfrow you probably have the shortest trio in the league.

Meanwhile, second-year man Bryan Edwards is 6’3 and at least 10 pounds heavier than Brown. All things equal, it would seem like Edwards is a better compliment to Ruggs. However, in his rookie season, Edwards just caught 11 balls for 190 yards and 1 TD. Is the South Carolina Gamecock ready to step up and be a starter? Be sure to monitor his progression through the preseason.

At this point, Brown is the safer bet for production, and with an ADP as the 66th WR off the board, he’s certainly worth a flyer. It’s my belief that Vegas would love to see Edwards make a second-year leap and earn a starting spot. It might be a reach at this point, but as the 81st WR being taken, he’s a super sleeper that might pan out.

As far as Ruggs and his 50th ADP, I’ll pass. In this same range, I prefer players like Mike Williams, DeVante Parker, and Michael Gallup. Ruggs has a higher ceiling, and he might be more attractive in a best ball format, but the fact the organization brought in Brown and Snead is concerning. Ruggs has a lot to prove this season. Even against a less-than-stellar AFC West schedule, the Raiders’ receivers aren’t great fantasy football options.

Will Henry Ruggs break out in Year 2? pic.twitter.com/T92rGJlypT

Question: What Wide Receivers Not Named Tyreek Hill Should Be Owned?

The Chiefs WR2 last year, Sammy Watkins, has left KC after three underwhelming seasons. His departure opens up more opportunities for the other receivers on the roster. Most specifically, that means Mecole Hardman and/or Demarcus Robinson.

Behind Kelce and Tyreek Hill, the third-leading receiver on the Chiefs last year was Demarcus Robinson with 45 catches. Not far behind was Hardman with 41 receptions and Watkins with 37. While Robinson caught more balls, Hardman was actually targeted more often. Additionally, he totaled almost 100 more yards and one more TD than his fellow WR.

The takeaway is fairly easy, Hardman is more of the home-run-hitter while Robinson runs a lot of shorter routes. Robinson actually had the worst Yards Per Catch of any KC WR last year at just 10.4. The end result saw Hardman finishing as the 57th receiver in fantasy last year with Robinson only finishing 78th.

At this point in Demarcus Robinson’s career, we shouldn’t expect much of an increase in production. He’s a solid reserve WR who fills a minor, underneath role in Kansas City. Just because there’s an opening of opportunity, don’t expect him to jump through the door.

On the other hand, Mecole Hardman is entering just his third season after putting up back-to-back 500+ yard campaigns. It might just be Year 3 where Hardman emerges and becomes a consistent fantasy contributor. If he can absorb just ⅔ of Watkins’s production, we’d be looking at a stat line of about 66 catches for 840 yards and 5 TDs. That’s basically what Chris Godwin did in 2020.

I realize that drafting the WR2 on the Chiefs is a bit of a gamble. However, Hardman is worth the roll of the dice. Especially with an overall ADP of 150. That’s a 12th round draft pick in a 12 team league. I challenge you to find another 12th rounder with Hardman’s upside. It’s about time for a breakout year for Mecole Hardman!