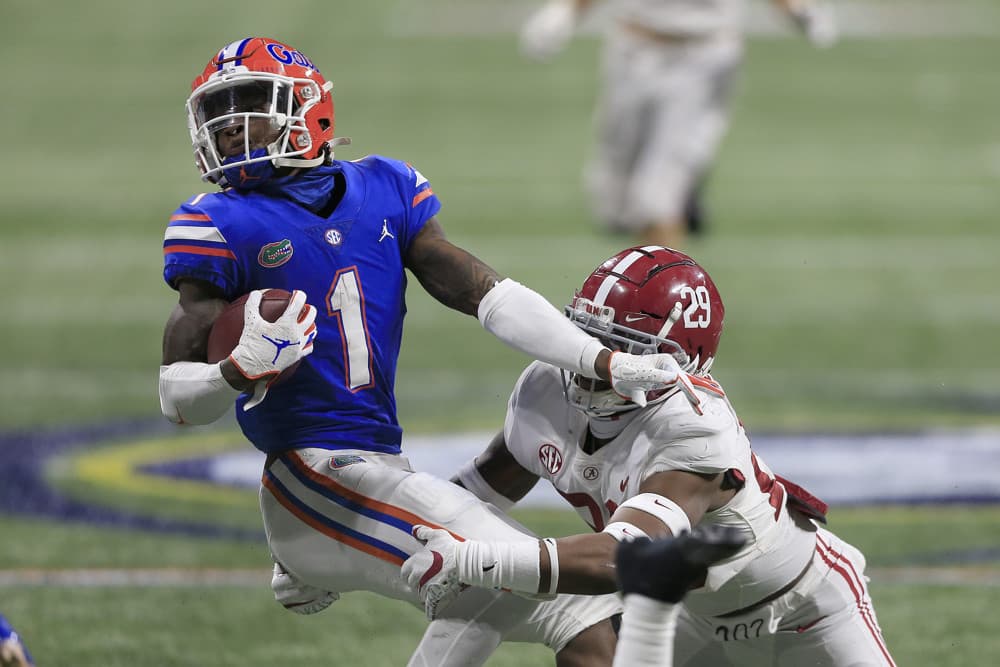 Rookies can pose as some of the biggest risks in fantasy football. There is no sample size of their gifts on the NFL level. And while all of them are tremendously talented, that does not always translate to pro-level football. Let’s look at some popular rookie draft picks and the possible red flags that are associated with them.

Wow, Terrell. Are you really going to kick off a “red flags” article with the consensus rookie draft 1.01 for this offseason?

Absolutely! Not because I’m not a believer in Najee Harris, however, I may be considering some other guys at the 1.01 rather than Harris. My main concern with Harris is the Steelers’ offensive line.

This is a unit that was ranked 31st in run-blocking, per Pro Football Focus, and the highest-graded run-blocker in Alejandro Villanueva is no longer with the team. The Steelers ranked last in rushing yards per game (82.9) and rushing yards per attempt (3.6).

In 2021, they will welcome at least three new starters up front as they will completely reshape that offensive line. While it is tough for them to be as terribly bad in the run game as they were in 2020, I do not see them making a huge leap to instill major confidence in the run game moving forward.

There is no doubt in my mind that Harris will be a good back in this league, however, I think I like players like Ja’Marr Chase, Kyle Pitts, or Trevor Lawrence (in Superflex leagues) for that 1.01 rookie draft pick.

So sad that a New York Giant has to make my “red flag” list but there may not be a bigger red flag in the group of NFL first-round picks than that of Kadarius Toney. The unfortunate part of that is that none of it is about his talent. Toney is an extremely talented receiver that will be really good for the Giants in real life, but not as much for fantasy managers.

The Giants offensive has so many weapons in front of Toney, he will 100% be competing for touches in that offense for years to come. Saquon Barkley, Sterling Shepard, and Darius Slayton are not foreseen to be going anywhere, anytime soon. Also, the Giants just added wide receivers Kenny Golladay and John Ross, along with tight end Kyle Rudolph to the offense as well. Not to mention the Giants still have Evan Engram tied to the organization for one more year.

Toney will be a great gadget guy for the Giants and will definitely be explosive in the yards after catch category. He profiles as a Percy Harvin-type asset to an offense but that might not be the best thing for fantasy.

The Giants select Gators WR Kadarius Toney with the No. 20 pick in the #NFLDraft 😤 pic.twitter.com/VXQND9TAlL

Bill Belichick displayed the perfect waiting game as Mac Jones fell right into his lap. Jones profiles as a great NFL-style quarterback however, he was only a one-year starter in college. Concerning because previous one year starting quarterbacks in college that were selected in the first-round quarterbacks were Mark Sanchez, Cam Newton, Mitchell Trubisky, Kyler Murray, and Dwayne Haskins.

Newton and Murray are guys to get behind. However, Jones offers nowhere near the production that these QBs did with their legs. The rest of the list are not quarterbacks to be proud of. Outside of Murray and Newton, the other three quarterbacks combine for two top 15 seasons since 2009.

Not to mention, Jones will have a downgrade in talent around him compared to his college days at Alabama. Jonnu Smith and Hunter Henry are great additions to this offense, however, the receiving core will still need work as they are led by newcomer Nelson Agholor and third-year receiver Jakobi Meyers.

Whenever Jones makes his evitable move as the starting quarterback in New England, he is more likely to be a streaming quarterback rather than a week in and week out starter.

Rashod Bateman might have been one of the best receivers in this draft to fit the Raven’s need at receiver. He is a big six-foot receiver that has an amazing catch radius. He is the extra target that the Ravens were looking for to give Lamar Jackson on the outside.

However, this does not take away from the fact that the Ravens have ranked bottom five in passing yards per game the past two seasons that Jackson has been the starting quarterback. This is a run-happy team that does not look to switch anything up as long as Greg Roman is still in town.

While Jackson is still and capable passing quarterback and Bateman is a more than a capable receiver, this offensive passing game may not be enough to support a top wide receiver. Bateman should offer decent flex appeal most weeks, but I do not expect huge returns until a change in philosophy in Baltimore’s offense.

Full disclosure, Amari Rodgers is a stud and one of the better picks made in the third round of the NFL draft. I have no doubt that he can quickly rise to the second or third passing option in this offense. This rookie’s red flags has absolutely nothing to do with him and everything to do with the question marks under center for the Green Bay Packers.

If Aaron Rodgers recants and plays this season (and future seasons) for the Green Bay Packers, then I fully take back everything I am about to say about Amari Rodgers’ fantasy outlook.

However, if Aaron Rodgers does not play another snap for the Green Bay Packers, then Jordan Love is in line as the signal-caller. And if that happens then there should be a legitimate concern for the opportunity that Amari Rodgers will get.

Love was highly touted as an NFL prospect and I for one was higher than most on him coming out of Utah State. However, Love could not beat out Tim Boyle for the backup job! In fact, Love was not active for a single game in the 2020 season. Although he did not get a full offseason due to COVID-19, he was still unable to surpass Boyle for the backup position over the course of the season.

This puts a small seed of doubt into the second-year quarterback’s ability and I am not sure what a Green Bay Packer’s offense will look like without Aaron Rodgers at the helm. Love could ball out and prove why he is a first-round pick, or he could prove that him not being active all of 2020 was a bigger story than we might realize.

D’Wayne Eskridge is a name that is generating some buzz for the 2021 season and beyond. The Seahawks’ second-round pick is an excellent route runner that has 4.4 speed. He should have zero problems taking over as the third receiver in the Seahawks’ offense.

The concern for him is the fact that since 2016, the Seahawks have not supported a third receiver inside the top 80 of fantasy. With D.K. Metcalf and Tyler Lockett as the receivers of today and tomorrow for Seattle, Eskridge may have some nice games as a WR3 in that offense. He also will have a lot of games where he just can not produce relevant fantasy numbers.

Eskridge has the talent, but his opportunity in how the Seahawks use him may be limited. He could have a lot of appeal in deeper fantasy leagues, but he is not an option that I’m counting on to make weekly flex appeal in his upcoming seasons in the NFL.

The Seahawks get Russ another weapon in Western Michigan WR D'Wayne Eskridge with the No. 56 pick in the #NFLDraft pic.twitter.com/lXHOZlhBbH

Kenneth Gainwell shocked a lot of industry professionals as he slid all the way to day three of the NFL draft. Considered to be one of the draft day steals, Gainwell has huge popularity earlier among the fantasy community. The slide was not without merit and lead to even more red flags for this taleneted rookie.

He will have to overcome incumbents Miles Sanders and Boston Scott. They are sticking around and will have a role in this offense which will cut into Gainwell’s potential workload. Gainwell’s Austin Ekeler-like game could make him one day very relevant to fantasy, however, I need to see some of the other backs get out his way.

This is still a Philadelphia Eagles team that, for the time being, still has Jordan Howard and Kerryon Johnson on its roster. While I like Gainwell’s chances against the likes of those two, I am afraid of how many opportunities he will get to shine with Sanders and Scott dominating the work. Additionally, Jalen Hurts will get rushing work as well which is sure to limit the times we see Gainwell get meaningful touches.