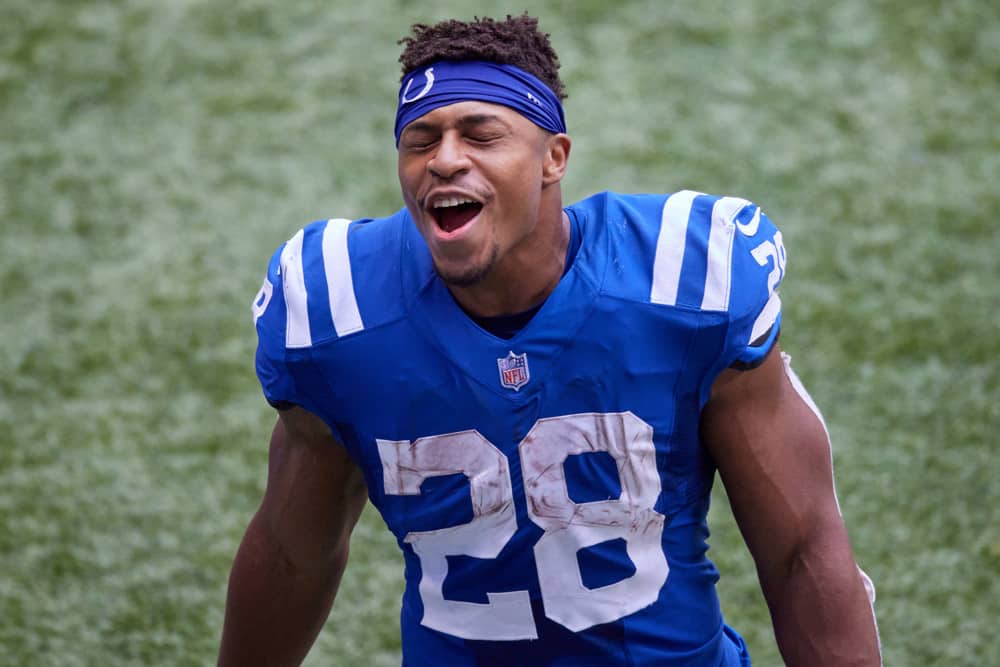 Everyone who has played fantasy football before knows that it can come with some highs and lows. From the feeling of nailing a sleeper to seeing your first-round pick being among the fantasy football busts in Week 2, it can be a grueling season. Injuries cannot be predicted or avoided. However, there are some players this season who are either primed for a downtick on their stat line or perhaps just being drafted way too high. Here are 10 players to avoid this fantasy football season.

A lot of people may think I’m crazy for this one but it is not in any way a knock on Derrick Henry as much as a preference towards Kamara this year. A lot has changed for both guys. However, I think it tends to favor Kamara at the number three overall pick if it comes down to it. An improved passing attack for the Titans may cause them to try to lighten Henry’s league-leading 376 carry count from last year. And for Kamara, a little bit of uncertainty for the Saints at the QB position may work in his favor as they try to lead on their superstar halfback in the absence of Michael Thomas. This by no means is saying you shouldn’t draft Henry if he’s on the board at four, I just think Kamara will outperform him this season and is the better pick at third overall in your draft if things shake out that way.

While I am not predicting that Jonathan Taylor will be an absolute bust, the first round is way too high for him in PPR leagues. Last season Taylor put up 1,169 yards and ran for 11 touchdowns in 15 games. While these numbers are impressive his usage in the passing game is a bit concerning, he only caught 36 passes last season and was overshadowed by teammate Nyheim Hines in the passing game who caught 63 passes. In addition to Hines, the return of Marlon Mack should additionally lighten Taylor’s workload mostly on the ground as he was a 1,000-yard rusher in 2019.

An additional concern I have with Taylor is the injury to All-Pro guard Quenton Nelson, who is nursing a broken foot. While he is targeting a week one return his original timetable was 5-12 weeks. This would have put him back Week 3 at the soonest. If Nelson misses time this season it could hurt Taylor’s value in fantasy for a few weeks. Taylor is on the list of players and potential fantasy busts to avoid this year.

Like many others, I’m not too high on the 3rd year halfback out of Alabama. He came in at running back eight last year which was outstanding for those who had him on their squad but I just don’t see him repeating that against this year. My lower expectations for Jacobs clearly don’t come from a lack of talent. Rather from an expectation of fewer touches and a much weaker offensive line. I think we see a dip in carries for Josh Jacobs as the Raiders signed fellow former Alabama HB Kenyan Drake this offseason likely to lighten what was a heavy load for Jacobs last season with 273 carries (3rd among all running backs). Additionally, as I mentioned before the Raiders OL got significantly weaker this year with the departures of OT Trent Brown, C Rodney Hudson, and OG Gabe Jackson. With all things considered Jacobs should still have a pretty solid year. However, I don’t think he lives up to an ADP of 29.

Dak Prescott is coming into this season off of a horrific ankle injury that ended his season in week 5 last year. Since then he has been one of the biggest stories around the league. And now add in concerns over a strained shoulder on top of those wondering how his ankle will hold up.

Dak Prescott may not be "fully back" all season as he deals with last year's ankle injury and his recent shoulder strain, per @AdamSchefter

While the concerns raised by Adam Schefter did not come from an official source, so likely come from a bit of speculation; I think one would be wrong to immediately write them off given his reputation in the field. Overall I personally am just not high on the idea of taking a quarterback early, especially one with limited rushing potential, 20 YPG over 5 seasons, and the potential to either miss time or not be at 100% for some of the season. No one ever thinks a guy will be among the busts at the start of the fantasy football season. Dak could be a huge letdown this year and high among fantasy players to avoid.

The red flags for Michael Thomas are clear. He’s still rehabbing an ankle injury which he sustained last season and he is currently unhappy in New Orleans per reports. While many speculate Thomas’ return will potentially occur between weeks three and eight, the fact that he has a damaged relationship with the organization leaves room to question whether he’ll rush his return. Thomas now has either Jameis Winston or Taysom Hill throwing him the football. Both are a downgrade from first-ballot Hall of Famer Drew Brees. All of this uncertainty surround Thomas makes him just too risky a pick for where he’s being drafted. Consider him a guy with a low floor and a potentially high ceiling if things shake out perfectly. Thomas could be one of the biggest fantasy football busts this year.

I’ll be one of the first to admit that Deebo Samuel is one of the most exciting players in the NFL. He’s an absolute freak with the ball in his hands and that allows him to get a lot of yards after catch (12.9 per reception last year). However, from a fantasy perspective that might just be my biggest concern. He mostly gets the ball right off the line of scrimmage, making him extremely unpredictable in terms of output. Additionally, he may be the 3rd option in the passing game (behind Aiyuk and Kittle). On a run-first team with shaky QB play lands Samuel among the fantasy players to avoid. With an ADP of 87, I think there’s a lot of other guys you can get with a much higher floor.

Last season Tonyan caught 11 touchdown passes on 52 receptions. While impressive, repeating a season in which less than one out of almost every five catches is a touchdown is just unattainable. Furthermore, Robert Tonyan wasn’t really getting that many targets last year, he was outside of the top 20 with only 59 and 3.7 per game. For an extremely touchdown-dependent player, an ADP of 100 is just way too high. Especially considering he may now be a 3rd option in the passing game. Especially with Rodgers reuniting with his old pal Randall Cobb. I think there is a lot more value elsewhere at the TE position.

David Johnson is five years removed from his 2016 season in which he had scored 20 touchdowns. Since then a lot has changed and Johnson just doesn’t have the same ability he did back then. Most recently, in his last two seasons, he has rushed for eight touchdowns and missed seven games. This season once again brings up some causes for concern as he’s playing in one of the most crowded backfields in the NFL with Mark Ingram II, Phillip Lindsay, and Rex Burkhead. Furthermore, on the Texans’ current depth chart, Lindsay and Ingram are both listed ahead of Johnson. While things could change, this likely indicates a rather equal share amongst the three with Burkhead also seeing some touches. Relying on Johnson to capitalize on what could be a limited workload is definitely a gamble. In a crowded backfield, it feels like a recipe for Johnson to land among the busts and fantasy football players to avoid in 2021.

Devin Singletary enters his 3rd season for the Bills. This year in what looks like a running back by committee in Buffalo. Yet the committee isn’t necessarily what is making me so low on Singletary, it’s the Bills. Last season the Bills had the second-best passing offense in the league and the 23rd best rushing offense. They are a pass-first team and Singletary saw himself end out outside the top 15 in receptions, averaging 2.4 per game. On top of that, you can’t expect Singletary to get a ton of opportunities at the goal line as those duties normally go to QB Josh Allen, who rushed for more touchdowns (eight) than Singletary’s two last year.

Hunter Henry signed a 3yr/$37.5 Million contract this offseason making many think he would be the guy to fill the vacant shoes after Rob Gronkowski‘s departure from New England in 2019. Well, that may have been the goal but the signing of Jonnu Smith three days after Henry certainly hurts Henry’s value. While I understand that the Patriots have made the two tight end scheme work, that was with Tom Brady and this is with Cam Newton or Mac Jones. Furthermore, Jonnu Smith will be serving as the TE1 for the foreseeable future with Henry expected to miss multiple weeks with a shoulder injury. Overall I just don’t think Henry is worth a start. Or even a draft pick in any league size 12 teams or below.