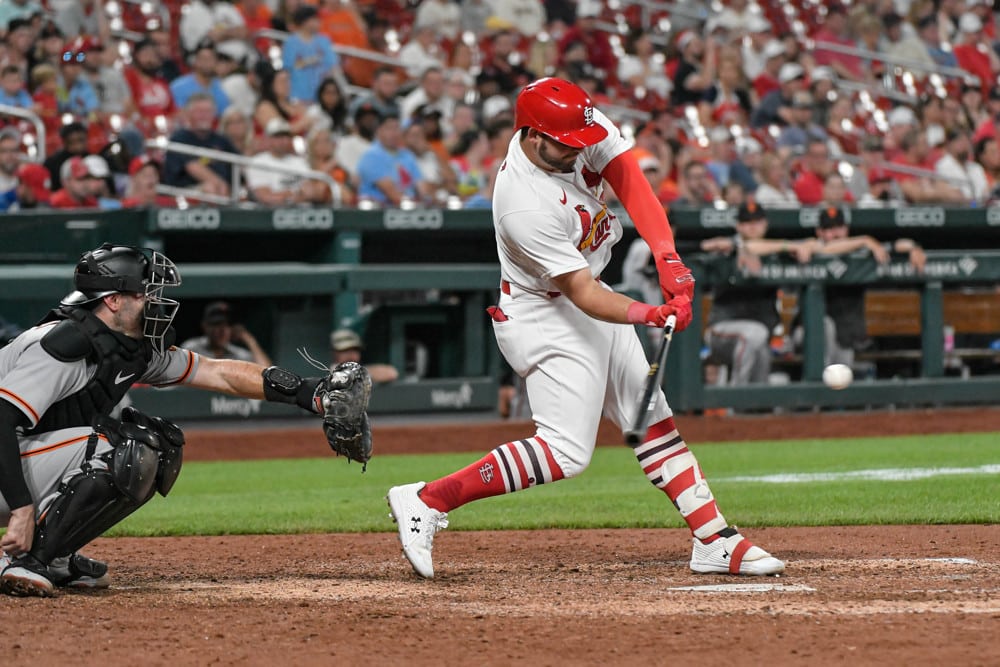 In 2022, much of the rookie focus has been on the highly touted guys like Julio Rodriguez, Bobby Witt Jr, and Spencer Torkelson. This list is meant to spotlight other relevant fantasy baseball rookies who may be overlooked.

Nobody can deny the allure of the hyped-up fantasy baseball rookies. With all the hype oftentimes comes missed expectations. One very effective fantasy baseball strategy is to target rookies that quite often go overlooked or fly under the radar. There’s been a handful this year worthy of at least being on your radar.

Thomas may be freshly called up but he’s already a relevant fantasy baseball commodity. While he was a top prospect in his own right (#24 overall according to fangraphs), his hot start has gotten little attention. Through 13 games, Thomas has the three home runs and five RBI to go along with four doubles and an impressive 177 WRC+.

Dig a little deeper and he’s been even more impressive. Taking the small sample size into account, Thomas actually has a solid barrel rate at 9.1% and 39.4% hard-hit rate. Both of which are well above league average. He does have a less exciting 86.9 MPH average exit velocity. That is overcome by his ability to hit the ball to all fields (37.9% pull rate, 34.5% opposite field) and his excellent speed (94th percentile). Plus he absolutely annihilates breaking pitches (.538 average, 1.077 SLG in 13 AB). Again, small sample size but still a very positive sign for a young hitter.

As long as Thomas is still in the big leagues, he’s proven to be more than worthy of a roster spot. 12 team or larger leagues should scoop him up ASAP.

Much of Donovan’s continued success and ability to stay on this list comes from how much playing time he will continue to get now that Gorman has been called up. Thankfully for Donovan, though, he’s performed more than well enough in the playing time he’s gotten.

Rookie Brendan Donovan has been raking for the Cardinals. And he's hot pic.twitter.com/uXys4eYOW8

What you get with Donovan isn’t someone who is going to blow you away with power numbers. What he excels at is getting on base and hitting for average. In his 108 minor league games in 2021, Donovan put up 21 doubles, 12 home runs, 66 RBI and stole 19 bases. He did all of that while hitting .304 and getting on base at a .368 clip. This is the kind of production Donovan has carried over to the MLB level. He’s got a 20.4% walk rate which has led to an excellent .463 OBP. He also has a below-league average chase rate at 25% and is making a very impressive 86% zone contact.

Donovan’s average exit velocity (85 MPH) and barrel rate (3.2%) do leave much to be desired. Despite that, he still has an above league average 38.7 hard hit rate. So that’s something. Softer contact aside, he seems to do all the things needed to still be effective. He’s limiting his fly balls (16.1%) and has a solid line drive rate (25.8%). Donovan makes use of all fields as well, pulling the ball only 32.3% of the time.

With Tyler O’Neill on the IL, there still seems to be a clear path to playing time for Donovan. He has already played five positions this year and profiles as an excellent utility guy moving forward. As long as he’s in the lineup he makes for a decent fantasy addition in deeper leagues. Especially points leagues.

One of the weird rookies that’s somehow in his third major league season, Neuse seems to have finally stuck on the major league roster. Not only that, he’s made himself one of the more promising fantasy baseball rookies as well. Even though he hasn’t flashed much power yet, his minor league power numbers give a lot to be excited about. 13 doubles and 13 home runs in the 2021 Triple-A season and 31 doubles, 27 home runs in the 2019 season. Even if he can somehow land somewhere between those two numbers he’d be a must roster in every format.

2022 has been Neuse’s biggest sample size in the majors and it’s come with some positive returns. Firstly, Neuse has the lowest strikeout rate of his career at the major league level (27.5%) as well as his highest walk rate (7%). This has led to the highest OBP (.324) and OPS (.685) of his career. He’s not barreling up the ball as much as I’d like to see (3.3%) but he’s still making hard contact. His average exit velocity (90.4 MPH) and hard-hit rate (41.8%) are both above league average.

One of Neuse’s biggest improvements this season has been his ability to hit the fastball. In 2021, Neuse only hit .182 off fastballs. This season, Neuse is hitting a solid .293 off of them. He’s also hitting a career-best .212 against breaking pitches. While .212 isn’t usually something to get excited about, when a player such as Neuse shows such consistent hitting improvement across the board it’s an excellent indicator of continued success. With three doubles, two triples, two home runs, and four stolen bases already this season expect Neuse to be a viable multi-category contributor in fantasy for the rest of the season.

One of the things that makes Yepez more appealing right out the gate is that he’s soon to get outfield eligibility as well. Pair that with the fact that he absolutely lit up pitching at the Triple-A level the last two seasons before this year’s call up and you have the makings of a player with immense potential. In his last 114 minor league games, Yepez hit .287 with 30 doubles, 31 home runs and 89 RBI. Pretty damn impressive for less than a full season’s worth of ABs.

The thing with Yepez is that he’s quite the free swinger. It’s going to either end up being his blessing or his curse. He chases a well above league average 37.5% of pitches. Despite that, he makes a better-than-league average 60.4% contact on those pitches he’s chasing. He also swings at 71.4% of pitches in the zone and swings at 54.2% of pitches he sees in general (47% league average). What’s good, though, is that he makes an excellent 84.1% contact on pitches in the zone and only whiffs 24.3% of the time.

The upside is there. With him getting even somewhat consistent playing time in the loaded Cardinals lineup, he’s been fantasy relevant since day one. With his 8.3% barrel rate and 90.5 MPH average exit velocity he’s doing a good job of making solid contact. His 16.7% line drive rate could use a bump but his 15.7 degree launch angle indicates that will come with time. Look for him to continue putting up counting stats as the season moves on batting in the heart of that Cardinals lineup. With men on base, Yepez is batting .292 and I don’t see that slowing down any time soon.

Yepez should be on every fantasy radar. Post-All-Star break, when he’s really gotten some major league time in, could be monstrous.