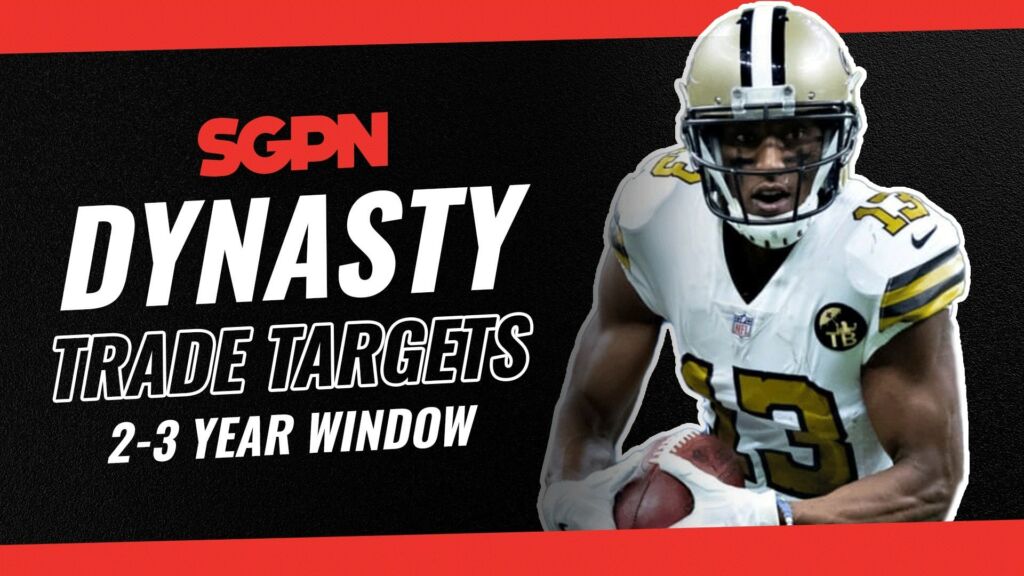 When you are looking for dynasty trade targets, you do not always have the budget to go big game hunting. Everyone wants those young and sexy dynasty pieces. I encourage you to get as many of them as you can, but let’s be honest, they are not always for sale.

Also, if they are for sale, you are having to give up crucial draft capital. When looking for veteran targets, you can always try to go for the 1-year rental route. Those players are typically cheaper and always easier to attend. No issues with this route, but I would always encourage everyone to look more at a 2-3 year window. Giving up draft picks for players that will be out of the league next year is not what I recommend. Let’s talk about some players that can give you 2-3 solid years of production starting this year!

Trade Tip: There are only so many teams in your league that is selling. There are so many teams that are selling the pieces that you want. You are competing against every other team for those players, do not wait. Do not wait around and let your opponents beat you to the players you want. Be first in line and go get that deal done. Go to your league, and take an inventory of who is selling. Look at your team and see what you need, go shopping. Go win the championship.

Don’t forget to check out our Dynasty Trade Value Chart

Reports in camp are that Michael Thomas looks great, and this team could compete in a watered-down NFC. It has been two years since we have seen Jameis Winston play a full season. The last time he played a full season, he was a top 5 fantasy football quarterback. Last year Jameis Winston played six full games before going down with a torn ACL. In those six games, he had thrown for 14 touchdowns and three interceptions.

That is a pace of 39.67 touchdowns and 8.5 interceptions. Yet, he is still being drafted in both dynasty and redraft way outside of the top 12. Winston can be had for a late
2nd in Superflex leagues, for peanuts in standard.

Ryan Tannehill has been a QB1 in each of the last two seasons. Tannehill had a crappy playoff game and everyone is ready to move on. The team then used a third-round draft pick on a quarterback and his dynasty value plummeted. Losing AJ Brown did not help the situation and I get the concerns. Tannehill finished as a QB1 last year even without AJ Brown, Derrick Henry, and Julio Jones for multiple games.

The team has brought in an entirely new set of pass catchers. At tight end, they brought in veteran Austin Hooper, who has been one of Tannehill’s favorite targets so far in camp. They drafted Treylon Burks in the 1 st round as well as slot-WR Kyle Phillips who has been breaking ankles at camp.

Matthew Stafford and Kirk Cousins are tremendous picks here. They are a little bit more expensive, but if you can get them please do. I wanted to give you some different options, deeper options.

Stafford and Cousins are ranked higher for a reason; they will also cost more. I still would prefer those two players if you can afford or get the deal done.

Aaron Jones is on a team without a clear-cut #1 wide receiver and most will tell you that it likely is Aaron Jones. We all know that A.J. Dillon is going to cut into his work, but these guys can co-exist. Jones is a great pass catcher and has shown the ability to be very efficient in the past.

He is the closest thing to Alvin Kamara, and he doesn’t need 30 touches to win you the week. This offense will be different this year without Davante Adams. There are over 200 vacant targets in this offense; expect Aaron Jones to be one of the primary beneficiaries.

I think there are two more years of RB1 production out of Jones, and you can take advantage of those who are ready to move on. Jones will still probably cost you a late 1 st or an early 2nd plus more. I would try to get him for two 2nds if I can, go from there. 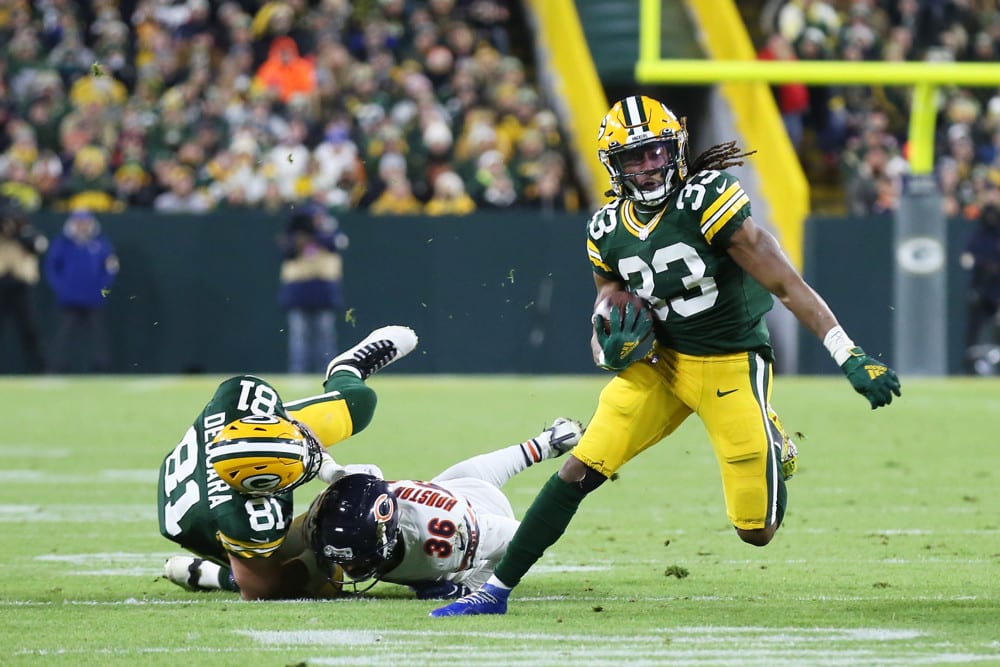 GREEN BAY, WI – DECEMBER 12: Green Bay Packers running back Aaron Jones (33) breaks thru a hole during a game between the Green Bay Packers and the Chicago Bears at Lambeau Field on December 12, 2021 in Green Bay, WI. (Photo by Larry Radloff/Icon Sportswire)

Kareem Hunt has made some headlines with his hold and trade request. Hunt has been back to playing, and his request has been denied. If he stays with the Browns, we have seen what he can do. When Hunt and Chubb are both healthy, Hunt is still a player you can flex weekly in all PPR formats.

Hunt averaged 14 touches a game last year when Chubb was healthy. That is around 250 touches. Hunt is a player that could be traded at some point this season as this might be a lost season for Cleveland.

Hunt could see his stock go up if he were to be traded to one of the top offenses. Go get him now. An early-mid 2nd should be able to get Hunt. I would not pay anymore, and I would try to get him for a late 2nd if I can.

Rashaad Penny and Ezekiel Elliot are both polarizing players. You should just need to hope that the person selling is on your side. Some people will just be glad to get rid of them before it is too late. Check-in to see what the prices are.

Brandin Cooks is an enticing trade option. What if Davis Mills is actually good? I think he might be. All of the other rookie quarterbacks got a million excuses for sucking last year. Urban Meyer took the trophy for worst Head Coach, but as far as supporting cast, that goes to Houston.

This was a team in turmoil with the Deshaun Watson drama, as well as they were just depleted of talent. This was a very bad team that was expected to win 0 games. Davis Mills exceeded expectations and would 100% have been a top pick in the 2022 draft class. It is the same thing every year with Brandin Cooks, no matter the team or situation.

Cooks is as consistent as it comes, and his picture should be in the dictionary next to undervalued. Let everyone else disrespect this man, and go get him on your roster. Cooks just signed an extension and should be Houston’s #1 for the next two seasons. Follow the volume and go get Cooks. An early-mid 2nd should be able to get Cooks. Might have to add a little more, but I am not paying a 1st.

Michael Thomas’ buying window may have closed, but it doesn’t mean you shouldn’t check-in. It has been a long time since we have seen him play, and the concerns are absolutely valid. But, the upside is undeniable. The last time we saw Thomas playing, he was the best WR in fantasy football and in football.

Thomas has some company now, so we may see some of the volumes go down. This doesn’t mean he can’t be productive. Jameis has propped up top-end wide receiver production multiple times and has had multiple WRs with top-end production at the same time. Love the situation and think we could see a bounce-back from Michael Thomas in 2022.

I would offer the same thing for Thomas as I did for Cooks. Start out with an early 2nd, and see if you can get it done. If you need to spend two 2nds, I think it is worth it. I would not spend a 1 st at this point. 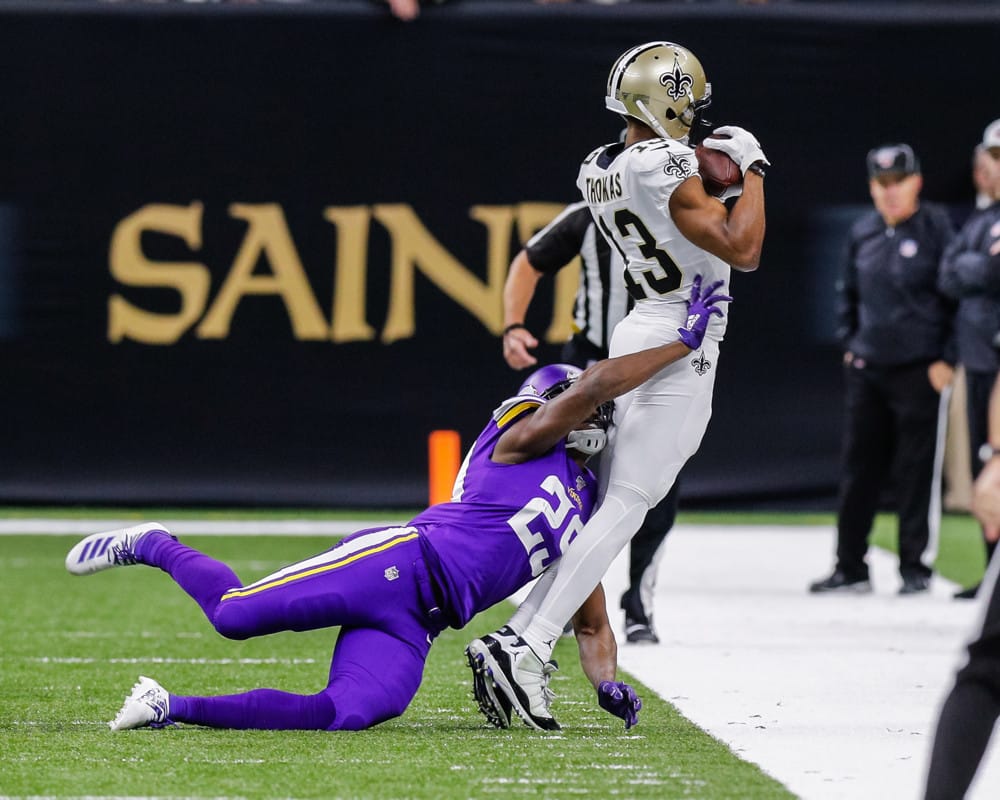 Allen Robinson is a player that I am grabbing everywhere. The price is starting to go up, but I think people forget how good he is. He was great just two years ago, in a bad situation. Robinson isn’t that old either. He is younger than Kupp. My other honorable mention would be DJ Chark.

DeVante Parker appears to be the #1 in New England, and you can get him dirt cheap. I would send a 3 rd over in all of my leagues to see how many shares I can get. Actually doing that right now; the update will be on Twitter.

Zach Ertz is younger than Travis Kelce and is treated like he is on his way out. Ertz will eventually move out of the way for Trey McBride. It will not be this year and might not be any time soon. Ertz was targeted often and used down the field in this offense. This is an offense that will be without DeAndre Hopkins for the first six games.

They also do not have a clear slot option as Rondale Moore is still unproven, and A.J. Green is on his way out. Even when Hopkins comes back, this is a fast-paced offense that loves to pass the ball. Ertz will easily get 100 targets and will be a top 12 tight end this year. I think he can be a top 8 tight end each of the next two seasons.

A late 2nd would get it done, might have to throw in a 3rd. I would pay as high as two 2nds to lock up my tight end position for the next two seasons.

Evan Engram is a player that could give you more than 2-3 years of production. The Jaguars do not have a clear #1 or #2 option on this offense. If Engram stays healthy, he could find himself as one of the target leaders on this offense. With his athletic profile, that could get him a top 12 finish.