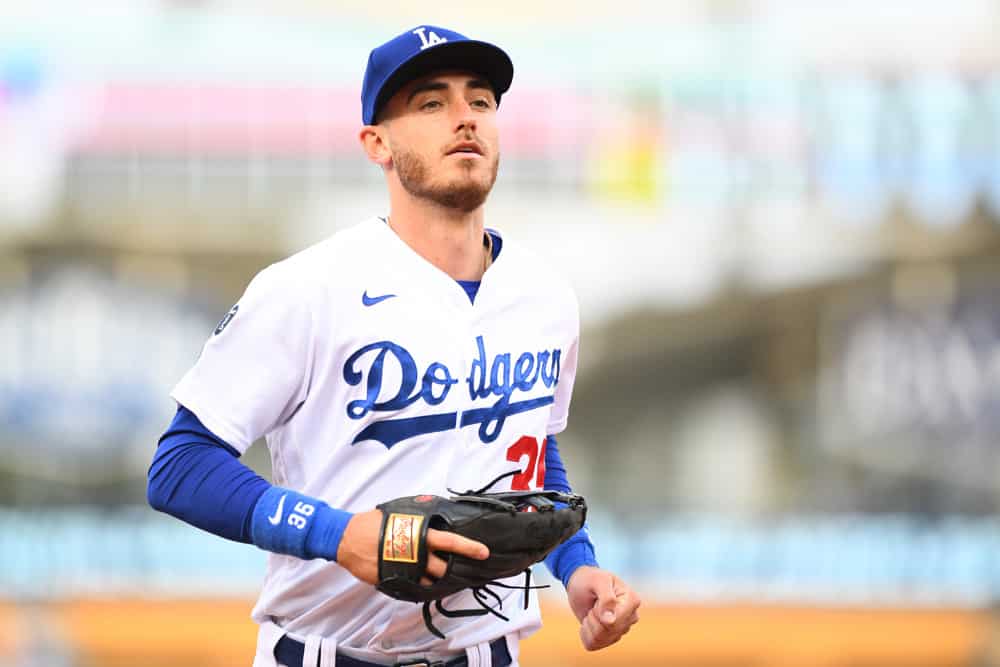 “New year, new me”. I imagine that’s how a lot of players that struggled in 2021 are feeling heading into 2022. One way to find under-the-radar targets for fantasy baseball drafts is to look at players that burned fantasy owners the previous season. In this article, we’ll look at five players that have a shot at turning back the clock.

What is Cody Bellinger at this point? Is he the MVP-caliber player he was from 2017-2019? Probably not. He’s also probably not the version that put up a 48 wRC+ in 2021. Injuries took their toll on the Dodgers outfielder last year, but there were glimmers of hope in the playoffs. In 39 postseason at-bats, Bellinger slashed .353/.436/.471. The lack of power remains a concern, as does his health, but a lot of the projections have Bellinger returning to the .800+ OPS hitter he was in 2020. If that’s the case, there’s value to be had in fantasy baseball drafts even if Bellinger hits near the bottom of the order in this loaded Dodgers lineup.

Cody Bellinger talks with @kirsten_watson about making offseason adjustments to his swing and expectations for the #Dodgers in 2022. pic.twitter.com/8Z53FaxBcq

It was a rough start for Lindor in his first year with the Mets. Lindor slashed .194/.294/.294 combined in April and May, but something clicked after June 1st. Lindor looked like his old self, slashing .252/.340./482 over his final 324 at-bats of the season, finishing with 20 homers and 10 SB on the year. Projections like the 28-year-old to flirt with 25 homers and 15 SB in 2022. He’s no longer the elite offensive hitter he was before, but you can relax knowing that Frankie is your everyday shortstop.

The Philadelphia Phillies ace struggled to keep the ball in the yard (1.3 HR/9) and strand runners (66% LOB%) which led to a 4.63 ERA that was well above his xERA of 3.37. It wasn’t all bad for Nola. He put up a career-best walk rate of 5.2% to go along with a 29.8% strikeout rate (T-6th among MLB SP). Adding the likes of Kyle Schwarber and Nick Castellanos to a lineup that already features Bryce Harper and Rhys Hoskins, the Phillies will be able to put crooked numbers on the scoreboard. That should help Nola in the win department as well.

A nagging back injury, landed Yelich on the injured list twice last season. As a result, it seemed to sap the power out of his bat, as he hit only nine homers in 475 PA. While he’s no longer a perennial MVP candidate, Yelich still has 25 HR, 15 SB potential. A player that was taken in the top 15 of fantasy drafts a season ago, Yelich could go overlooked heading into 2022 as a bounce-back target.

After a scary battle with COVID-19 that forced him to miss the entire 2020 season, Rodriguez returned to the hill and won 13 games for the Red Sox. Despite career highs in strikeout rate (27.4%) and walk rate (7%), Rodriguez put up a 4.74 ERA. An inflated BABIP (.363) and a poor strand rate (68.9% LOB%) were the root causes. Now a member of the Detroit Tigers, “E-Rod” will have a lot of things working in his favor. First off, getting away from Fenway Park and the other hitter-friendly ballparks in the AL East will be a boost. Comerica Park was the 6th most pitcher-friendly stadium in MLB last season. Add it all up and Rodriguez makes a solid starting pitching option for fantasy drafts in 2022.

Fantasy Baseball Pitcher Sleepers: 5 Pitching Sleepers to Target in Your Draft
10 MLB Rookies Who Could Help You Win Your Fantasy League