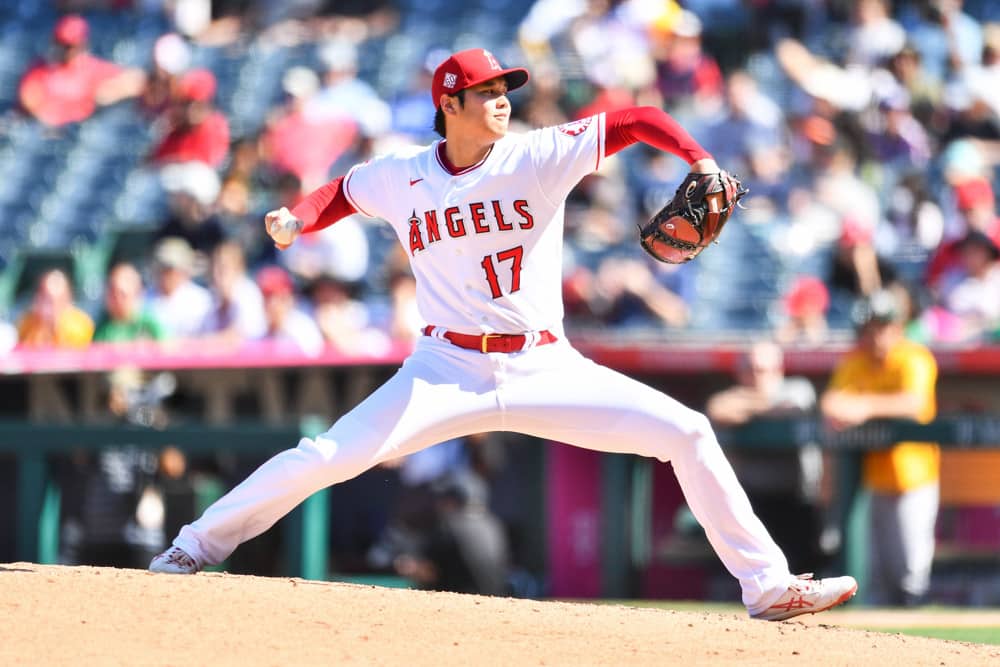 The beginning of the best 162 game regular season is right around the corner. Baseball is a tradition, and there’s nothing better than placing and owning MLB prop bets throughout the year. In this article, I am covering baseball props specifically around the end of the year MLB Awards. All MLB player prop odds used are MLB betting odds directly from the WynnBET Sportsbook. This MLB Preview will give MLB Awards best bets on both leagues’ MVP, Cy Young, and Rookie Of The Year Award winners.

Strategies For Betting on MLB Props

There are just a few simple rules that I recommend you live by when selecting your favorite MLB player prop. To avoid tailing a player’s letdown season, it is usually best if you don’t bet for a player after they signed a contract. After signing a new life-changing contract a lot of players like to slow down their grind and enjoy the MLB experience. Also, do not take a gamble on a player playing for a new team. Sometimes there is an exception, but a change of scenery isn’t always great for a player. Bet on a player if it’s their contract year! Players know that they have to give it all they’ve got during their contract year in order to make themselves the amount of money they want to make when free agency comes around. Lastly, whether you like analytics or not, journalists vote on these awards at the end of the year and WAR heavily impacts their vote. Now let’s get into the picks!

When you look at the 2022 American League MVP category it gives off a clear three-horse-race vibe. The frontrunners for the AL MVP odds currently sit at: Shohei Ohtani +400, Mike Trout +425, and Vladimir Guerrero Jr.+475.

We saw it happen last year –  Vladmir Guerrero Jr. put up a near Triple Crown campaign with a .311/.401/.601 slashline (Batting Average/On Base Percentage/Slugging Percentage) with a 6.8 WAR and still didn’t win the award. Last year Shohei Ohtani came off of Tommy John surgery and turned in to a superstar. After last year we figured out that a healthy Shohei Ohtani may never be able to lose the AL MVP Award. In 2021 the Japanese phenomenon hit .257 with 46 home runs and a 9.1 WAR with an OPS of .965. Don’t forget Ohtani pitches as well, and went (9-2) with a 3.18 ERA, and 156 strikeouts in 130.1 innings pitched. As long as Ohtani is injury-free and puts up average seasons on the mound and at the plate, he is the most valuable player in the league and for the Los Angeles Angels – therefore he will win the award.

The odds-on favorite to win the National League MVP in 2022 is the Washington Nationals’ Juan Soto at +275. Although Soto is a pure hitter, the superstar is not a five-tool player. There is value to be had in the NL MVP category, and I have two players with all-around skills that have a great shot to take home the award in ’22.

I am personally banking on a tremendous bounce-back year for Atlanta Braves outfielder Ronald Acuna Jr. The Venezuelan was 82 games into last season when he had an ugly knee injury ruling him out for the rest of the year. At the time of Acuna Jr.’s injury, he was well on his way to his goal of 40 homers (24) and 40 steals (17). Acuna Jr. finished 2021 with a slash line of .283/.394/.596. The Braves enter the 2022 season without their Golden Boy Freddie Freeman. They did acquire Matt Olson in the offseason but I expect Ronald Acuna Jr. to fill Freeman’s shoes.

Ronald Acuña Jr. throttling a baseball off the scoreboard and announcing he’s back is exactly what I needed to kickstart my endorphins today. pic.twitter.com/qo0CItKpRr

In the offseason, Los Angeles Dodgers’ shortstop Corey Seager signed a big deal with the Texas Rangers. The Dodgers prepared for Seager’s departure and acquired the Nationals’ SS Trea Turner. During his short time in Dodger blue, the 28-year-old expressed his desire to be the team’s shortstop. In ’22 Turner gets his wish. Last year Turner bolstered his power tremendously, turning into a true five-tool player as he dropped 28 bombs during the ’21 campaign. The NC State grad led the MLB in batting average last season (.328) and had an OPS of .911. Lastly, the man is in a contract year on the 2022 Dodgers. This lineup may be the most stacked lineup we’ve ever seen. Stick Turner wherever in this lineup and he’ll get hits, steal bags, and score runs. Trea Turner is a serious threat to win the 2022 NL MVP Award. If I haven’t sold you yet, just watch how swaggy he makes this nonchalant slide look.

In 2021 we saw Robbie Ray as a longshot emerge into the American League Cy Young Award winner. Ray went 13-7 with a 2.84 ERA while sitting down 248 batters in 193.1 innings of work. I’m staying away from Ray this year as he just signed a huge contract in Seattle coming off of a career year. Looking at the category I don’t feel too comfortable laying chalk, I’m looking past the frontrunners.

Chicago White Sox RHP Lance Lynn has finished in the top 10 of the AL Cy Young in each of the past three seasons. Dallas Keuchel nicknamed Lynn “Tonka Truck” during the ’21 season because of his stature and incredible durability. Lynn has started at least 28 games in each of the past eight *full* MLB seasons. One reason for that is Lynn’s dedication to a steady diet of fastballs. Via baseballsavant.mlb.com, 92.4% of Lynn’s pitches in ’21 were some variation of a fastball (four-seam, cutter, sinker) which led all starting pitchers last season. In 28 starts last season, Lynn owned a 2.69 ERA and 176 Ks in 157 IP. This is the Tonka Truck’s second season in Chicago and I expect him to be in the thick of the AL Cy Young race again.

Lance Lynn turns Mike Trout into a bad hitter by throwing fastballs in the zone, a breakdown pic.twitter.com/Lb2oUL0dnd

Jacob deGrom enters ’22 coming off an injury in ’21 that shortened his season. Even though deGrom only made 15 starts last season, his 1.08 ERA and 146 K  in 92 innings were good enough for a ninth-place finish in the NL Cy Young race. Since deGrom’s Rookie of the Year season in 2014, he has won the NL Cy Young Award twice and has finished in the top 10 of the voting in all but one of his seasons. We’re getting a good price on a historically dominant pitcher coming off an injury and you can’t pass it up. You also have to love that Max Scherzer, a three-time Cy Young Award winner, is in the same stable to provide some friendly competition. Scherzer came third in voting last year and is tied with Burnes for the second-best odds to win the NL Cy Young at +800. Look for deGrom to pick right back up where he left off in ’21.

Every Mets player was at the top step as Jacob deGrom struck out the side in his first inning since July 7th pic.twitter.com/Do0vI0r5uY

American League Rookie Of The Year

With one look at our trusty friend Jonathan Mayo’s Top 100 MLB Prospects list we can see that this year we have an electric race for the American League Rookie Of The Year. Mayo’s top eight players in his Top 100 prospects list are in AL organizations. Six of those players are slated to make their debuts in the 2022 season. Colby Dant and I interviewed him prior to the college baseball season so if you’re in to MLB prospects check out that podcast.

If you have seen any highlights from Bobby Witt Jr. you would understand the hype. At the plate, the Kansas City Royals shortstop has projectible power and the ability to hit for average. The most impressive thing about Witt Jr. is how identical his swing is to the current best player in the game, Mike Trout’s. With solid defense and speed, this five-tool player is rightfully Mayo’s #1 MLB prospect and the odds-on favorite to win the AL ROY in ’22.

The Detroit Tigers have been bad for quite some time now and as a result they have two top-five draft picks that are MLB ready in ’22. Spencer Torkelson was the #1 overall selection in 2020 and displays pure power at the plate. Torkelson doesn’t get any cheap hits. He made a quick climb through the minor league system in ’21, going from Single-A to Triple-A, which is not a common achievement for minor league prospects. In 121 minor league games, Torkelson has hit 30 homers and batted .267. Torkelson ranks as Mayo’s fourth best MLB prospect.

Although they love the power Torkelson provides, some Tigers fans believe that Riley Greene may pan out to be a better all-around MLB player. Greene was drafted out of high school as the fifth overall pick in the 2019 draft. In 181 career minor league games, Greene has slashed .292/.375/.493 with 29 tanks and 21 stolen bases. Greene is ranked fifth on Mayo’s Top 100 MLB prospects list. The reason why I like taking a gamble on both Greene and Torkelson is because the Tigers project to be in a playoff race this year with the extra playoff spot. These two rookies will be playing a huge role in the Tigers’ pursuit of the third wild card spot.

National League Rookie Of The Year

Unlike the AL, betting on the National League Rookie of the Year will be a shot in the dark. In a questionable move, the Pittsburgh Pirates just sent 6’7″, 220 lb shortstop Oneil Cruz to Triple-A. He was the odds-on favorite to win the NL ROY. Even though I really like Cruz, we don’t know if the Pirates are manipulating his service time on his contract. Therefore who knows when he will be called up. I don’t feel too confident in any of these guys but I know I don’t want to eat chalk with an Oneil Cruz play.

Japanese sensation Seiya Suzuki is where I’m going to turn to win the NL ROY. Suzuki came over to America from Japan to sign with the Chicago Cubs in the offseason. Metrics predict that the 27-year-old could reach up to 30 see-yas (home runs) this season. Suzuki played in the NPB for nine seasons and had a career slash line of .315/.414/.570 and 182 see-yas. Suzuki is an interesting cat and could be fun to follow throughout the season.

Make sure you stay up to date with SGPN as we look to fill your inboxes with everything you need in the preseason to get your baseball betting fill. Also check out our MLB Gambling Podcast for your MLB betting needs.