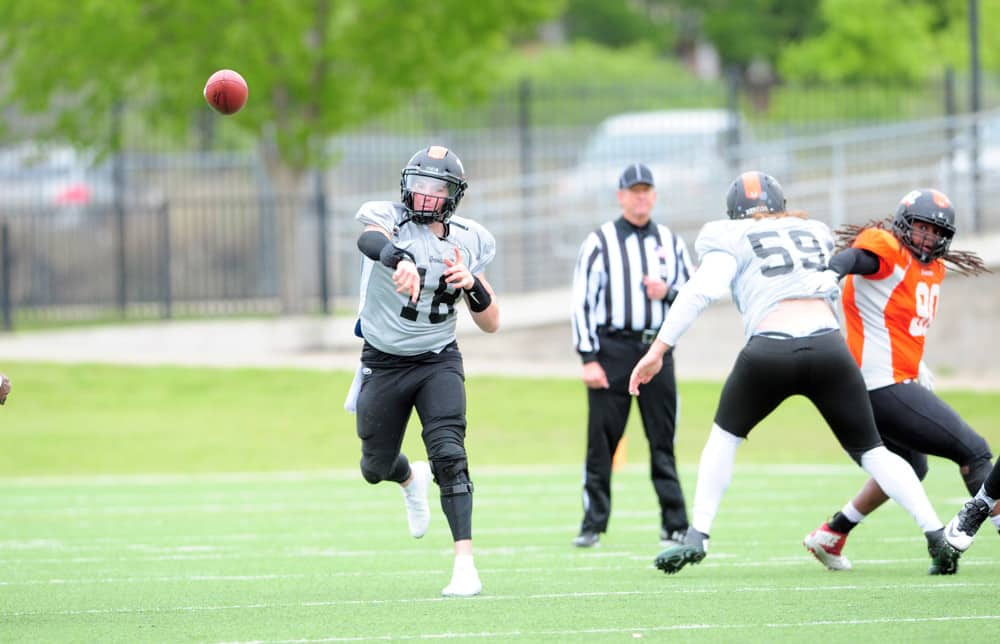 The moment degens like myself have been waiting for was recently confirmed.  There will be USFL gambling.  Some states have laws that require them to gain approval before adding it as an option to bet on like Iowa, Oregon, New Jersey, Pennsylvania, and West Virginia.  All five of these have approved.  Other states where USFL gambling will be allowed include Connecticut, Delaware, Nevada, New Hampshire, New Mexico, North Carolina, North Dakota, Rhode Island, South Dakota, and Wisconsin.  I’m sure this list will continue to grow as we inch closer towards the season.

What Does This Mean For You?

The USFL games begin on April 16th. This means you’ll be able to bet the spreads, money line and over/under on games. We will most likely see USFL gambling futures hit soon.  DraftKings has already confirmed they will carry USFL gambling and other sportsbooks are likely to follow. We have also had confirmation that AltFantasy will have season long USFL fantasy football. If USFL Gambling starts drawing enough interest it would not surprise me to see daily fantasy to follow on DraftKings.

Now that you know USFL gambling is around the corner you may be wondering who you should bet. With all teams being brand new, we will get a better feel once the first week of games are played on April 16th.  However, looking at the coaches and players, let’s look at some of the early championship favorites with estimated futures lines.

Of the eight coaches in the USFL, it is hard to find one with a resume as good as Jeff Fisher’s.  Starting as a defensive assistant in 1985 with the Bears right after he retired from playing, Fisher coached up until 2016.  This time included almost 20 years of head coaching experience in the NFL.  A career coaching record of 178-171-1, Fisher had the first pick in the draft and selected quarterback Shea Patterson.  Patterson played college ball at Michigan and now returns to Michigan for his opportunity to succeed in a professional league.  He’ll have offensive playmaker running back Stevie Scott, who is an interesting USFL gambling choice for most rushing yards.  Scott is an extremely strong runner and moves like a freight train.  He’ll also have 6-3 receiver Quincy Adeboyejo.  Adeboyejo not only has speed but height.

#Indiana RB Stevie Scott had 1223 Yards From Scrimmage and 11 Touchdowns in his True Freshman season.

I am VERY excited for what he does in a featured role as a Sophomore. Through one season. Scott checked a lot of prospect boxes as a FR. pic.twitter.com/HaO6S7iiCM

Because of the coaching experience and two quarterbacks that have had success at different levels in Shea Patterson and Paxton Lynch, I expect the Panthers to open up with the best odds to win the first championship in the new USFL.

The Tampa Bay Bandits are led by head coach Todd Haley.  While Haley only has three years of head coaching experience he was involved in NFL offensive coaching for 23 years.  Haley and the Bandits had the 2nd pick of the draft and even at number two, didn’t expect Jordan Ta’amu to make it past the first pick.  Ta’amu has all the intangibles to be a top quarterback and has shown flashes of greatness.  Making his job easier, Haley reunited with former Steelers wide receiver Eli Rogers.  Rogers has the most NFL starting experience in the league and already knows Haley’s schemes.  The offense will also be helped by running back BJ Emmons.  Emmons started his college career at Alabama before ending with Florida Atlantic.

Having a quarterback with Ta’amu and a wide receiver with thirty games of experience in the NFL is going to help the offense gel quickly.  These two added with talented running back BJ Emmons makes them a decent USFL gambling bet.  Most USFL followers feel Ta’amu has a good chance for league MVP.  Because of his following, I expect Bandits to be heavily bet for the championship when USFL gambling lines open up.

By air and by land, QB Bryan Scott (@BryanScottQb) isn't going to let this Championship moment opportunity pass on by. It's a keeper for six and a whole lot of insurance for the rushing TD.

With Bryan Scott having success in spring football in prior years, it isn’t hard to imagine that he’ll do it again.  With a talented, big-play running back and tall receivers all over the field, I wouldn’t be surprised if the Stars were the best offense in the league, making them my top USFL Gambling bet to win the first new USFL Championship.

Now that we have looked at some of the best bets in USFL Gambling, let’s talk about two underdogs.  The favorites are always fun, but everybody loves a Cinderella story.  Especially when you can sprinkle a little bit of money on them, for a big reward.

Kirby Wilson gets his first head coaching experience as he was named the head coach of the Pittsburgh Maulers.  True to Pittsburgh football, Wilson drafted two hard-nosed, powerful runners and fast, hard-hitting defensive players.  Kyle Lauletta out of Richmond will get the first chance at starting quarterback.  Lauletta’s NFL career never took off, however, he was very good in college.  I’m expecting a 1A and 1B tandem with De’Veon Smith and Garrett Groshek.  They are both blue-collar running backs from Midwest schools who can push through tackles and move the chains.  Lauletta will also have a 6-5 wide receiver to chuck it to in Branden Mack.

While the Pittsburgh Maulers are one of the bigger underdogs, a strong defense and clock control behind a running game are a tale as old as time.  If you’re looking for an underdog to place some money on in your first USFL Gambling bets, they are a good one to take a shot on.

The New Orleans Breakers are led by Coach Larry Fedora.  Fedora’s experience comes at the college level and he’ll now get his first opportunity to coach at a professional level.  He’ll get his start with battle-tested Kyle Sloter.  Sloter has battled adversity, from his pro day having 45 miles an hour winds to trying to make it in the NFL.  Sloter has a strong, accurate arm and has experience in a pro-system.  He’ll be aided by running back Larry Rose III.  Rose has quickness and shiftiness and is a very versatile playmaker.  Sloter will have a fast guy to throw to in Johnnie Dixon.  Dixon’s eight touchdowns in college in 2018 at Ohio State averaged 32 yards per catch.

Being a first-time coach at the professional level it’s easy to fade Fedora.  However, Sloter is used to battling from behind and they have put a good amount of speed around him.  I expect Fedora’s team to play fast, wear out, and overwhelm defenses.  They’re an intriguing USFL gambling option.

Just for a quick recap, my pick for the USFL Championship are the Philadelphia Stars.  Bryan Scott is also an excellent option for MVP, along with Jordan Ta’amu.  I also think Stevie Scott has a great opportunity for most rushing yards.  Eli Rogers is a good USFL gambling pick for the most receiving yards.  And if I’m looking for an underdog, my favorite underdog pick are the Pittsburgh Maulers.