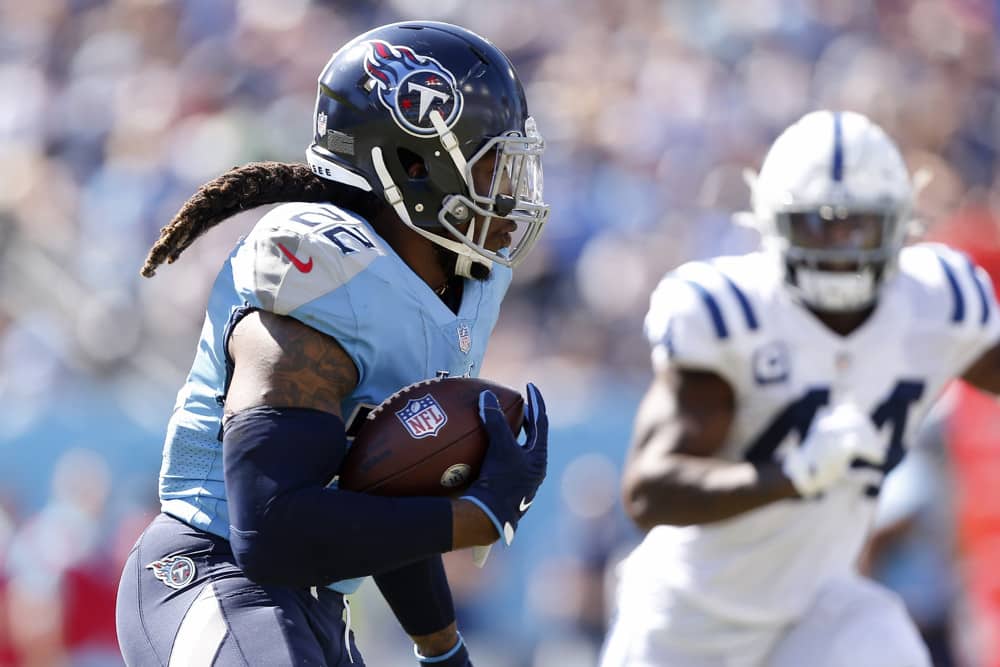 There may be only eight teams left in the NFL postseason, but there is still plenty of injuries to keep track of.  At this stage in the season, typically teams are fairly evenly matched and a team’s health can be the deciding factor. As always, I am here to help provide you with an edge through injury analysis and advice. Whether you’re here for DFS, fantasy football, or sportsbetting knowledge, welcome to the Divisional Round Fantasy Football Injury Report!

Now, this is some of the craziest news on the Divisional Round injury report. Cam Akers was set to be the lead RB for the Rams coming into the 2021 season. Unfortunately, Akers tore his Achilles late in the offseason and was expected by everyone to be out for the entire season. However, to everyone’s surprise, the Rams activated him off the IR three weeks ago. With only five months of recovery, this seemed almost unthinkable. An Achilles tear is one of the worst injuries because it’s a grueling rehab process that takes around a year to return from. I am still not expecting Akers to play a major role in this offense in the regular season but it is worth monitoring.

Akers officially made his magical return to the field in Week 18 against San Francisco. It’s an incredible feat for him to just return to the field in such a short amount of time. However, as expected, there was not much to show in the stat sheet. The young RB had five carries and three catches for a total of thirteen yards.

However, the Rams RB followed up this lackluster performance with a much more encouraging game. Last week, he handled 17 carries and one catch for a total of 95 scrimmage yards. Not only did he sustain a heavy workload but even more impressively, it appears his explosiveness is back! This is a miraculous story and after seeing him play last week, I have much more confidence in Akers performances the rest of the postseason. There is a good chance here to turn a feel-good story into a nice payday with some Akers props this week.

Cam Akers is playing and should be receiving another heavy workload this week.

The Buccaneers lead RB is dealing with a hamstring strain that he picked up in Week 15’s game. Leonard Fournette was quickly ruled out of the game and unable to return. At this time, the expectation is he is likely out for the rest of the regular season and will be placed on the injured reserve list. Tampa Bay has also signed veteran RB Le’Veon Bell to add some depth to the now depleted backfield.

Hamstring injuries are among the most concerning for NFL players. They are difficult to manage as they reinjure easily and greatly hinder a player’s ability. The hamstring muscle generates most of the power for a player’s lower body and allows them to run and jump. Fournette is expected to be back for the postseason but will need to be diligent and careful with his rehab.

All of Tampa Bay is monitoring the Divisional Round injury report closely and a big reason is to see if Playoff Lenny will make his return. RB Leonard Fournette returned to practice last week but was ultimately unable to play. Fournette is working on clearing the last hurdle of his recovery, running full speed without hamstring issues. The Bucs RB still remains on the injured reserve as of Thursday (1/20) but is continuing to practice. Fournette is officially activated off the injured reserve list and will play this week.

Fournette will play this week, a big boost for the Bucs offense.

The holidays have treated Kansas City quite well. After a dominating victory over the Pittsburgh Steelers, they will also receive good news via the Week 17 injury report. Chiefs RB Clyde Edwards-Helaire landed hard on his shoulder suffering a collarbone injury last week. Initially, the fear was a broken collarbone which would have been a lengthy absence. However, X-ray and MRI imaging showed that there is no structural damage to his collarbone. There is some swelling in the area but no fracture or ligament sprain is huge here.

After some initial optimism with the injury, the young Chiefs RB has now missed the last three games. Thankfully, it does appear that this is the week Edwards-Helaire’s fortune changes. He is currently a full participant in practice this week and all signs indicate to him returning for the Divisional Round. However, this does not mean that he will just assume the starting role and receive the majority of carries. The Chiefs will likely still use a RB  by committee approach with Darrel Williams, Derrick Gore, and Jerrick McKinnon.

CEH is expected to return this week but not have a full starter’s workload.

Titans running back Derrick Henry is the heart and soul of this Tennessee offense. Unfortunately, he has been missing from the lineup since Week 9, but his return appears to be on the horizon.  Henry reportedly suffered a Jones fracture and will undergo surgery this week. A Jones fracture refers to breaking the base of your pinky toe and is a fairly common injury in the NFL. Wide recovery timelines have been reported ranging from six to twelve weeks but eight is likely a realistic goal. The bone needs proper healing time and this is an injury that can reinjure if Henry is rushed back to the field. The Titans RB should not be limited once the bone is healed, but when exactly he returns is the question.

Titans star RB Derrick Henry officially returned to practice on January 5th, and has been working on his return since. His surgery was on 11/1/21 which puts him at around twelve weeks of recovery time. This is an optimal recovery period and it now comes down to how Henry’s foot handles his increase in practice workload. All reports are that Henry has been handling practice well and is expected to make his return this week. The Tennessee Titans officially activated Henry off the IR, meaning he will play Saturday.  Things seem to be falling into place well down in Nashville if the King is truly returning!

Henry is activated off the injured reserve list and will play this week.

This Divisional Round injury report is finding a home in the backfield of Tampa Bay. Buccaneers RB had a golden opportunity to become the leader in the backfield following Leonard Fournette’s injury. This chance came and went as Jones picked up an ankle injury in Week 17 against the Jets. The specific nature of the injury has not been disclosed at this time. However, based on his needing a walking boot until recently and his prolonged absence, it is likely a high ankle sprain. These sprains are more difficult to recover from than a typical ankle sprain. More force is required for these ligaments above your ankle to be affected and therefore more damage typically occurs.

An average recovery timeline for a mild high ankle sprain is around four to six weeks. Unfortunately for Jones, this injury is causing him to miss the start of the postseason and maybe more time. He has been seen working with the trainers this week but is still not practicing as of Thursday (1/20). Although he may be able to run in a straight line, until he is able to effectively make cuts, he will not be returning. The Bucs RB is officially out this week due to his ankle injury.

Jones is still not practicing and unlikely to play this week.

49ers QB Jimmy Garoppolo is currently dealing with a torn UCL ligament in his thumb after being sacked in Week 16. He did not come out of the game but Garoppolo’s play definitely took a hit.  The UCL refers to ligaments in the thumb that help to stabilize the joint. It also allows for grip and pinching to occur with your thumb. Reports are that Garoppolo has a grade three strain, meaning this ligament is completely torn. Not only is the injury going to be painful, but it’s going to be difficult for Jimmy G to grip or accurately throw the ball.

49ers starter Garoppolo has been playing through his thumb injury the past two weeks. To add some more adversity to his situation, he also sprained his shoulder last week. Despite these injuries, neither appear to be major nor will cause him to miss anytime. Head coach Kyle Shanahan affirmed this stating that Garoppolo will be the starter this week against Green Bay. Jimmy G is not 100% healthy at this time but he will be expected to play and produce regardless. It would behoove the 49ers to not have to rely on their ailing QB heavily this week, as he has been affected by these injuries.

Jimmy G is dealing with a thumb and shoulder injury but will play this week.

WR Randall Cobb put together his best game of the season in Week 12 but it came at a price. Near the end of the first half, he caught a touchdown pass and picked up a groin strain along the way. It is now being reported that Cobb’s injury is serious enough to warrant core muscle surgery. Cobb had the surgery that week and the current hope is that he will be able to return in time for the playoffs. The typical recovery timeline is six to eight weeks, so he may be back for the NFL postseason but not fantasy footballs.

Cobb reportedly returned to practice a few weeks ago not even a full month after having core muscle surgery. He has been ramping up the past few weeks and enjoyed the luxury of the Packers’ bye week for an extra week to prepare for his return. The Packers head coach expressed that he approved Cobb’s ability to return after watching him practice last week. Additionally, the Packers are activating Cobb off of the injured reserve list as of Thursday (1/20). The Green Bay WR is expected to play this week just in time to start their hopeful Super Bowl run.

Cobb is returning from a groin injury and will play this week.

Here is a decent example on the Divisional Round injury report of why coaches decide to rest their starters the last game of the season. With the number 1 seed already locked up, the Packers chose to play their guys and it seems to have backfired some. Starting WR Marquez Valdes-Scantling injured his back during the Week 18 game and was unable to return. After not being able to practice last week, he started this week off with limited participation. Although this was originally encouraging, the Packers WR was downgraded to not participating in practice to end the week. He is currently listed as doubtful for this week and is unlikely to play. Luckily, WR Randall Cobb will be returning to the lineup this week.

MVS is still dealing with a back injury which will likely keep him out this week.

This injury report updates until the Divisional Round ends. Make sure to stay up to date on all the latest injuries this season over on Twitter @SGPNFootballDoc!