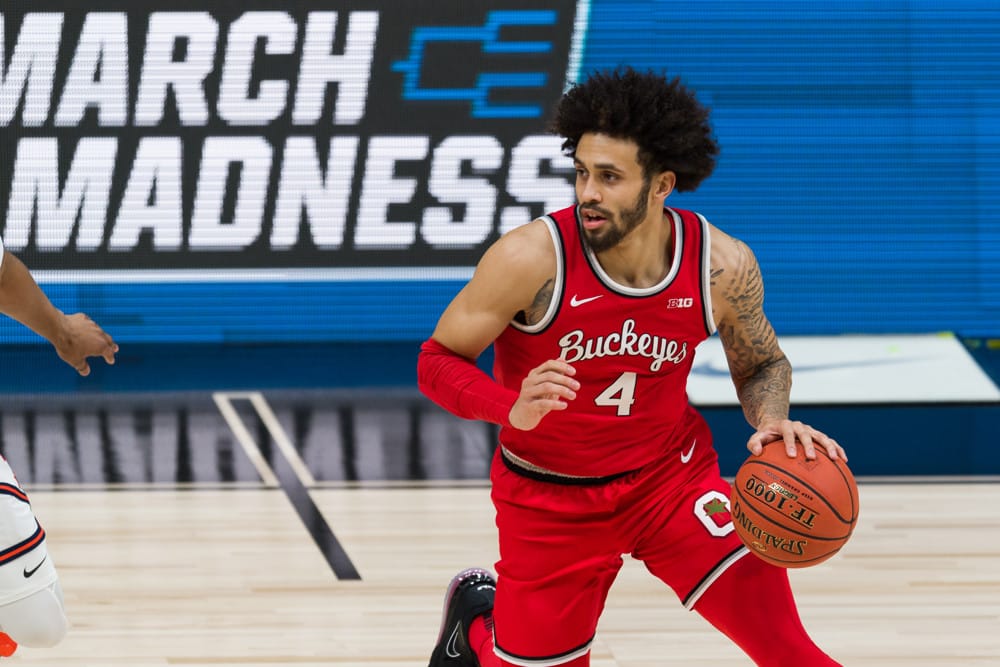 The wait is over, the NCAA tournament is upon us, and I am tasked with previewing the South Region. I firmly believe that the West is the easiest region followed by the South, while the East or Midwest is the toughest. So while the South may not be the hardest region on paper, it might be the most interesting.

Between UNC and Villanova, you have three of the last five national championship winners. The top seeds, Baylor and Ohio State, are both looking to avenge tough losses in their conference tournaments. Additionally, you have several double-digit seeds like Winthrop, North Texas, Utah State, and Colgate who may be primed for big first-round upsets.

Let’s take an in-depth look at the favorites, potential bracket busters, and the first-round games. Let’s do this! 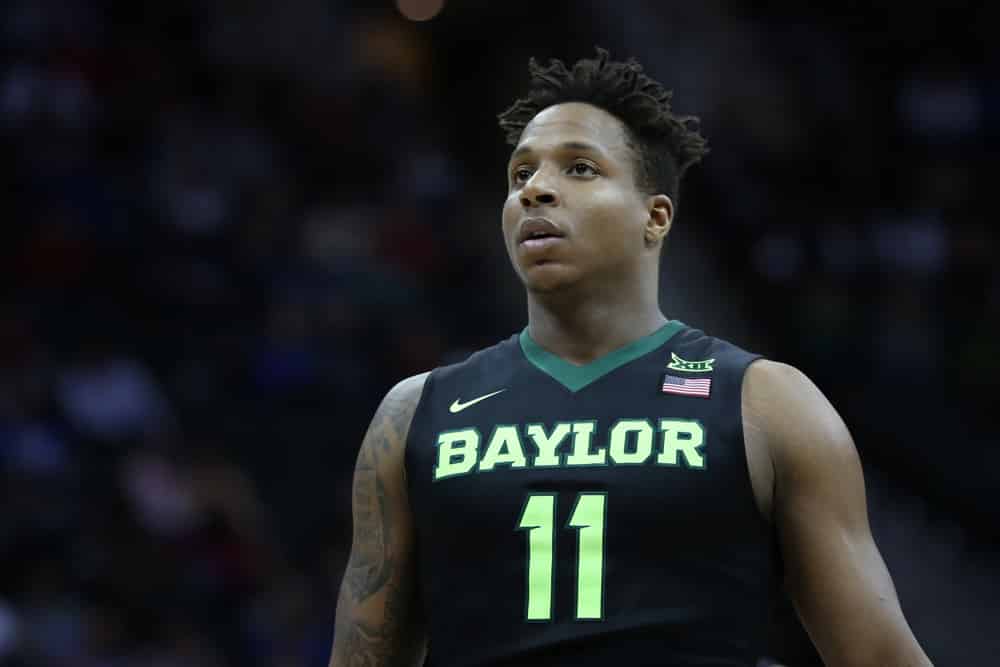 The Baylor Bears come into the NCAA tournament as the second overall seed. They had an outstanding year that included wins over other top schools such as Illinois, Kansas, Texas Tech, Texas, West Virginia, and Oklahoma State. Their two losses were a revenge game against Kansas (Baylor won the first game) and their third matchup vs Oklahoma St (Baylor won the first two contests) in the Big 12 Final.

Baylor’s top five leading scorers are all Guards. (JR) Jared Butler, (SR) Macio Teague, and (JR) Davion Mitchell form the best backcourt in all of college basketball. Presbyterian transfer (SO) Adam Flagler and sharp-shooter (JR) Matthew Mayer come off the bench and provide outstanding depth on the perimeter. The two big men getting the most minutes are (SO) Jonathan Tchamwa-Tchatchoua and (JR) Flo Thamba. Last but not least, wingman (SR) Mark Vital does all of the little things for the Bears that don’t always make the stat sheet.

Overall, Baylor’s season can be broken down into before-Covid and after-Covid. In the midst of playing excellent basketball, the team was forced to take a three week break in early February. The Bears were 17-0 before the break and only 5-2 since while not looking anywhere near as dominant. They’ll need to get their mojo back to advance deep into this tourney.

The Buckeyes just lost a tough overtime battle to Illinois in the Big Ten Tournament Championship game. The schools split the two regular season games. While Ohio State had a fantastic season which includes wins over several other tournament-bound teams (UCLA, Rutgers, Wisconsin, Michigan St, Iowa, Maryland, Purdue and Michigan), they came into the postseason on a four-game losing streak. Perhaps their run in the Big 10 tournament has them back on track.

Ohio State is ranked as the 7th best team in KenPom. Their offensive efficiency ranks 4th best in the country but they’re struggles on defense have resulted in only 79th best in the nation. On the season, the Buckeyes are 17-12-1 ATS and have six Quad 1 wins.

The fate of Ohio State will rest on the inside-outside combination of 6’7” (SO) EJ Liddel and 6’3” (JR) Duane Washington, JR. Assisting Liddel in the frontcourt is (JR) Justice Sueing, (SR) Kyle Young, and (FR) Zed Key. The backcourt also includes Florida State-transfer (SR) CJ Walker and (JR) Musa Jallow while (SR) Seth Towns and (JR) Justin Ahrens pitch in on the wing. In his 4th year in Columbus, head coach Chris Holtman, leads an experienced and well-balanced team. Yet, it should be noted that Ohio State has not reached the Sweet 16 since 2013.

The Razorbacks may have been the hottest team in the country heading into the SEC tournament. Arkansas had won nine straight and 12 of their last 13games before dropping to LSU in the SEC semis, 78-71. Will the loss provide a wake-up call heading into the NCAA’s? Against top-notch competition, Arkansas split with Alabama and beat Florida, but lost two of three vs Mizzou, were swept by LSU, and lost matchups to Tennessee and Oklahoma St. That’s a 3-7 record vs teams in the Tournament. Not ideal for a 3-seed.

Arkansas is ranked 18th in the country on KenPom with the 35th rated offense and 14th ranked defense. They’ll also try to push the ball as often as possible being the 17th fastest ranked team in Adjusted Tempo. On the season, the Razorbacks are 17-9-1 ATS but only recorded 4 Quad-1 wins.

Head coach Eric Musselman leads Arkansas in his 2nd year in Fayetteville. Fans may remember him from a Sweet 16 run with Nevada in the 2018 NCAA Tournament. True freshman (G/F) Moses Moody leads the team in scoring at 17.4 PPG. The frontcourt consists of (SR) Justin Smith who transferred in from Indiana, (SO) Connor Vanover, and (FR) Jaylin Williams while the backcourt is led by (JR) JD Notae, (SR) Jalen Tate who transferred in from Northern Kentucky, (JR) Desi Stills, and (FR) Davonte Davis. While Musselman should get a lot of credit molding this team together, they are young and have zero NCAA tournament experience.

In early January, Purdue had lost three of four games (Iowa, Rutgers, and Illinois) and the Boilermakers were looking more like a bubble team than a 4 seed. Early non-conference losses to Clemson and Miami only reinforced this. Somewhere around that point in the season, Matt Painter decided to give his younger players more minutes. Perhaps as a result, Purdue won 11 of their last 14 regular season games before losing to Ohio State in the conference tournament.

While Purdue is led by (JR) big man Trevion Williams, the young players I mentioned above include freshman (G) Jaden Ivey, (C) Zach Edey, (F) Mason Gillis, and (G) Brandon Newman. Ivey and Edey, particularly, have both really stepped their games up of late. Rounding out the rest of the rotation are veteran guards (JR) Sasha Stefanovic and (JR) Eric Hunter Jr, and (SO) Isaiah Thompson and (JR) Aaron Wheeler.

Purdue is the 13th overall in KenPom with both offensive and defensive efficiency rankings of 23rd in the nation. On the season, they are 14-11-2 ATS. Similar to Arkansas, the Boilermakers also only have four Quad 1 wins but they are 7-7 against teams in the field of 68. After an early exit in the Big 10 tournament, Purdue might be ready to make some noise on the national stage.  Plus, Jaden Ivey is clutch:

The South might be the region to have the most double-digit upsets this year. First, 12-seeded Winthrop is only a 5.5 point dog to Villanova. The public is aware of Villanova’s injury issues and the Eagles of Winthrop went 23-1 this year while winning the Big South. It’ll be up to Jay Wright to scheme up a defense that can limit an offense averaging almost 80 points per game (30th best in the country). Make no mistake about it, Winthrop is a live dog. 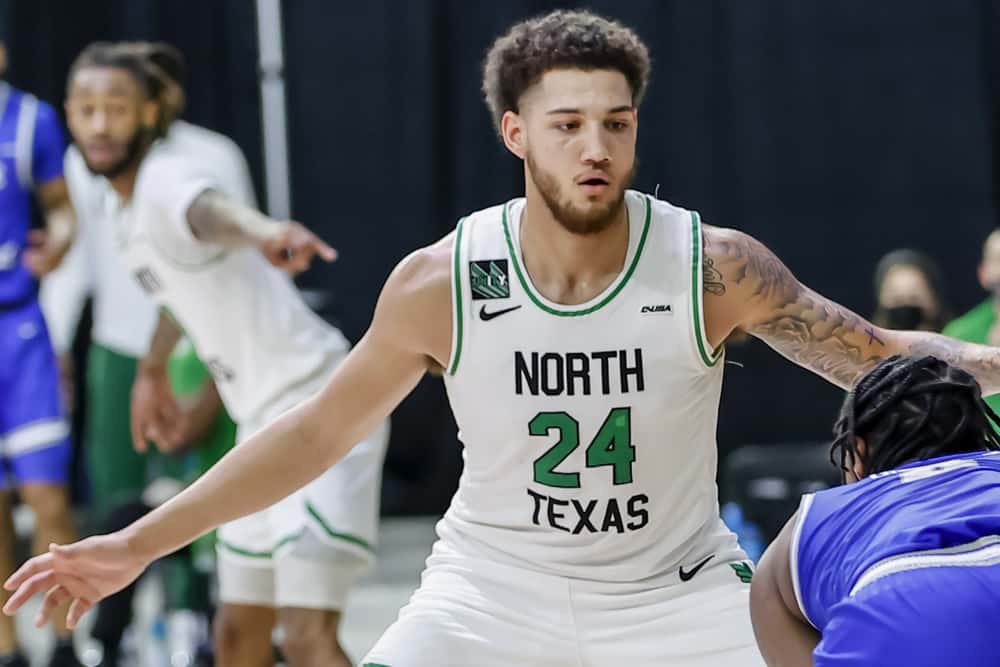 The Mean Green went 17-9 this year and punched their ticket to the big dance by winning the Conference USA tournament. This is an interesting team that hung tough against the likes of Loyola Chicago, WVU, and Mississippi St. Purdue needs to be on the lookout for the senior backcourt of Javion Hamlet and James Reese. North Texas starts four seniors and the fifth is a junior.

The Aggies went 20-8 in a tough Mountain West conference but lost to San Diego State in the tournament final. Utah State had previously swept the Aztecs in the regular season so apparently, they were due to drop one. The (JR) big man from Portugal, Neemias Queta, is one of the best players in the country. He has an opportunity to become a household name vs the more perimeter-oriented Texas Tech team in the South Region.

Seth Davis already picked Colgate to knock off Arkansas, will you as well? A couple of things here: I don’t have a lot of confidence in a young and inexperienced Razorback squad and Colgate has some of the qualities you look for in a Cinderella. Most notably, four upperclassmen perimeter players that can really stroke it from deep.

This is Baylor’s bracket to lose. While a looming second-round matchup vs UNC is interesting due to a contrast in styles (UNC is heavy on the interior while Baylor is a perimeter-oriented team) the Bears should get to the Sweet 16 without any issues. Although a lot of people may be calling for Winthrop and/or North Texas upsets, Villanova and Purdue will hold serve and advance. In the second round, I like the Boilermakers to get by the Wildcats and reach the sweet 16.

On the bottom half of the bracket, Colgate seems to be everyone’s favorite longshot. Although I am not high on Arkansas, I expect them to knock off the toothpaste crew. However, success will be short-lived as the Razorbacks will bow out early to the winner of the Utah State vs Texas Tech game in round 2. Furthermore, I believe the winner of that 6/11 matchup has a decent chance to go all the way to the Elite 8.

Ohio State will take care of business in round one and squeeze past the winner of the Florida/VT game (I’m leaning VT) only to lose the next round. Overall, I’m high on Baylor, Purdue, Texas Tech, and Utah State. Its unfortunate that only Texas Tech or Utah State can advance past the first round. Gun to my head, give me Baylor to beat Utah State in the Elite 8 to lock up a birth in the Final Four.

Make sure you check out our daily College Basketball picks page for all of our expert’s picks for March Madness!