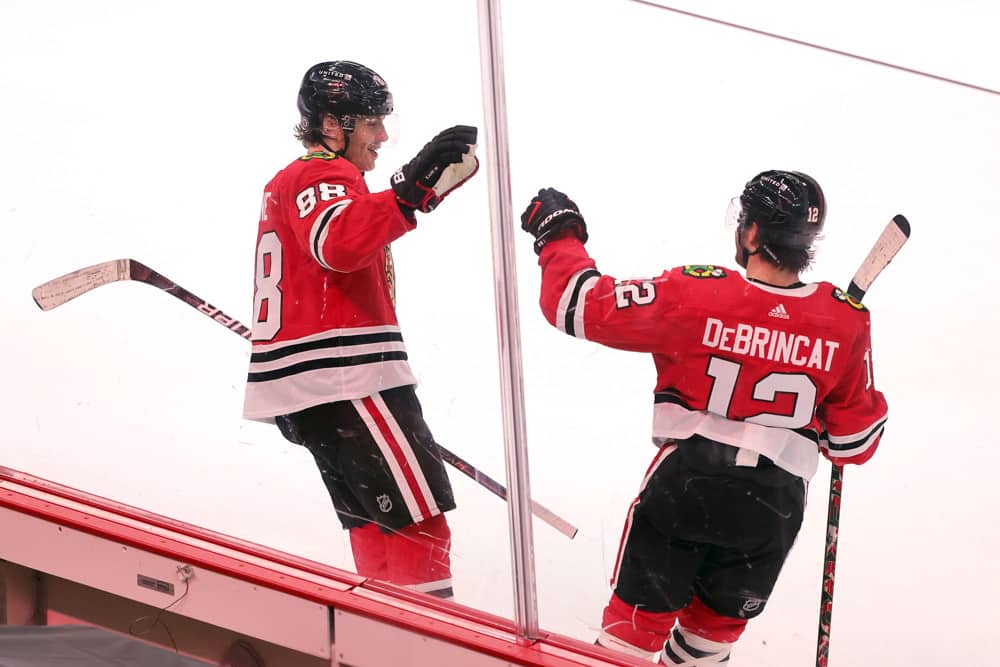 The Central Division is comprised of one elite team, one terrible team, and a great deal of parity in between them. As such, it represents arguably the most competitive division in the league, with any one of these teams (except the Coyotes) capable of making a run in the playoffs.

We’ve already covered the four best Central Division teams according to the betting market, here’s what we make of the lesser rated teams.

The St. Louis Blues went from Stanley Cup victors to a humiliating 1st round sweep in two short seasons. The reasons for this swift demise are chiefly the relatively poor goaltending from Jordan Binnington, who looks nothing like the Blues goalie who helped win them their only Cup, and Alex Pietrangelo’s move to Las Vegas, which has left a gaping hole in the Blues’ defense. What was once a vaunted goal-prevention unit has become a vulnerability, and the attack has hardly compensated for it; the Blues were 24th in expected goals percentage in 2020-21.

Picking up Pavel Buchnevich and Brandon Saad should help shore up the left side, and the apparent return of Vladimir Tarasenko can only be a good thing after his dramatic offseason. Still, they lost their main power-play weapon in Mike Hoffman and did virtually nothing to address an acutely weakening defense.

The sheen of coach Craig Berube and GM Doug Armstrong is fading fast after two disappointing sequels to their 2019 triumph. Other than David Perron and Ryan O’Reilly, the team is markedly worse in virtually every position, especially when you get past the top defense pairing of Krug and Parayko. The Blues no longer scare anyone with their physicality, either because the blueprint to beating them has been exposed with the Avalanche blitzkrieg last year, or because they are simply not as imposing as they used to be.

It is going to be a war of attrition in the Central Division this year, with one or two good teams almost certain to narrowly miss the playoffs. With their horrifying lack of depth on the blue line, and a goalie hitherto unable to recreate his Stanley Cup-winning form, it could only take a couple of injuries to send this team spiraling and miss the playoffs altogether.

The Chicago Blackhawks are back. That is, at least, what their offseason moves would lead one to believe. While some may give Stan Bowman the most credit for his acquisition of Vezina winner Marc-Andre Fleury, we are more impressed by his ability to both offload the Brent Seabrook contract and trade for the sterling defenceman Seth Jones. Adding Fleury does improve Chicago’s situation in net, of course, but Kevin Lankinen actually did a decent job at the position last year, so it may not be the major upgrade one might think.

After moving on from Duncan Keith and Seabrook, the Blackhawks are all but unrecognizable from their Stanley Cup-winning days, with only Toews, Kane, and Andrew Shaw remaining. Having to work around the expensive Toews and Kane contracts for years, management has finally started to put together a strong, young team with plenty of goalscoring potential in DeBrincat and Kubalik; center Kirby Dach, who missed most of last season with an injury suffered at the World Juniors, is another encouraging forward for this Blackhawks team.

This is a bet one would have liked to have made early in the offseason, as there’s been almost entirely one-way action on positive Chicago futures since the markets opened. That said, we do think their offseason moves make them a much more competitive team, and the return of Toews after finally diagnosing his condition as CIRS (Chronic Inflammatory Response Syndrome) should mean a return to the playoffs for the Chicago Blackhawks.

There will likely be five teams to make the playoffs from the Central, and we are confident that the Blackhawks are at least the fifth-best team in the division. Their attacking style will leave them exposed at times, but they do have enough firepower to win any kind of game. In addition to live betting Chicago when they are losing, keep an eye on overs for this team, especially early on in the season if Jones and Fleury have slow starts.

After an awful start to the 2021 season where the Predators were as bad as any team in the league, through tremendous goaltending and a lot of luck they pulled themselves back into the playoff picture to preserve their streak of making the postseason seven years in a row. Long-time GM David Poile does not, however, believe that that achievement was because he has a strong team, as evinced by his offseason decisions to move on from both Viktor Arvidsson and Ryan Ellis. This is a team with eyes clearly on the future rather than on the prospect of short-term success.

These odds are squarely in line with how I project this season for the Preds, which is a middling team at the lower range of the playoff bubble. They will be highly dependent on their goalie Juuse Saros, who, along with Roman Josi and Filip Forsberg, is one of the few positive pieces Nashville has left. If Saros struggles it will be a long season for this team, but if he stands on his head as he has done the past couple years, there is a remote possibility that the Preds sneak their way into the playoffs.

We would lay the -300 for them to break their streak and miss the postseason if we had to. If those odds are too prohibitive, or if you are higher on Nashville, we would recommend a bet on Saros to win the Vezina – after all, it will be extra difficult for Nashville to get to the playoffs if he is not playing at an award-winning level.

For the past few seasons, the Coyotes have been a scrappy, feisty team that punched above its weight, relying on tenacious play and expert goaltending to upset teams with much better rosters. After they got penalized for illegal scouting, however, a radical shift in direction has seen the Coyotes clear out the cupboards and go from having very little draft capital to the most in the league.

Christian Dvorak, Michael Bunting, Darcy Kuemper, Antti Raanta, Oliver Ekman-Larsson, Conor Garland – this is the better part of last year’s team and they’re all gone. In their place are cap dump veterans from other teams and raw prospects that are unlikely to come anywhere near stepping up to the level of the departed players. As such, this is a team that will likelier than not be bottom three in the league.

Even at one of the lowest point totals on the board we cannot help but go under it. There are maybe two good players on this team, defenceman Jakob Chychrun and left winger Clayton Keller, three if you include an aging Phil Kessel, who is likely to be rented out before the end of the season anyway. The goaltending tandem is as bad as it is in Buffalo – actually, it is probably worse, given that Carter Hutton was not even good enough to get the Sabres’ starting job. This is clearly a team in full tank mode, and given the lack of talent on its roster, it would not be surprising in the least to see it win the ‘pain for Shane’ award and get that coveted 1st overall pick.