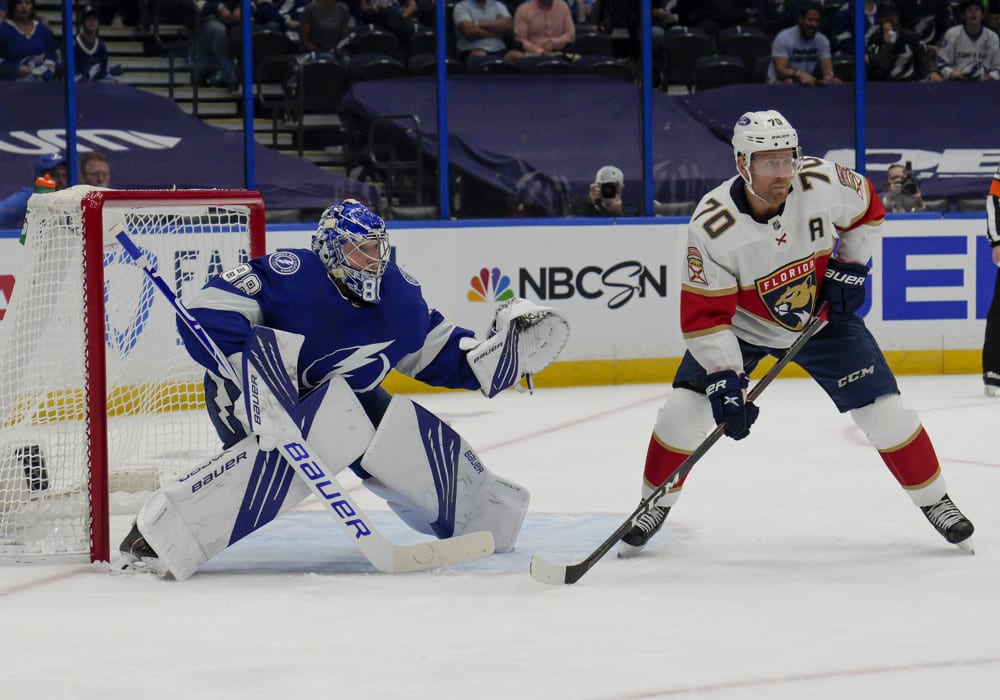 Hockey season is here! Leading up to NHL Opening Night on Tuesday, October 12th, we’ll be previewing each division. Rather than skim through all eight teams per division in one article, we’re going to break it up into each division’s contenders and pretenders. Let’s kick it off with our Atlantic Division Preview for the contenders: Toronto Maple Leafs, Tampa Bay Lightning, Boston Bruins, and Florida Panthers.

The Atlantic is a division with a pretty clear split. They have three of the top five Stanley Cup favorites, and that doesn’t include the up-and-coming Panthers and last year’s runner-up Montreal Canadiens. Still, there is money to be made.

Let’s get into our Atlantic Division Contenders Preview and Betting Guide for the 2021-22 NHL Season!

The Maple Leafs have been poised to take that next step for a few years now, but they still haven’t won a playoff round since 2004. Auston Matthews, John Tavares, and Mitchell Marner lead the way up front for a Toronto squad that is trying to break through.

The Maple Leafs’ franchise record for points in a season is 105 in the 2017-18 season. They’ve never hit the 107-point mark that this line is set at. They were on a 112-point pace last season, but that was also against a weak North Division and the same opponents over and over.

This could be the year they put it all together, but I am going with history here and betting Under 106.5 Points. The team is more worried about winning a playoff round than going all-out in the regular season and that may change their mindset late in the season.

Having said that, I do like the Toronto Maple Leafs’ value here at +900 to win the Stanley Cup. Once they finally get out of the first round, the sky is the limit.

DraftKings has Toronto behind Colorado, Vegas, and Tampa Bay as favorites to win the Cup. I’ll take the +900 odds now and watch them get shorter as the season moves along.

If you’re a hockey fan, or even a casual sports fan, you know about the Tampa Bay Lightning. They fell short a few times in the 2010s before winning back-to-back Stanley Cups over the past two seasons. They’re looking for the three-peat in Champa Bay.

The Lightning are mostly healthy now and are somehow under the salary cap. Andrei Vasilevskiy is one of the best goalies in the game. Steven Stamkos is the captain with Nikita Kucherov and Brayden Point leading the supporting cast up front. On the back end, Victor Hedman is one of the best defensemen in the league and the rest of the D corps isn’t bad either.

Tampa Bay has been there before and will take care of business in the regular season.

Alternatively, Tampa Bay to win the division at +210 might be a better bet for you. You don’t have to lay the slight juice with the over points, and if the Lightning have 107 or more points they are going to be near the top of the division.

The Boston Bruins have somehow been one of the best teams in the league for over a decade now. They’ve made the playoffs in each of the past five seasons, reaching the Stanley Cup Final in 2019.

It helps to have a perennial Selke candidate like Patrice Bergeron at the center, with Brad Marchand and David Pastrnak as two of the best forwards in the league as well. Oh yeah, the Bruins added Taylor Hall at last year’s deadline and signed him over the summer.

This could finally be the year that the Bruins slow down. Rask is injured and Bergeron is getting up there at 36 years old. They lost some of their center depth in David Krejci in the offseason as well. I think this is the year that the wheels fall off for the Bruins.

If you want to go full-fade on the Bruins, this is the bet for you. Personally, I believe in the Panthers this season after pushing the Lightning in the playoffs last year. That’ll leave the Bruins as the fourth-place team in the mix for a Wild Card spot with a deep Metropolitan Division.

The Florida Panthers burst onto the scene last season with 79 points (37-14-5) in 56 games –– a 115-point pace over 82 games. Aleksander Barkov has shed the “most underrated player in the league” label because he’s finally being recognized for his talent.

The Panthers also have Jonathan Huberdeau and Sam Reinhart up front, with offseason additions Sam Bennett and Joe Thornton adding depth down the middle. They have some strength on the back end, too, with Aaron Ekblad and two potentially quality goalies in Sergei Bobrovsky and Spencer Knight.

Florida is an up-and-coming team that has been slept on in recent years. They had 78 points in 69 games two seasons ago and the aforementioned 79 points in 56 games last season. This season, I see Florida keeping up that success (maybe not to the tune of a 115-point season) but they should crack the 100-point mark and hit the over here.

I don’t love this bet, but I think there is some value to be had. The Panthers surprised everyone in the 2015-16 season with 103 points for a first-place finish the year following the Lightning’s Stanley Cup Final appearance and I could see a similar season here.