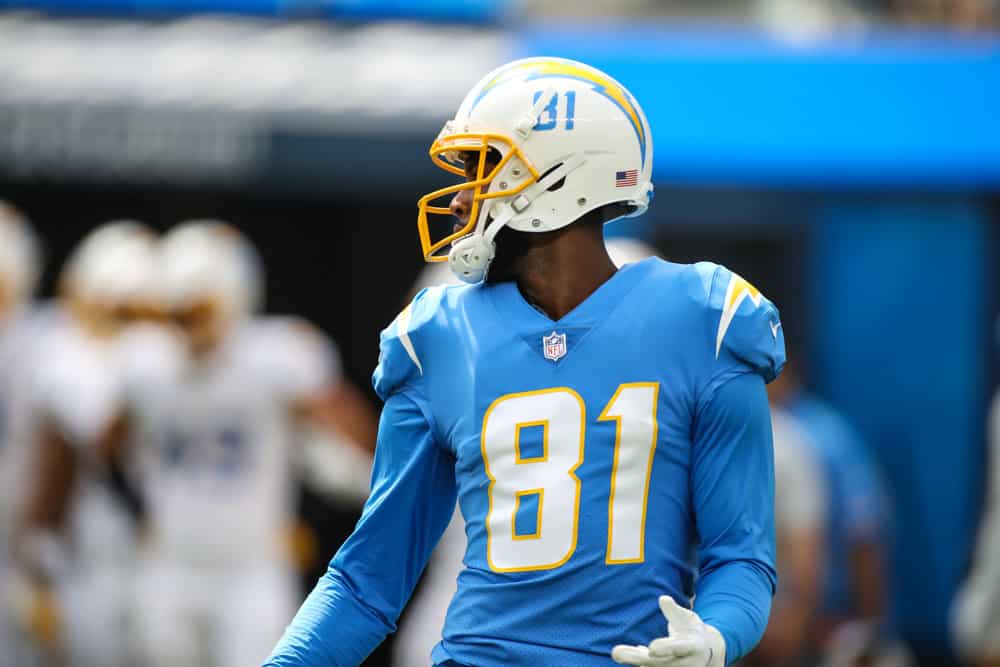 Week 1 is in the books folks! Holy cow was it a wild ride, Thursday night we saw an offensive explosion, followed by a fairly down sunday. However we ended in normal Las Vegas fashion, pure entertainment. We saw injuries strike again sadly, giving way to some surprise performances in multiple games.  I expect Week 2 to have much of the same, lets take a look at who rose and fell in the SGPN Fantasy Football rankings.

In what was to be a juicy matchup against the Detroit Lions, Raheem Mostert sustained a season ending knee injury just two carries into the 2021 season. This gave way for Rookie running back Elijah Mitchell to show case what he had. He took 19 carries for 104 yards, along with a touchdown. He looked quick and decisive on every run. This allowed him to average over 5 yards a carry. With Raheem Mostert officially done for the year Elijah Mitchell seems to be the Week 2 starter. He will split carries with JaMycal Hasty as third rounder Trey Sermon has fallen to the bottom of the depth chart.

This week facing the Philadelphia Eagles. Who are coming off a game in which they allowed over 17 fantasy points to the running backs. I expect Elijah Mitchell to produce an RB2 finish, this allowed him to rise up the fantasy football rankings.

In Week 1 Mike Gesicki was held off the score sheet. Along with that he was out snapped by fellow tight end Durham Smythe. For a player with high offensive upside Mike Gesicki has really let down fantasy managers in Week 1. There was high hope for Mike Gesicki as last season him and Tua Tagovailoa showed great chemistry late in the season.

Facing Buffalo in Week 2, he has fallen in the fantasy football rankings. The Bills only allowed 7 points to the Steelers tight ends in Week 1. I do not expect Mike Gesicki to even crack the top 15 this week let alone be startable.

The off season hype was real folks! We had all heard it before, this was the year Mike Williams will breakout. He is going  to receive  more targets, he is the guy.  Well this time the coach speak was real, he saw 12 targets in Week 1. With those targets he produced 8 receptions for 82 yards and a touchdown. He finished Week 1 as WR14 in PPR leagues. This large role saw him rise in the fantasy football rankings.

Along with this the Chargers are facing a juicy matchup against the Dallas Cowboys. The Cowboys are coming off a poor performance in which they allowed 59 points to Tampa Bay wide receivers. I expect Mike Williams to repeat his WR2 finish in Week 2.

All offseason we saw Saquon Barkley rehabbing from his torn ACL. The time line matched up for him to be active in Week 1. However he was not effective nor was he on the field enough. The Giants appear to be nursing Saquon Barkley back into game shape.  With his 10 carries he only produced 26 yards against a tough Denver defense. He looked like a shell of the old Saquon Barkley we all feel in love with.

With the Washington Football team on the horizon, Saquon Barkley dropped in the fantasy football rankings this week. I do not expect much out of him this week. You could even argue he is a must sit until he shows an uptick in usage. This uncertainty is keeping Barkley down in the Week 2 Fantasy Rankings.

Maybe one of the most surprising story lines of the week involved Jameis Winston. The New Orleans Saints went into Lambeau Field and dismantled the Green Bay Packers. Although only asked to throw the ball 20 times Jameis Winston looked sharp and in command. He completed 70 percent of his throws for 148 yards and 5 touchdowns! This type of performance earned him a lift up the fantasy football rankings.

To go along with that the Saints draw the Carolina panthers in Week 2. Who just gave up 19 fantasy points to rookie quarterback Zach Wilson in Week 1. I expect Jameis Winston will be called upon much more this week, and has QB1 upside.

Why many of us including myself faded the RB4 from 2020, was always a tough question to answer. It has just gotten even harder after Week 1. David Montgomery took his 16 carries for over 100 yards and a touchdown this past sunday. The most impressive part about this was it was against a stough Los Angeles Rams defense. This was good enough for a top ten finish this week.

Facing off against a much softer defense in the Cincinnati Bengals in Week 2. I expect much of the same from David Montgomery. This is why he rose up the fantasy football rankings this week.