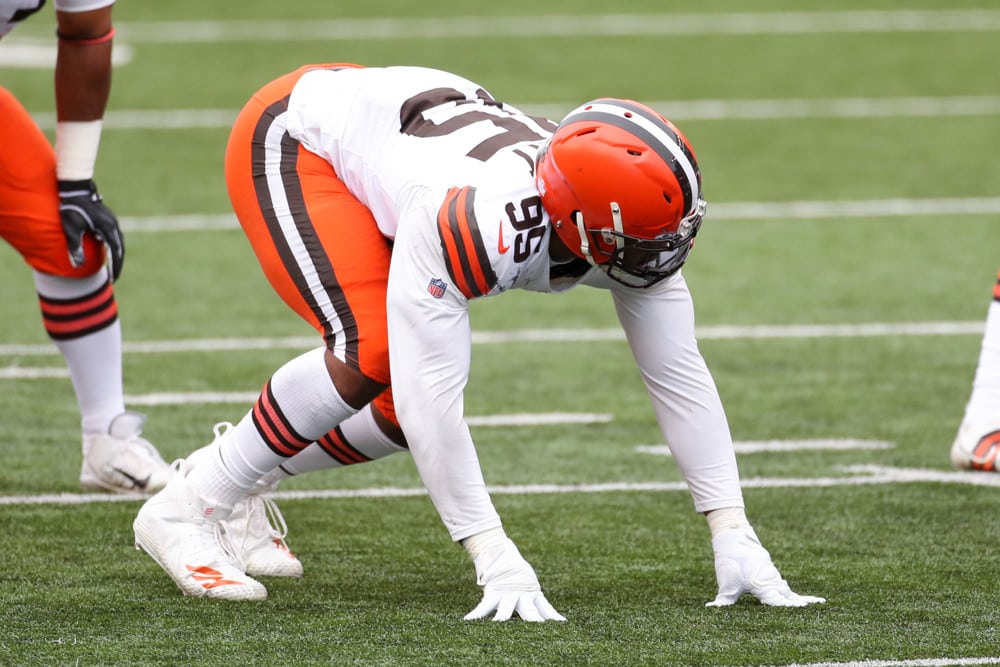 It is officially the week NFL football kicks off! We have all been waiting for this all summer long and let’s be honest we were ready after the Super Bowl. Just like any other bets that are offered, the NFL  awards odds and prop bets are some of my favorite. Last season, I cashed a huge ticket on Alex Smith to win Comeback Player of the Year ticket. Below I will give you my NFL awards odds and prop bets.

Defensive Rookie of the Year

This NFL award is one of the more difficult ones to handicap because it is one of the most wide open NFL award. Over the last 10 years, eight of the winners are players in the front 7 of the defense. The tw0 secondary players to win the award are Marcus Peters in 2015 and Marshon Lattimore in 2017. In addition, of the last 10 winners, all except one, Darius Leonard, were drafted in the first round.

It’s boring to pick the favorite for an award but Micah Parsons makes tons of sense here. First, linebackers are a great candidate to win this award. Parsons will instantly make the Dallas Cowboys better at that position. He is by far the most explosive and fastest player on the Cowboys’ defense. Furthermore, the Cowboys’ defense was one of the worst in the league last year, and adding a player like Parsons will only bolster the defense.

Offensive Rookie of the Year

This one is tough to give out because Mac Jones was close to +1200 before being announced the starter for the New England Patriots. But it’s hard not to bet this. Over the last 10 years, the #1 overall pick has not won the Offensive Rookie of the Year award. The last #1 overall pick to win it was Cam Newton in 2011. In addition, 7 out of the last 10 winners played at least 15 games or the entire season.

Mac Jones is a prime spot in New England. He has the best head coach in the NFL. The Patriots upgraded their offense with the additions of Jonnu Smith and Hunter Henry. The receivers on the Patriots are adequate. I believe if the Patriots find a way to get to clinch a playoff spot with Mac Jones leading the way it will be hard to ignore Jones winning this award. Also, let’s not forget when Mac Jones was on the field during the preseason the drives led by him all translated into points for the Patriots.

The fact that Justin Fields is not the day one starter for the Chicago Bears is mind-boggling. Are they trying to protect him in Week 1 against the Rams and Aaron Donald? Does not make sense to me. However, no one expects Andy Dalton to be the starter for the Bears for long. Justin Fields definitely showed flashes in the preseason. Furthermore, Fields has the ability to use his legs to his advantage. If he is able to rack up rushing yards that will only bolster his case. There is magic to Justin Fields and I like this bet as well!

Comeback Player of the Year

Usually, this NFL regular season award is narrative-driven, case in point Alex Smith last year. We do not have that type of story this season in the NFL. Most of the favorites for this award are coming off major injuries.

Jameis Winston will be the starter for the New Orleans Saints post-Drew Brees era. Last season, Winston was third on the depth chart for the Saints. Winston said he got Lasik surgery done to improve his vision. Will that help Winston in the big easy? Let’s hope so. There is no question on the arm talent of Winston, he can throw the ball. Winston paired with Sean Payton, one of the best offensive minds in the game will only help Winston. Lastly, if Winston goes off this season and throws for 4,000 yards and racks up 30 touchdowns, that will be hard to ignore for a guy who practically missed all of last season. If Winston eats wins in the big easy, look out!

Now I know the NFL does not give awards for sucking. Which is what Carson Wentz was doing in Philadelphia last season. But how much will a change of scenery and being reunited with Frank Reich help Carson Wentz? Furthermore, Wentz has dealt with a foot injury and being placed on the COVID list. The obstacles are piling up for Wentz before the season even starts. But if Wentz is able to lead the Colts to a division title that creates a compelling case.

Coach of the Year

Let me set the stage for this NFL regular-season award. First, the average win total improvement year over year is six wins. Next, the winning coach’s team finished with double-digit wins and 8 out of the last 11 winners won their respective divisions. In addition, the last 11 coaches to win this award guided their team to the playoffs. Lastly, three of the last four coaches to win the award were first-year head coaches.

Last season the 49ers dealt with tons of injuries on both sides of the football, especially at the quarterback position. The 49ers won a total of six games last year. This season not only are they healthy, but the 49ers have the easiest schedules based on opponent win totals. In addition, Kyle Shanahan is 24-7 when Jimmy Garoppolo is the starting quarterback. The 49ers win total is set at 10.5 this season. If they are able to get over this win total they have a great chance to win the division and that will go far for Kyle Shanahan.

The Los Angeles Chargers dealt with Anthony Lynn for years. We can all agree he was one of the worst coaches in the league. He was bad with clock management and making in-game adjustments. They won seven games last year. The Chargers hired Brandon Staley who brings the defensive mindset to the team with talent on that side.  I think this is another team that has the potential to get a wild card spot and if Staley can guide them to the playoffs him being a first-year coach I think he has a real shot to win Coach of the Year. If you look at the other first-year hires, I don’t think any of those coaches have a chance to make the playoffs.

One more coach to keep in mind is Bill Belichick. I think he probably wants to go out there and prove he can succeed without Tom Brady. He’s starting Mac Jones and the pure improvement on the roster is something that is only going to help. It’s going to be tough to ignore Belichick if they win the division and make the playoffs.

I believe there are nine new starters on defense for the Browns but one of the two returning starters is Myles Garrett. The Cleveland Browns added Clowney to the defense but people are automatically assuming Clowney is going to be the player the Texans drafted. He hasn’t been the distributive player in a few years BUT you still are going to have to account for him.

As a result, that may open up opportunities for Garrett. Garrett has double-digit sacks in the last three years and he’s played in all 16 games just once. Over the last two seasons, he’s played 10 and 14 respectively. If he is able to stay healthy and play at least 15-16 games Garrett has the chance to get 15+ sacks and create havoc for opposing offensive lines. Browns do face seven teams whose offensive lines come into the season ranked 20th or worse.

Have we forgotten that Von Miller is still a beast? Yes, he missed the entire season last year with an injury but when he’s on the field he’s a force. Miller has recorded double-digit sacks in seven of the nine years he’s been in the league. In 2013, he only played nine games and had only five sacks. But this defense for the Broncos is one of the best in the league especially the front seven when you have Chubb and Miller.

Offensive Player of the Year

Dalvin Cook is out of the best running backs in the league. Over the last two seasons, Cook has rushed for more than 12 touchdowns in each season. In addition to running for 1,000 yards. The only thing that can slow Cook down this season will be health.

This number was too good to pass up. Yes, Brown is on the same team as Derrick Henry and newly acquired Julio Jones. But I think that will open up chances for A.J. Brown. Ryan Tannehill has that chemistry with Brown. The departure of Jonnu Smith and Corey Davis gives A.J. Brown the chance to have an elevated role in the Titans offense which ranked amongst the top over the last two seasons.

Over the last 10 years, 9 out of the 10 MVPs have been quarterbacks. The lone winner that wasn’t a quarterback was Adrian Peterson in 2012 when he rushed for 2,000 yards. I’ll focus on the nine quarterbacks that won the award. Every single one also won their division and 6 of the 9 quarterbacks were #1 in QBR. So I think that’s something to keep to mind when you’re looking to bet on an MVP especially during the regular season. This is one of my favorite NFL Regular Season awards to bet on.

Seattle hired a new offensive coordinator Shane Waldron this year and we may finally get to see “Russ Cook”.  Last season, in the first half of the season Russell Wilson was the front runner for the MVP award before the numbers started to diminish because Seahawks committed to the running game. Wilson threw for 4,212 yards last season which is the most since the 2016 season. Additionally, he threw 40 TDs most in his career.

Does Russ have more upside? Sure. Early reports from the Seahawks camp are that new offensive coordinator Shane Waldron and Wilson are a natural fit. There is more movement and flow rather than just handing the ball off to their running backs. The wide receiving group led by D.K. Metcalf can be one of the better groups in the NFC West. Is the season we see Russell go for 4,500 yards+ and 40+ passing touchdowns?

The biggest non-player offseason move was the Buffalo Bills getting Brian Daboll back as the offensive coordinator for their team. Josh Allen took a significant stride last season as the starter for the Bills. I personally think it’s more so because of the weapons he has on this team and his accuracy has improved from year over year, along with a commitment to throw the ball early and often, Last season he threw 4500+ yards, 37 touchdowns, and only 10 interceptions.

This year the Bills play below-average pass defenses. The schedule gets significantly easier after week 3 because the Bills play two top 10 pass defenses. Allen also utilizes his running ability effectively. He is averaging 500 rush yards per season and close to eight rushing touchdowns. I believe if he’s able to get to 40 passing touchdowns and 10 rushing touchdowns there’s a good chance he can take down the MVP. The one thing that may put it over the top is if the Bills get the #1 seed in the AFC.