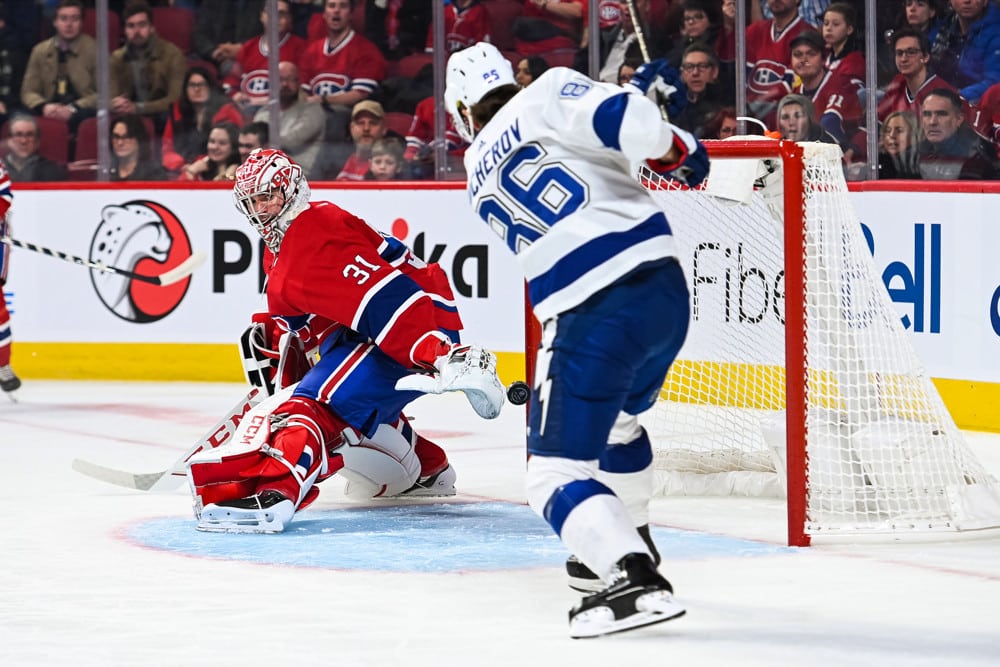 The Tampa Bay Lightning will look to win back-to-back championships as the Montreal Canadiens hope their Cinderella Story ends by hoisting the Stanley Cup.

How They Got To The Stanley Cup Final

The Tampa Bay Lightning were forced to the brink by the New York Islanders in the Stanley Cup Final Semifinals. However, they clawed out a 1-0 win in Game 7 to win the series and advance to the Stanely Cup Final for the second straight year.

The Islanders took Game 4, 3-2, on Long Island thanks to a miraculous last-second save by Ryan Pulock. They weren’t so lucky in Game 5, though, as the Lightning showed their firepower with an 8-0 blowout win.

Tampa Bay couldn’t close it out on Long Island in Game 6 but finished the job in a stifling performance in Game 7. They limited the Islanders to just 18 shots on goal in the 1-0 win.

Here’s how the Lightning fared in their first two series, from our Semifinals preview:

“The Lightning were the No. 3 seed in the Central Division and did not have home-ice advantage in either of the first two rounds. Now, however, they are the second-best team remaining, giving them the No.2 seed in the semifinals.

Despite not having home-ice advantage, the Lightning were slight favorites at around -140 to beat the Panthers in the first round. I thought the Panthers would give them a good fight, and they did for a few games, but the Lightning proved to be too much. Tampa Bay got back to 100% for the playoffs with Nikita Kucherov returning and it showed.

The Lightning won Games 1 and 2 in Florida, dropped Game 3 in overtime at home, then won Game 4 at home to take a 3-1 series lead. The Panthers pushed back at home in Game 5, but the Lightning shut out the Panthers (4-0) to take the series in six games.

After beating the No. 2 seeded Panthers, the Lightning took on the No. 1 seed, the Carolina Hurricanes. Carolina gave Tampa trouble in the regular season, but it was all Tampa in the playoffs. The Lightning were once again favorites at -139, which I listed as the best bet, and took the Hurricanes down in five games.

Tampa Bay once again took the first two games on the road –– with Andrei Vasilevskiy stealing Game 2 ––, but dropped Game 3 in OT at home. They bounced back with a 6-4 win in Game 4 and closed it out with another shutout win (2-0) in Game 5 in Carolina.”

The Canadiens continued to shock the world by taking down the Vegas Golden Knights in just six games to reach the Stanley Cup Final. It’s their first Stanley Cup Final appearance since 1993 when they won it all.

Like the Lightning, the Canadiens dropped Game 1 of their Semifinal series but won the next two. They lost 4-1 in Game 1, but won Game 2 3-2 despite getting outshot 31-23. They stole Game 3 in overtime while getting outshot 45-27 in the 3-2 win.

Montreal was once again one shot away from a win (and 3-1 series lead) in Game 4, but lost 2-1 in overtime despite outshooting Vegas 28-21.

The Canadiens bounced back with a big 4-1 win in Game 5 on the road and finished the job with an overtime victory in Game 6 by a final score of 3-2.

Montreal has been the underdog in every series thus far but it hasn’t mattered.

Here’s how they got to the Stanley Cup Semifinals, from our Canadiens vs. Golden Knights preview:

“The Canadiens’ Cinderella Story continues into the Stanley Cup Semifinals. They took down the Maple Leafs in seven games with wins in Games 1, 5, 6, and 7. They won Games 5 and 6 in overtime as the Leafs choked again and failed to seal the deal.

With three straight wins under their belt, they headed into a second-round series against a rested Winnipeg Jets team. The Jets swept the Edmonton Oilers in the first round and waited for their opponent. But that rest did not do them any good as the Canadiens skated right past them.

The Canadiens were barely a .500 team in the regular season, but they’ve turned it in on in the playoffs thanks largely to their center depth and their goalie, Carey Price.”

Lightning vs. Canadiens: Players to watch

Nikita Kucherov leads the way with an incredible 27 points (5 goals, 22 assists) in 18 games. Brayden Point is a bit behind him with 20 points, but 14 of them are goals with just six assists in 18 games. Alex Killorn and Steven Stamkos both have 17 points. Victor Hedman is just behind them with 16 points (1 goal, 15 assists) in 18 games.

After that, it’s about the depth players for the Lightning as well. Anthony Cirelli has 10 points, Ondrej Palat has nine, and defenseman Erik Cernak has even racked up eight assists.

Not only do the Lightning have the firepower up top and some depth to go with it, but they also have the ultimate weapon: a Vezina-winning goaltender. Andrei Vasilevskiy has the best save percentage (.936) and goals-against average (1.99) in the playoffs. He also has a whopping four shutouts — there have only been 11 shutouts all playoffs. Of course, he’s won all 12 games for the Lightning as well.

Moving on to the Montreal Canadiens now, it’s all really about one player: Carey Price.

Price is just behind Andrei Vasilevskiy in both save percentage and goals-against average. Price has a .934 SV% and 2.02 GAA, both marks stand as the second-best in the playoffs — behind only Vasilevskiy. He has also won all 12 games for the Canadiens.

Up front, only two Canadiens players have double-digit points. Tyler Toffoli leads the way with 14 points (five goals, nine assists). Nick Suzuki is right behind him with 13 points (5 goals, 8 assists) and he had five points in the six games against the Golden Knights. The youngster is coming into his own.

Another youngster that’s coming into his own is Cole Caufield. The 2019 first-round pick has nine points (4 goals, 5 assists) in 15 games. He had five points (four goals, one assist) against Vegas and has points in eight of his last 10 games.

Suzuki and Caufield are going to be a fun duo to watch in the Stanley Cup Final and beyond.

Tale of the tape: Lightning vs. Canadiens

The two teams are actually closer than you may think when you look at the stats.

Both teams have been strong defensively with just 37 goals allowed in the playoffs. The disparity is on the offensive end with the Lightning scoring 15 more goals than the Canadiens with just one more game played (18 vs. 17).

The Canadiens may try to slow the game down, but both teams have played at a similar rate (adjusted) in the playoffs.

Special teams play is going to be huge. The Lightning have been scoring seemingly at will on the power play, but the Canadiens have only allowed three power-play goals in the playoffs. In fact, Montreal has as many shorthanded goals for as power-play goals against.

Interestingly enough, due to the unique divisions for this season, this is a Stanley Cup Final matchup between two teams that were in the same division in the 2019-20 season.

Tampa Bay and Montreal played four times in the 2019-20 season. The Lightning won all four meetings in regulation: 3-1 in Montreal, 5-4 in Tampa, 2-1 in Montreal, and 4-0 in Tampa. Tampa Bay also had an Expected Goals-For Percentage at 5v5 above 50% in all four games.

The Lightning are a juggernaut. They’re better than the Golden Knights but are at a much shorter line (-275) than Vegas was (-500). I get it, the Canadiens proved themselves a bit, but this juice might be worth it.

The Canadiens and Islanders are in a similar build and play a more defensive style. The Lightning are fine with that. They disposed of the Islanders last year in six games and this year in seven.

There are a few other bets I like as well.

If you’ve been following along throughout the playoffs, you’re familiar with the Over 5.5 Games ride I’ve been on. It’s hit in most series and I’m going with it here as well.

Carey Price is good enough to steal a game and the Canadiens are good enough to steal one as well. The Lightning will almost assuredly win two games and I see this going to six or seven games. Four of Tampa Bay’s last five series have gone to six games or more. Bet the Over 5.5 Games (-143) here.

We’ll go with one final value bet to close this out.

The Montreal Canadiens seem like a team of destiny and I can’t argue against getting on their bandwagon for a bet or two. Taking the Canadiens -1.5 Games (+320) or -2.5 Games (+700) isn’t as crazy as it may seem and worth a small bet if you just want some skin in the game and to root for the underdog. They could steal one in Tampa Bay and go off in front of their home crowd.