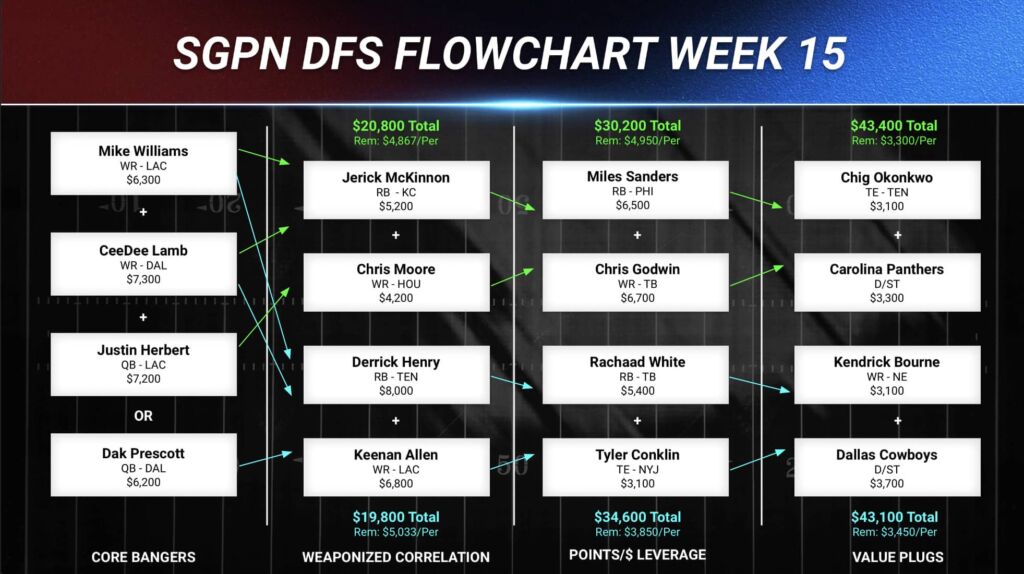 I am extremely pleased to report that last week was my most successful DFS slate in over two years. My stacks were smacking, and my values were potent. The story of the games, as I foresaw in my imagination, is how they went in real life. Short memory. Celebrate and move on. DFS will give and take with a cunning and savage wrath.

Week 15 is another 10-game main slate that demands respect. On the bright side, those season-long fantasy “losers” will be flooding the DFS lobbies with fresh meat and will make for some heavy chalk that will be easy to identify and fade.

The DFS Flowchart is a visual representation of my lineup-building thought process. It is condensed into two diverging paths for the sake of digestibility and protecting you all from knowing just how incredibly loony I am.

The Dallas Cowboys have been my team since I was five years old. Since my fandom has been wilting in despair for 26 years, I have taken a liking to the Los Angeles Chargers and their star QB Justin Herbert (Oregon fan too). Each of these teams has a wonderful matchup this week, with ample opportunity to score loads of points.

Herbert and the Chargers have a date with the Titans and their awful secondary, lining up as a boom week for all of his weapons. Dak Prescott and the Cowboys struggled against the Texans last week, but their date with the Jaguars on Sunday should be a lot less of a challenge through the air. I will be using a diverse variety of stacks within these two games to capture the optimal combination.

Houston is a Problem

Despite their abysmal win-loss record, the Houston Texans are a tough team to beat in a blowout. They have a stellar pass defense, which tends to slow down the best aerial attacks and keep games relatively close. Brandin Cooks and Nico Collins are still dealing with injuries, which opens the door for another impressive week for journeyman Chris Moore.

His markup from last week should dissuade others from chalking him up too much, but one way to break that up is to play him in the same lineup as the Texans DST at the bottom of the board at $2k. Kansas City is liable to commit some turnovers and give that min-price defense value while also giving plenty of room to build a nasty lineup around them.

Philly With the Wiz

From the worst team in the NFL to the best, keep stacking the Eagles! Week after week, they have paid off at leverage for DFS managers. Whether it’s MVP candidate Jalen Hurts, AJ Brown, or Miles Sanders, this offense can get there for us versus the Bears. Sanders is my weapon of choice this week, at cost. I don’t often feel too strongly about RB plays, but this one can really smash at a sub-15 % ownership.

As for Brown and Devonta Smith, they will be in the player pool but sprinkled here and there like kosher salt. I still like rolling out the simple Hurts-Brown stack, as I’ve crushed with the last two weeks. It never seems to be as popular as one might think and sure pays the bills on time.

I introduced a lot of you to rookie TE Chigoziem Okonkwo last week. Everything great I predicted he would do. He did…including coming in this week at a higher salary.

It does not appear that Treylon Burks is ready to come off concussion protocol quite yet, paving the way for a nice matchup for Chig against the Chargers in a game with shootout potential. There is an inherent risk since his usage was split evenly with the useless Austin Hooper, but the talented rookie is a DFS dream: big boom or bust.