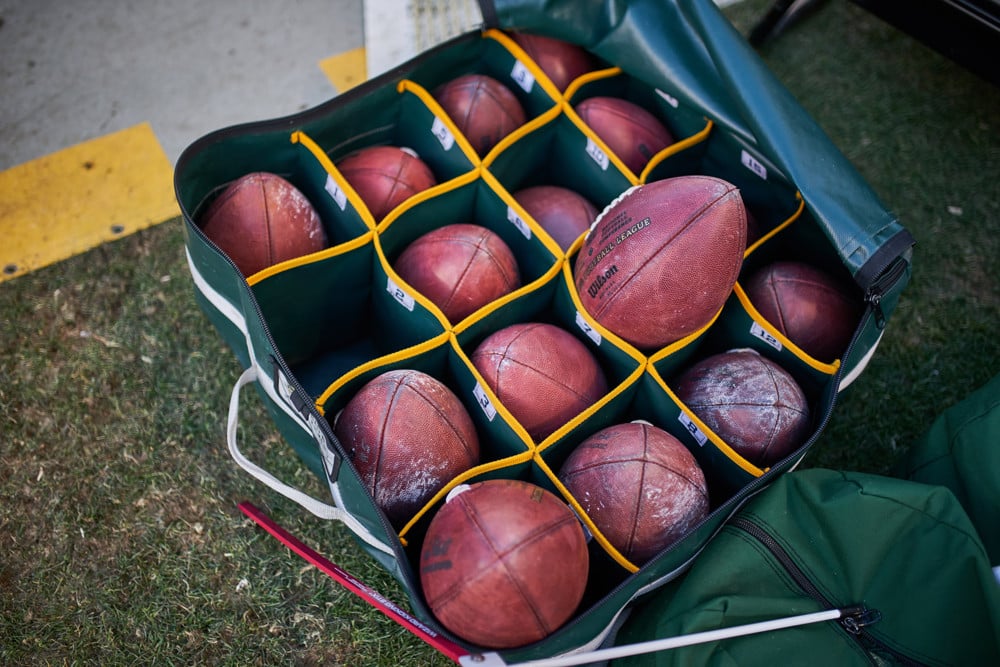 CHICAGO, IL – DECEMBER 16: A detail view of a Green Bay Packers equipment bag is seen full of footballs in action during an NFL game between the Green Bay Packers and the Chicago Bears on December 16, 2018 at Soldier Field in Chicago, IL. (Photo by Robin Alam/Icon Sportswire)

It was a crazy second weekend of NFL action and we are here to help you decipher the snap share, carry split, and target shares from some of the winners and losers in Week Two. This week we will begin to identify trends in snaps as well as recommendations on what this means you should do with your fantasy football teams. These recommendations are based on a combination of things that will be discussed for each player.

Let’s discuss the New England Patriots because we are dealing with a lot of unknowns right now. Ty Montgomery landed on the IR and Devante Parker had an underwhelming performance in Week 1. As a result, we saw both Rhamondre Stevenson and Kendrick Bourne with significant changes in snap percentages. He looked like a solid runner carrying the ball 9 times for 47 yards at 5.22 yards per carry. However, we did see a pretty significant drop-off in rushing attempts and a drop in target share as well. Kendrick Bourne saw a large change in snaps too that almost directly corresponded to the drop in Devante Parker’s snaps. This also corresponded with an increase in target share and is definitely something to keep an eye on moving forward.

Dameon Pierce was a huge disappointment in Week One with an egregiously low snap share at 20%.  He was up to a serviceable 62% this week and he will be the primary back in Houston for the remainder of the season. Rex Burkhead is not the answer and the Houston Texans realized that. Furthermore, Pierce averaged 4.5 yards per carry, and had he found the endzone, we would likely be talking about him more positively. Basically, you need to buy him before it’s too late.

Another interesting sequence of events is with the Indianapolis Colts. We all know that Michael Pittman Jr. was out this week and could potentially be out next week against the Chiefs. While Michael Strachan out-snapped Ashton Dulin, Dulin is capitalizing on the opportunities when on the field. As a result, he managed to double his target share and has seen at least 6 targets in both weeks of football. Despite my love for Parris Campbell, I think it is time to move on and Dulin may be the next in line.

Noticeable Movers (Between 10-20% increase in snaps)

Goodness, what’s with the Washington Commanders? Carson Wentz is slinging the rock and as a result has two Wide Receivers in the top 15 and neither is Terry McLaurin. You may be one week too late, but our man Dave (@dynastydorks) mentioned Jahan Dotson in his Week 1 Dork Report as an every-week starter. Not to mention our conversation on Curtis Samuel on last week’s podcast.  All three of these Washington players are worth targeting in your league.

The Wide Receiver room in New York is in a very odd right now place right now. Sterling Shepard seems to be the only player with consistent playing time. As a result, the Wide Receiver snap shares are being on the fritz in the first two weeks. I would pass until we see more clearly. After all, Brian Daboll did say every Wide Receiver will have to earn playing time.

Giants’ Brian Daboll on Kadarius Toney: Every WR will have to earn their role (msn.com)

It’s also good to see some of the other rookies in this grouping.  With three in George Pickens, Garrett Wilson, and Jahan Dotson all seeing increases in snaps. Pickens is the only one not yet to put up the numbers to back it up. However, it’s likely difficult to obtain Dotson and Wilson after their Week 2 performances, but you could get Pickens on the cheap and he’s going to see an uptick in opportunity now that he is seeing significant snaps.

Marginal Movers (Between 5 and 10% increase in snaps)

Rookie Drake London showed out this week with an increase in both snaps and targets. He also put up a solid stat line and you likely missed the buy window. Evidently, Atlanta wants him to be the guy over Pitts. It’s likely a week too late in dynasty, but in redraft, you could likely still get him at a slight discount.

Tyler Conklin is available in 8% of leagues. He has been on the field for over 90% of snaps and has produced for you. He is currently fourth in targets among Tight Ends behind Higbee, Andrews, and Freiermuth. I would expect this to continue for as long as Flacco is the QB. If he is available, he screams pick up and sell.

A lot has been asked about the Kansas City Wide Receiver situation. I believe based on snap shares that the person to own is Marquez Valdes-Scantling. MVS has had a solid snap share through two weeks never dropping below 73%. He is the guy with the most opportunity and should be targeted before his blowup game.

Let’s talk Arizona Cardinals and Greg Dortch.  At first, everyone was screaming to pick this guy up off waivers. Don’t fall for it! His snap share dropped 20% and he saw a similar drop from 25% to 9% from weeks one to two. As soon as Rondale Moore returns, he will see an even larger drop in usage.

I’ve heard a lot of people talking up Richie James and how you should spend your waiver priority or FAAB to obtain him. We talked about the usage fluctuations already. He’s dropped 30% in snaps and 10% in targets, I see more of this in the future. Additionally, with Wan’dale Robinson getting closer to his return, I expect James to find himself on the bench sooner rather than later.

At this point I’d like to end the article with what I think you should be doing with the personnel I spoke about above. This is obviously not an all-inclusive list but it is a list of those that are either the most significant or getting the most discussion.