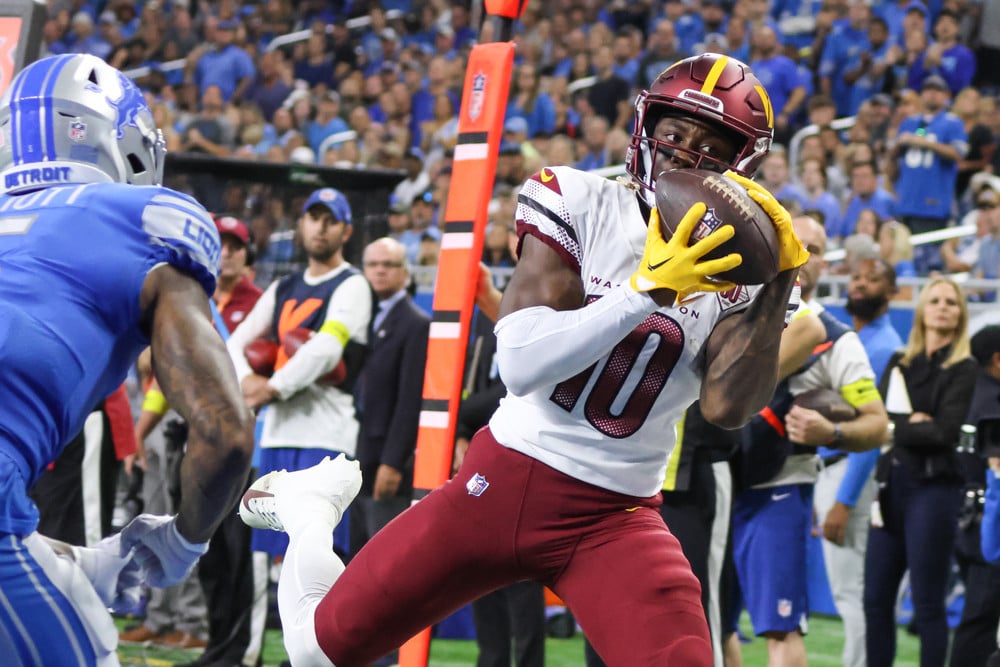 DETROIT, MI – SEPTEMBER 18: Washington Commanders wide receiver Curtis Samuel (10) catches a pass for a touchdown during the third quarter of a regular season NFL football game between the Washington Commanders and the Detroit Lions on September 18, 2022 at Ford Field in Detroit, Michigan. (Photo by Scott W. Grau/Icon Sportswire)

The second week of the NFL season is just about in the books. We were treated yet again with another outstanding slate of games. The Dolphins completed an incredible comeback over the Ravens, in a massive surprise the Jaguars defeated the Cols 24-0, and Cooper Rush led the Cowboys to victory over the Bengals. It was a wild week of games that also had many wide-ranging fantasy implications. The most important being Trey Lance going down with a devastating ankle injury ending his 2022 campaign before it could even get started.

There were a variety of other injuries and playing time changes that will have a major impact on the rest of this fantasy season as well. In this article, I will be highlighting some must-add players this week that are working their way into start/sit conversations. In doing so I hope to help you navigate some of these tough injuries and bye weeks coming up.

Dulin performed admirably in a depleted Indianapolis receiving core leading the team in receiving with 5 catches for 79 yards. This isn’t entirely surprising considering the success he had in training camp as he’s an explosive playmaker. Nonetheless, it was very impressive to see him perform at such a high level and outproduce Parris Campell. It will be hard to trust Dulin when Alec Pierce and Michael Pittman return to the lineup, but no receiver outside of Pittman has had much success this season either. If Dulin continues to perform he could easily ascend into the WR2 role for the Colts.

Jimmy Garoppolo will step into the starting role for the 49ers after Trey Lance suffered a broken ankle ending his 2022 season. It was a devastating blow to fantasy managers who most likely invested a high draft pick to acquire him. We know what to expect from Garropollo at this point, and he doesn’t need to be rostered in 1QB formats. He’s a competent starter with a low fantasy ceiling that won’t likely crack the top 12 at his position most weeks. However, in superflex leagues he should step in immediately as a top 20 option and a low-end starter. George Kittle, Deebo Samuel, and Brandon Aiyuk make up one of the more talented receiving corps in the league which should give him a stable floor.

49ers in 2 possessions with Trey Lance 143 Yards of offense before his injury.

The rest of the game with Jimmy Garoppolo the 49ers had only 230 yards of total offense.

Greg Dortch had yet another impressive performance securing all four of his targets for 55 yards and a touchdown. It was the second straight week this relatively unknown Wide Receiver has made a splash. With Deandre Hopkins suspended, Rondale Moore injured, and AJ Green no longer productive, the Cardinals have been in dire need of a receiver. It’s hard to say what will happen when Moore returns. In the meantime, Dortch should be added in fantasy leagues. The Cardinals have struggled on defense up to this point which will likely keep them in negative game scripts. Moore hasn’t been overly productive to this point either so there is an opportunity until Hopkins returns.

At this point, Tyler Higbee needs to be rostered in all formats. In two games this season he’s received 20 targets and caught 12 passes for 110 yards. This is a considerable workload, especially in a Tight End landscape that once again is without many difference makers. Higbee should be a low TE1 moving forward. Past the top seven or eight Tight Ends, you are mainly touchdown hunting anyway. Higbee is receiving the target volume you want and the touchdowns should come in that offense. If you are stuck starting Dawson Know or another low upside Tight End you should highly consider adding Higbee if he’s still available.

If you need TE help, Tyler Higbee continues to be a focal point for the Rams (idk why)

Are we sure Elijah Moore is the number one target in New York still? Garrett Wilson exploded onto the scene this past Sunday catching 8 passes for 102 yards and 2 touchdowns. Wilson is clearly establishing himself as a favorite for Joe Flacco and is another player that should be rostered in 100% of leagues by next week. It should no longer be assumed Moore is the Wide Receiver to own in this offense. I look at them now as more of a 1A and 1B pairing. It should be noted though that Zach Wilson is projected to come back from his preseason injury soon. Wilson might not have the same relationship with the other Wilson so a shake-up is certainly still possible. However, this is a great sign for owners who feared he might be overshadowed, and he should be a starter in two Wide Receiver sets.

Garrett Wilson was only on the field for 56% of the Jets’ passing plays in Week 1 but led the team with a 23% target rate.

Curtis Samuel appeared in this article last week but we need to make sure he’s rostered in the remaining 28% of leagues. Samuel is another player who has had an outstanding start to the 2022 season. He’s caught 15 passes for 133 yards and 2 touchdowns so far this year. He’s been the best fantasy receiver in Washington which is especially impressive considering he went undrafted in many leagues. Terry Mclaurin is still the better player. However, if defenses are going to focus on him this could open up more for Samuel. It wasn’t so long ago Samuel finished as the WR25 in PPR formats and was a key part of the Carolina offense. Samuel should be rostered in 100% of leagues next week and can be started as a low-end WR3 with upside.

Sterling Shepard is once again establishing himself as the top option in New York after a disappointing start to the season by other receivers. Kenny Golladay has fallen completely out of favor, Kadarius Toney’s role isn’t increasing, and Wan’Dale Robinson has yet to make his debut. This leaves Shepard likely walking into week three as the number one option in the passing game for Daniel Jones other than Saquan Barkley. While this role may not be consistent, Shepard did receive 10 targets this week. He has shown he can be a consistent fantasy producer in the past when healthy as well. So as long as he remains healthy he will be a boom-bust WR4 whose performances will depend on Jones.