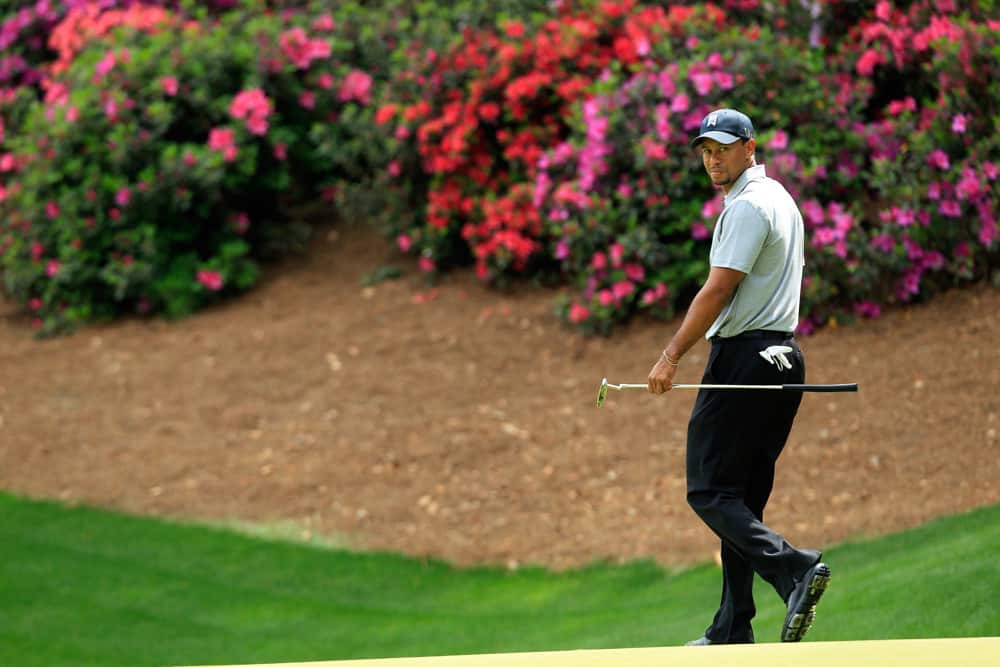 Tiger Woods appears set to return to The Masters! And this week, the books have offered several ways to bet on his performance. Here are some great bets to make for Tiger Woods’ performance at The Masters.

Win a golf trip to @WynnLasVegas 🌴

Tiger Woods Round 1 Score At The Masters – Over/Under 73.5

There’s a few things going against Tiger Woods on Thursday. For one, this is his first competitive round of tournament play in well over a year. While leisurely practice rounds are a step in the right direction, the fire in the crucible of a tournament is a whole different beast. And for years, we’ve been pounded over the head about how awesome Tiger has looked in practice rounds, only to be let down once the tournament has started. Go here for more info on how to bet the Masters.

The other big thing going against Tiger Woods is the weather. While rain leading up to the Masters have softened the golf course up, it’ll still play pretty difficult on Thursday. Temperatures will only reach about 70 degrees, which will make Augusta National play a little longer. There is low humidity in the forecast. And the wind is expected to be out of the West with gusts up to 25 MPH. That matters for two reasons. First, the wind and low humidity will quickly dry out the greens and make them unreceptive. And second, winds out of the west are the toughest winds Augusta National can have.

The 2016 and 2017 Masters featured quite similar weather conditions as the 2022 one will have. Each tournament received a significant amount of rain on the eve of the tournament. But cold temperatures, low humidity and stiff westerly winds dried up the course quickly. And over the first two rounds of those Masters, the average score of the field was between 74.5 and 75.

Not only are we expecting Tiger not to show signs of rust in his first round back, this line asks him to play a full stroke better than average given the expected playing conditions. That’s an unreasonable ask. Bet the over that Tiger Woods’ Round 1 score will be above 73.5 in the first round of The Masters.

Tiger Woods Round 1 Birdies At The Masters – Over/Under 3.5

The handicap on this prop is similar to that of his opening round score. The likeliest place Tiger will find birdies at Augusta National is on the Par 5’s. But with the wind conditions in the forecast, a west wind makes scoring on the Par 5’s much more tougher. In these conditions, the approach shots into the greens on the 13th and 15th holes are both into the wind. That will make the hole play significantly longer. And the 15th already had 20 yards added to it with a new tee box. Neither hole will be susceptible to as much scoring as it would in better conditions.

Combining this with the expected scoring average on Thursday to be anywhere between 74 and 75, it’s a little bit of a tough ask to expect Tiger Woods to card a bunch of birdies in his first round back. Bet the under on Tiger Woods’ Round 1 birdies at The Masters.

Over/Under Finishing Position At The Masters – 35.5

But this might be a little bit of a suckers bet. Of all the Majors, making the cut at The Masters is by far the easiest. Only 90 play in The Masters, with Top 50 and ties making the weekend. There are several past champions in the field who have absolutely no chance of making the cut (including possibly Tiger!). There are several amateur golfers who have a very low probability of making the weekend. And there are several average to below average PGA Tour players who earned a spot in the Masters with a low-level win last year who won’t be competitive either. Plus, there are always a few clunkers at the top of the odds board who miss the cut unexpectedly.

It’s actually quite plausible that Tiger Woods can make the cut just by everyone else around him failing. And given his vast experience at Augusta National, that may be enough to will him to the weekend. But anything after that is gravy. There’s a chance Tiger may be completely gassed after four rounds and walking around a cold and long Augusta National. So if Tiger does make the weekend, don’t expect much out of him. It’s a little bit of juice to bet this prop, but it’s definitely worth the squeeze.

Even if you’re fading Tiger Woods this week, it’s still remarkable that he’s back after his horrific accident. It looked for a bit like it might be the last time we see Tiger Woods play any event, let alone The Masters. But The Masters is the perfect event for Tiger Woods to make his return to the World of Golf. It will be a special weekend regardless of how he plays.