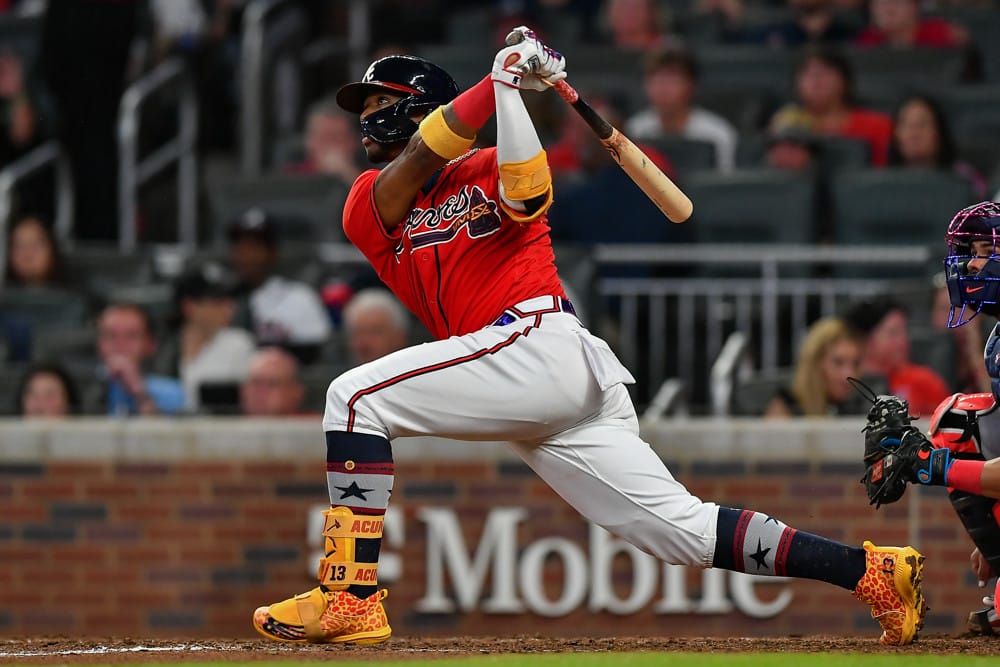 With the season right around the corner, it’s time to take a look at some MLB prop bets for hitters. Is Ronald Acuna Jr. ready to return from a torn ACL? Will Kris Bryant crush Coors Field? Is Seiya Suzuki ready to take over North America? Let’s break it all down in our Hitting Predictions for all 30 MLB Teams: Hitter Props, Picks & Predictions!

Kiner-Falefa is one of the best defensive players in all of baseball, but historically has been a below average hitter. Add in the fact that he’ll bat in the bottom 3rd of the Yankees lineup and he could struggle to eclipse the 172 hits he had in 2021.

The Blue Jays right fielder continues to be one of the more underrated sluggers in all of baseball. Hernandez set career highs in HR (32) and RBI (116) last year. Toronto’s offense will once again be a juggernaut giving Hernandez plenty of opportunities to drive in runs.

Even if you think his 39 homers from a season ago was a bit of a fluke, know that Lowe hit a total of 31 long balls over 138 games in 2019 and 2020 combined. The home ballpark is tough in Tampa Bay, but Lowe will also get his fair share of opportunities at hitter havens like Yankees Stadium, Camden Yards and Rogers Centre.

Boston’s shortstop has become one of the most consistent hitters in the game. Bogaerts has three seasons of 190+ hits under his belt. The Red Sox lineup should be potent once again, giving Bogaerts a shot to push over 600 PA in 2022.

There’s not much to cheer about in Baltimore these days, but Mullins is definitely one of the bright spots on a lowly Orioles squad. The 27-year-old broke out in 2021 and it feels like it’s just the beginning for the outfielder.

The White Sox first baseman has always been great at driving in runs. He’s driven in 100+ runs in six of his eight seasons in the majors. Chicago will have a strong offense with Eloy Jimenez and Luis Robert healthy. It sets up well for another big season for Abreu.

The trade chatter surrounding the Guardians’ third baseman won’t stop, but no matter where he plays this season, one thing is clear: The dude can rake. Much like Salvador Perez, Ramirez’s Barrel% has increased the last two seasons compared to his career numbers. Ramirez’s elite contact and power combo makes him a strong candidate to reach the 35+ homer mark once again.

Leaving the “Friendly Confines” of Wrigley Field for the cavernous Comerica Park would seem like a downgrade for Baez, but both ballparks were comparable when it comes to park factors for right-handed hitters. Even though there’s a lot of swing-and-miss in his game, Baez’s all-or-nothing approach is perfect for a home run prop.

With the Athletics cleaning house this offseason, Murphy should get a ton of at-bats at catcher and DH. The ballpark stinks, but I’m looking at the volume here and feel like Murphy’s got a good shot at the over.

Suarez has power for days, but his numbers could take a dip going from Great American Ballpark to stadiums like T-Mobile Park, Globe Life Field and Oakland Coliseum.

Improved walk and strikeout rate numbers took Tucker’s game to the next level in 2021. Without Carlos Correa, Tucker will be leaned on heavily in this Astros offense. Look for him to take another step in 2022.

The Angels shortstop makes a lot of contact, but it doesn’t have much oomph behind it. Fletcher had a paltry 15.5% HardHit% last season. With a healthy Mike Trout and Anthony Rendon back in the lineup for the Angels, Fletcher is expected to bat in the bottom third of the order. That should limit his opportunities to beat this prop.

Seager showed last season why he’s one of the best hitting middle infielders in baseball when healthy. Health, however, is the issue. Seager played in just 95 games a season ago and only 160 games combined in the last two full seasons prior to 2021.

A hamstring injury limited Schwarber to just 113 games in 2021, but in those games he was able to crush 32 homers. 25 of those homers came in just 72 games as a member of the Washington Nationals. Schwarber is expected to bat leadoff for Philly and with the universal DH now in effect, he shouldn’t have much trouble hitting the over.

The ‘Polar Bear’ bounced back in 2021, setting career-best marks in batting average (.262) and strikeout rate (19.9%). The Mets aren’t a great offense by any means, but Alonso will bat cleanup behind three players (Brandon Nimmo, Starling Marte, and Francisco Lindor) that can get on base in front of him. 112 RBI seems steep, but it’s attainable for Alonso.

Even with the free agent signing of Nelson Cruz and a healthy Juan Soto, the Nationals will struggle to put up big offensive numbers. Bell has only eclipsed the 100 RBI once in his career. I’ll be taking the under.

Chisholm Jr. is one of the most electrifying players in the game right now. The Marlins shortstop is another player that plays half of his games in a pitcher-friendly stadium, but as we saw last season, he’s got light-tower power. If Chisholm can stay healthy, he’ll have a shot to easily beat this prop.

After tearing his ACL in the middle of last season, Acuna Jr. is expected to return at some point in May. Could Acuna hit 37 homers in a shortened season? Absolutely. He hit 24 in just 84 games a season ago before getting hurt. I just think it could take a bit for Acuna to get back to where he was a season ago and I’ll gladly take the under.

A change of scenery did wonders for the burly first baseman as he put up a 112 wRC+ in 56 games after coming over in a trade from Toronto. Tellez is another hitter that should benefit from the universal DH. Miller Park has always been a great place for lefty power hitters as well.

It’s always difficult to know how Japanese players are going to translate when they come over to MLB, but by all accounts, Suzuki is the real deal. Projections are all over the place with Suzuki, but I’ll bet on the power translating to North America.

It was a strong first season in St. Louis for Arenado, but the Cardinals as a whole were a slightly below league average offense (97 wRC+). I’ll bank on the Cards not being as good, giving Arenado less opportunity to drive in runs.

While his .345 BABIP from last season seems unsustainably high, it should be noted that Reynolds has elite speed to beat out infield grounders. He can also swing it from both sides of the plate (.325 AVG vs. LHP, .293 AVG vs. RHP in 2021).

The 38-year-old turned back the clock last season, with 36 homers. The Reds were another team that moved a lot of their key players in the offseason, leaving Votto to carry the offense alone. Because of that, I’m expecting teams to pitch around the future Hall-of-Famer.

In his three full seasons in the majors, Muncy has yet to drive in more than 98 runs. However, this year could be the year. With a full season of Trea Turner and now Freddie Freeman in the mix, this Dodgers squad has no shortage of offensive stars.

A shift to Coors Field will definitely help Bryant’s numbers, but how much? He has registered 161 or more hits only twice in his career and hasn’t played more than 147 games since 2017. With the lack of strong hitters around him, teams could look to pitch around Bryant as well.

The outfielder has shown impressive power numbers despite playing in one of the toughest parks to go yard in. Even though he’ll slot down lower in the order, he should get enough opportunities to launch bombs in San Francisco.

With Fernando Tatis Jr. on the shelf for the foreseeable future, the Padres offense has been weakened quite a bit. Machado is no stranger to having to carry a team from his days in Baltimore, but it will be tough for him to drive in runs with fewer runners on base.

It was only three seasons ago that Marte found a new power stroke, hitting a career-best 32 homers in 2020. Last season he was able to hit 14 in just 90 games. If he’s able to find himself in a more hitter-friendly stadium, 21 homers could be an easy bar for Marte to hit.