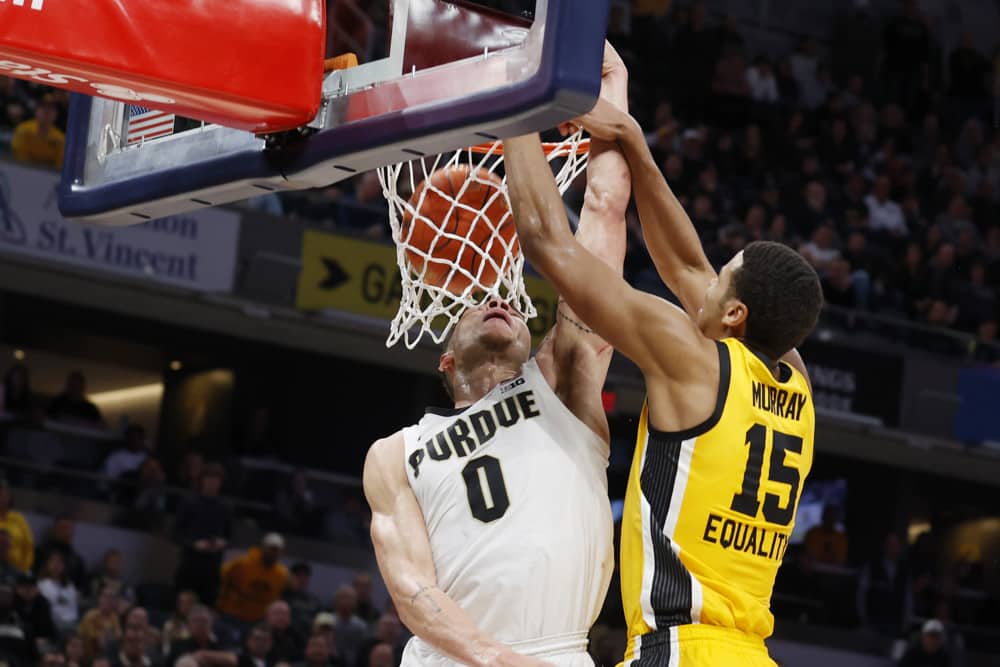 March Madness is upon us! While we are all furiously filling out our brackets and lining up bets for the opening day, don’t forget about College Basketball DFS during March Madness throughout the NCAA Tournament. What better way to add to the excitement than entering a few lineups and watching them get in the green?

As we roll through the opening weekend, allow me to be a guide in your CBB DFS endeavor. With an overwhelming 16 games on Thursday and Friday, I’ll break down each region from a DFS perspective. Listed below will be each team’s offensive and defensive rankings and each school’s Team Total line for the upcoming games. Then, we’ll highlight some high-dollar, middle-of-the-road, and bargain bin options.

One of the main matchups in this region, from a fantasy perspective, is UNC vs Marquette. Neither team is proficient and stopping opponents and Marquette is especially bad at rebounding (330th OR, 306th DR). That means my favorite high-dollar target is UNC’s big man Armando Bacot ($9.5K).  Bacot has been a beast all season – averaging almost 40 fantasy points per game. You’ll have to pay up but he should feast against the Golden Eagles on Thursday.

When looking for a mid-tier player to round out your roster, San Francisco’s starting SG Khalil Shabazz ($6.7K) looks appealing. Shabazz is the team’s second-leading scorer and regularly plays 35+ MPG. The Dons’ backcourt dominates the team’s field goal attempts and Shabazz has been north of 30 fantasy points five times in their last eight games. There’s a safe floor and a high ceiling at an affordable price.  Plus, it should be a tight game and Shabazz is a senior who will be laying it all on the line.

With so many attractive high-priced options, we’re going to have to roster a couple cheap guys in order to save some budget for the stars. When mining for a diamond in the rough, I try to find a guy who is guaranteed playing time. Kentucky’s Davion Mintz ($3.5K) has four straight games logging 20+ minutes as the top perimeter reserve for the Wildcats. His production has been inconsistent but Mintz is still averaging 15.5 fantasy points per game. This matchup has blowout potential which means potential extra minutes for backups. Plus, Mintz is another senior which will be a reoccurring theme in this column.

The South region only has two matchups on Thursday with the Michigan/Colorado State game as the more attractive option from a fantasy perspective. For my high-dollar guy from this region, look no further than Hunter Dickinson. The sophomore has put it all together during the 2nd half of the season and is primed to go off vs the undersized Rams (303rd tallest in the country). Dickinson opened his game up by including a 3pt shot in his repertoire which was on display vs Purdue when the big man shot 4-6 from deep. Colorado State struggles to defend and Michigan will feed their best player time and time again.

It’s a gamble taking any guy from Longwood but if you have the stomach, their second-leading scorer, Isaiah Wilkins ($6.8) might pay off. The Wake Forest transfer finished the Big South tourney averaging 16PPG and 9RPG over the three game stretch. He also went for 19 and 8 vs Iowa this season. There might be better plays in other regions but I’d expect low ownership on Wilkins.

For an attractive cheap guy, how about Tennessee’s John Fulkerson ($4,8K). The sixth-year senior has dealt with hip issues this season but he’s played 20+ minutes in each of the last three games. He’s now 100% and is a major cog in the Volunteer wheel when healthy. In the SEC Champ game, Fulkerson registered 8 points and 12 boards. I’d expect similar output against the undersized Lancers.

The best high-priced player in this region was a pretty easy choice. Iowa’s Keegan Murray has been absolutely crushing it this season. Over the last seven games, Murray hasn’t been south of 40 fantasy points. Recently, against Northwestern, the 6′-8″ sophomore put up a crazy 26-18-3-2-2 stat line that totaled 63 fantasy points. Trust me, Richmond and their 104th in the nation defense, hasn’t seen anything like Murray in the A-10 this season. I also expect the game to stay within arms reach so we shouldn’t have to worry about the game script.

I have the Providence/South Dakota St game in my crosshairs for excellent fantasy production. The Jackrabbits might have the worst defense of any team in this tournament so when I see Al Durham sitting at $5,8K, I look no further. The Indiana transfer has been a steady source for production in the Fryers backcourt this season. Durham plays the most minutes on the team and is their second-leading scorer while chipping in with 3 RPG and 3 APG.

While it’s wise to fade the South Dakota State defense, you might want to get a piece or two of their 12th best offense in the country. For the dirt-cheap price of only $4K, starting SG Charlie Easley looks appealing. The Jackrabbits have nine players who average over 15 minutes per game so Easley won’t be in the court the whole game but the sophomore has shot a remarkable 50.5% from 3 (48 of 95) this season. I like rolling the dice on a low price guy who could get hot.

When eyeing a high dollar guy out of this region, UConn’s trio of Adama Sanogo ($8.1K), Tyrese Martin ($7.3K), or RJ Cole ($6.8K) look very promising. Sanogo has the most upside and New Mexico State doesn’t have anyone on their roster that can hang with the 6’9″ 240lb Mali man. On the other hand, Tyrese Martin is the most consistent fantasy producer who comes in $800 cheaper. Over the last three games, Martin is averaging an astounding 39.1 fantasy points per game. Then there’s the wildcard – RJ Cole for an even cheaper dollar amount. Cole is the team’s leading scorer and can straight fill it up. I like all three but if I can only pick one, I’ll go with Tyrese Martin.

For my mid-tier guy in this region, I’m all about Arkansas’s Au’Diese Toney ($5.9K). First, it’s a juicy matchup vs a bad defense that won’t have the size to defend the 6’6″ Guard. Second, the Pitt transfer has only sat out a combined four minutes of court time over the last three games. During that stretch, he’s averaged over 19PPG while also being the team’s second-leading rebounder. At this price, Toney is a no-brainer.

Usually, rostering a player from a one-seed in the opening round is a bit of a question mark. The team could be up big and rest their starters a good chunk of the second half. However, at only $4K, Gonzaga’s Anton Watson has my attention. Watson is the Zags main reserve big man and he averages almost 20 minutes and 19.2 fantasy points per game. If Gonzaga is blowing out Georgia State, he could see even more floor time. In the two crucial games against St Mary’s and San Francisco in the WCC tourney, the junior put up respectable games with 16 and 27 fantasy points.