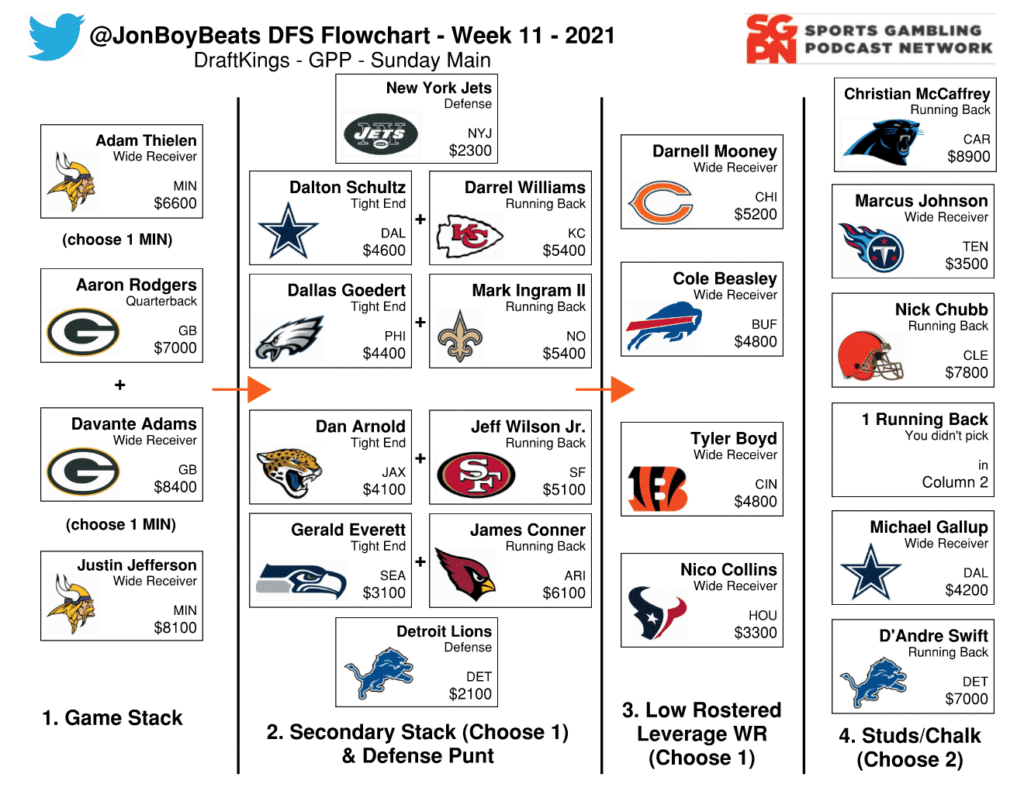 OH BABY! I have put together some wild versions of The Flowchart in the past, but I think this one might take the cake. It may look a bit overwhelming at first glance, but don’t worry I am going to be here to guide you along the path to success. I am not going to spend as much time waxing poetically about game theory and leverage this week. I’m just going to dive straight in to the nitty gritty and show you how to use the Week 11 Flowchart in the ways most likely to land you some success. Let’s get to it!

AJ Dillon is sure to be the most popular player on DraftKings this weekend. It makes a lot of sense, he’s $6200 and is immediately stepping into the role that Aaron Jones had. This is similar to Alexander Mattison when he steps up for Dalvin Cook. Smash Spot! If we are going to fade him (which we are), then the safest way to do it in my opinion is with direct leverage. That’s why I am firing up Aaron Rodgers and Davante Adams this week against the Vikings. If this is a Davante Adams alpha game, we will be looking good right from the start. I honestly don’t have a preference of Justin Jefferson and Adam Thielen this week. Typically, when I try to guess on one of these guys I am wrong, so I want to have some exposure to both of them. Just choose one for each lineup of The Flowchart.

The Tight End position straight up stinks. No one has been worse than me at picking TEs this season, so this week I’m pulling out all of the stops! If none of these four guys does well, I may as well just hang it up. You will notice that all of these TEs are paired with RBs from the opposing team. All of these RBs should be pretty popular this week, so I am trying to squeeze a little extra correlation in with them.

I normally don’t spend a lot of words on Defense, but it’s never a bad idea to play the Defense against one of the popular QBs this week. That’s why I loaded up on the Jets against Tua Tagovailoa and the Dolphins. The Lions don’t have a good defense but Baker has looked like hot garbage the past few weeks. Let’s toss a couple of picks here huh Mayfield?!

Finishing out the Flowchart

This week is a fun one because there are so many different options! The WRs in Column 3 all provide leverage off of some of the more popular players in their lineups, or just are generally underpriced compared to their projection. It gets a little bit tricky on filling in The Flowchart this week, so I am just going to fire off some different combinations that work for salary. I want to make sure things aren’t too confusing with this new format. Marcus Johnson and Michael Gallup are the keys to fitting in some more of the stud RBs in Column 4. If you don’t choose one of them, you might have to fill in with two other running backs from Column 2 rather than just 1. Keep in mind you also may need to change defenses up a bit to make all of these work.

I think that should be enough to help get you started. As you can see plenty of options! Good luck to all, I hope to see you atop the leaderboards this week.