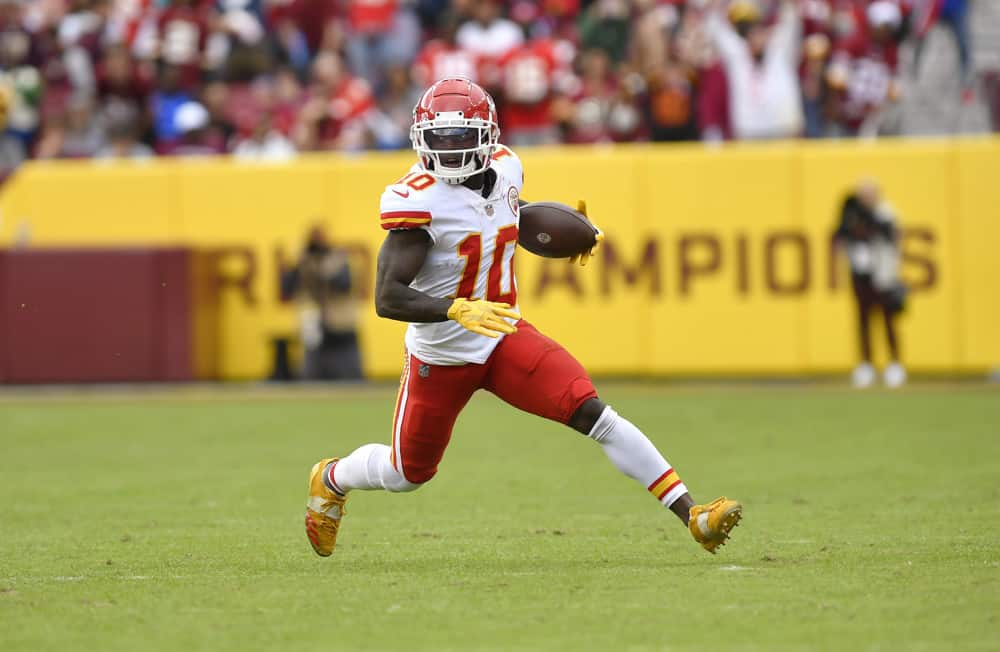 Welcome to the new top 10 weekly DFS stacks article where I will be breaking down the DraftKings main slate to identify my top 10 DFS stacks for Week 11. Stacks in DFS can be defined as; playing two or more players from the same team in a single lineup. Stacking in DFS contests has become the predominant roster construction strategy particularly for GPP tournaments, with a variety of unique and creative ways to build stacks and maximize your scoring upside each week. The most popular stacking options include the skinny stack, the double-stack, the run back stack, and the full-on game stack, and the running back paired with a defense stack.

Patrick Mahomes’s ($7,600) demise was greatly exaggerated. Last week he threw for five touchdowns and apparently is more back than he has ever been. Currently, he’s the second-highest scoring player on all of DraftKings, trailing only Cooper Kupp. His main weapon, Tyreek Hill ($8,200) ranks second in points scored for wide receivers and has scored 22 or more points in three of his last five performances. Hill has averaged 12 targets per game over that span and is only five targets behind Kupp with 111. Hill is Mahomes’s favorite target and should see plenty of volume in this high-scoring game. Vegas has the game Total at 55, the public bet it up to 56. If this game shoots, I want the best guns in the shootout.

The Dallas Cowboys offense has been the most successful this season when they have fed Ezekiel Elliott ($7,700), opening up the play-action passing lanes for the “Dak Attack.” Zeke is coming off of his fourth 20 plus point DraftKings performance last week. The Kansas City Chiefs have given up over 1,300 yards combined rushing and receiving to running backs so far this season. The Cowboys have a 74% run blocking advantage according to PFF, look for them to exploit the Chiefs on the ground all day long. Michael Gallup returned last week and caught three of his five targets, good for 7.2 DraftKings points. He’s the third passing option, but his $4,200 is $2,00 less than Cooper, which is a value for someone who should see 7-8 targets in this potential scorefest.

The Dallas Cowboys are averaging 433 yards and 31.6 points per game, good for first in the NFL in both categories. Dak Prescott’s ($7,200) return from injury along with the emergence of CeeDee Lamb ($7,600), and Zeke getting fed has vaulted the Cowboys to the offensive team to beat in the NFC. Michael Gallup returned last week which meant that Lamb ran more routes out of the slot. The results? He scored two touchdowns and finished the DraftKings WR3 with 28.6 points. Lamb ranks eighth this year, averaging 18.6 points per game, and is the most explosive weapon Dak has in his arsenal.

Tyreek Hill ($8,200) has the highest point potential of any skill position player on any given Sunday. He scored 40 points in Week 1 against Cleveland. Then, he went off for 50 points in Week 4 against the Eagles. I want all the Tyreek Hill run-back stacks this week in small and medium GPP field tournaments.

1st among all QBs 🎯 pic.twitter.com/PmvjgcqAqX

Aaron Jones is OUT for week 11, which means that it is finally A.J. Dillon Szn. For those not playing along at home, it’s a moment all A.J. Dillon truthers have been waiting for, his official coming-out party as the lead back for the Pack-Attack. Dillon’s $6,200 is a bargain given his projected usage in the Packers’ matchup against the Minnesota Vikings. RunTheSims.com has Dillon projected for 22 points and a 22% optimal rate. Dillon’s teammate Davante Adams ($8,400) has a very similar projection, 22 plus points, and a 14.7% optimal rate. PFF gives Adams its second-highest grade of the week against a Vikings secondary that has given up 10 touchdowns and over 1,600 receiving yards to wide receivers.

The Dalvin Cook ($8,200) run-back makes sense in a game that is projected for the third-highest total (49.5) on the main slate. Green Bay is only favored by 2.5 points, which means that Vegas expects this game to be a competitive, back and forth contest. Cook has scored over 18 points in five of seven performances this season and should see 22-26 touches this week. I’m comfortable playing this stack in mid-sized GPP fields.

Davante wears a 👑 on his head, but @AJDillon7's got one for his quads 😅 @Packers pic.twitter.com/jMcSfXqrdf

Josh Allen ($8,100) was back in Week 10, finishing as the second-highest scoring quarterback on the DraftKings main slate behind only Dak Prescott. This week Allen squares off with an Indianapolis Colts defense that gives up 20 and 40 points to quarterbacks and wide receivers respectfully. Or not so respectfully if you are a Colts fan. They haven’t been able to stop anyone, giving up 15 touchdowns to wide receivers, good for first or worst in the NFL depending on how you look at it. Stefon Diggs and Dawson Knox are licking their chops for this matchup. PFF giving Diggs the fourth-best matchup boosts his case for a breakout performance this week. The Colts rank 27th against the tight end, giving up over 16 points per game. Knox is a cheap lotto ticket in the Bills’ explosive offense. I will be playing this onslaught stack in larger GPP field tournaments.

According to RunTheSims.com, Lamar Jackson ($8,000) has the highest base projection of any quarterback this in Week 11. Jackson is coming off one of his worst performances of the year in Week 10, scoring only 16.4 points in the Ravens’ upset loss to the Miami Dolphins. He’s priced up $800 from his last main slate appearance, which should put enough folks off of him to make this game stack viable in all formats. Jackson’s favorite target in 2021 has been Marquise “Hollywood” Brown, who is averaging 18.8 DraftKings points per game. I love stacking Jackson with Brown, but understand if you want to pay down for Bateman at $4,500.

David Montgomery ($5,500) is criminally underpriced by DraftKings with week. I won’t tell them if you won’t. Let’s instead enjoy the discount and stack this run-back with Montgomery and call it a win. The Ravens give up 25 points per game to running backs, surrendering over 1,170 total yards and nine touchdowns through nine games. That’s good for us. Shhhh. Just take the stack and play it everywhere.

Cam Newton is back!! More importantly, though, DraftKings didn’t get the memo and still priced Cam down at $5,100. Homecoming revenge game. This is too easy. Cam is playing with Christian McCaffery (CMC) for those of us who remember his best days were spent with Cam in the backfield absorbing hits and taking all the punishment and pain. This of course left CMC to frolic and score at will, becoming the clear RB1 in the NFL. Hell!! It’s why he’s priced up $8,900 and we still pay to this day. I for one love this unconventional quarterback/running back stack and will be playing it in Cash and small GPP field tournaments.

Cam Newton on his first game back in Carolina coming against Ron Rivera: "I refuse for the narrative to be about 2 people when it's about 106 people."

Ryan Tannehill ($6,700) too is back! Okay, he never really went anywhere. Tannehill has scored over 18 points in three of four games, with a rushing touchdown in each. This week he faces the Houston Texans defense who gives up 19 points per game to quarterbacks. I’m stacking him with A.J. Brown ($7,700) this week. I’m not worried about the egg Brown laid last week in a tough matchup against the New Orleans Saints. According to PFF Brown has a top-five matchup this week against the Texans secondary. Brandin Cooks is priced at $6,000, making him one of the best values on the slate and a perfect run-back to complete our mini-game stack. I am going to be rolling with this stack in mid-sized to larger tournaments.

Players to pair with:

James Conner is  $6,100 and will be the lead running back this week against a Seattle Seahawks defense that ranks 31st in the NFL. Conner is in a smash spot with Chase Edmonds OUT for Week 11. Conner has the highest RunTheSims.com optimal rate for Week 11. Tyler Lockett is priced down to $6,000 this week after disappearing in Week 10 against the Green Bay Packers. Look for the Cardinals to sell out to stop D.K. Metcalf, leaving Lockett free for one-on-one matchups. Lockett did score 56 points against the Cards last year, so don’t be shocked if he goes off this week. I’m playing this stack in all types of contests.

Vegas is predicting points in the Bengals vs. Raiders game, close to 50 of them. Derek Carr ranks 11th in DraftKings scoring for quarterbacks, averaging 20.5 points per game and his $5,900 price makes him a tremendous value this week. Carr has loved him some Hunter Renfrow ($5,800) the last three weeks, targeting him 8.7 times per game in that span. Renfrow is averaging 16 fantasy points per game, picking up touchdowns in back-to-back games. Pairing them with Chase makes the most sense, but if you want to pay down you could also run it back with Tee Higgins who is priced at only $5,400 this week.

Joe Burrow ($6,600) is back from the bye and into a basic pick’em game with a 49.5 point total. Burrow has been putting up strong numbers this season, averaging 20.1 DraftKings points per game. His number one wide receiver has been LSU connection JaMarr Chase ($7,200), who is averaging 19.8 DraftKings points himself. The duo has been electric and makes for a great game stack in this potential lowkey shootout. Running it back with Hunter Renfrow ($5,800) makes sense from a game flow and value perspective. Darren Waller ($6,100) is reasonably priced and makes for high-upside play. I am comfortable playing this stack in larger field GPP tournaments.