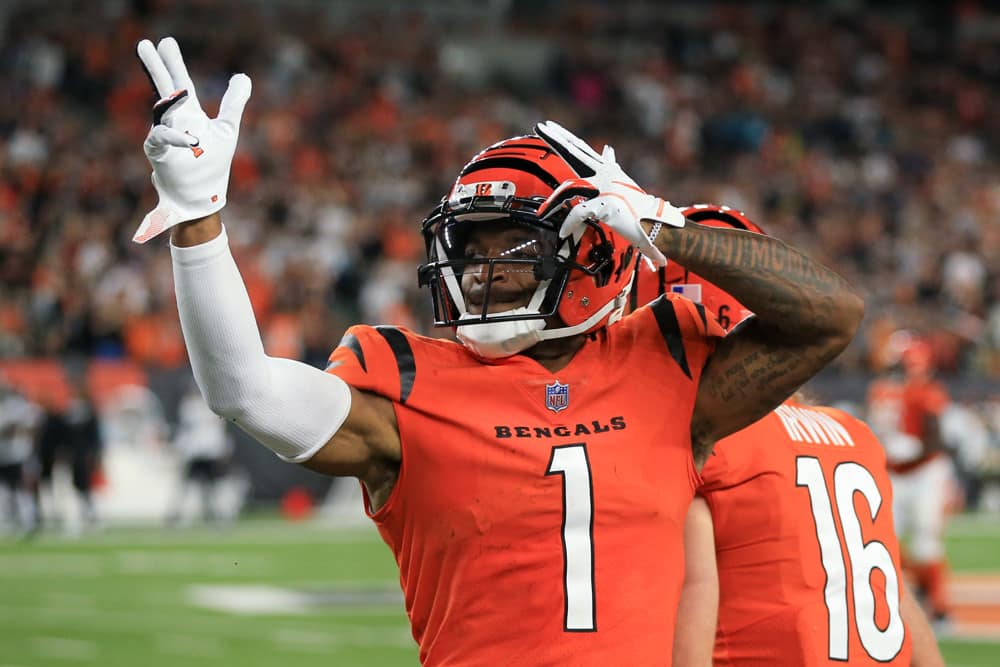 If you’re like me, and I know I am, you might always be looking for a good deal in your fantasy football dynasty league. Maybe you have extra depth at certain positions you don’t mind moving for up-and-coming players who aren’t getting the timeshare yet. For me personally, I just can’t help myself – I love the challenge of moving pieces around and trying to manage the best dynasty team at the best value. Maybe you like the challenge of rostering a bunch of younger players to wait for the explosion of points and then again trade them for a return on value. We’ve all been in a position where we aren’t going to make the playoffs so we decide to see what we can do to start building our dynasty team for next year. No matter what the reason, we are here to help.

So what goes into a dynasty trade value chart? A lot! While it takes into some similar things as the normal Fantasy Football Trade Value Chart I wrote about, it has some differences as well. The dynasty trade value chart takes into consideration FantasyPros best, worst, and average rankings, even factoring in some standard deviation. It also looks at average fantasy points and player age. Taking all that into consideration, running it all through some formulas, we are able to assign each player a trade value, that could help you start building for a better team, a better future, and a better you. Well…the first two anyways. Here is a look at each position.

While the fantasy football trade value chart slated Tom Brady in the top five, because of how age factors in the dynasty trade value chart we have a bunch of young guns at the top. Breaking down all the numbers Josh Allen actually has a higher best ranking on FantasyPros, but he has a lower worst ranking, pulling him slightly down into second behind Patrick Mahomes. The Chiefs locked up their QB for years to come and there’s no reason you shouldn’t as well. Behind Josh Allen slightly are Kyler Murray, Lamar Jackson, and Justin Herbert. There are a bunch of young guns at the top and the middle, even though they aren’t currently performing as well as some of the veterans. This gives you a perfect opportunity to plan for the future by potentially trading your current higher production quarterback for a lower producing but up and coming quarterback.

Ironically three of the top running backs on the dynasty trade value chart, Christian McCaffrey, Saquon Barkley, and Dalvin Cook are fighting injuries, which means you may be able to trade for them if the current manager is frustrated with the injuries. While we saw Derrick Henry as the number one ranked running back on a redraft/rest of season fantasy football trade value chart he drops to sixth in dynasty due to his age and the wear and tear from carrying the ball so many times. Jonathan Taylor is tied for third on the list with Dalvin Cook and the value after those top four drastically drops due to factors such as age or production. Using the dynasty trade value chart maybe you can move a player you are down on and ready to move on from for somebody you can start building your dynasty team around.

Jonathan Taylor is a stud. Takes a screen 76 yards for the opening score on Monday Night football. #Badgers pic.twitter.com/5laeussMiQ

It’s no surprise to me that Justin Jefferson tops the wide receiver dynasty trade value chart. In his second year, Jefferson has picked up right where he left off his rookie season and is putting up great numbers. He’s a great example of using the chart to find good value early last year to having the top player in their position this year. Tyreek Hill is close behind and CeeDee Lamb, D.K. Metcalf and Davante Adams are all tied for 3rd. This is a good example of the chart factoring in age as A.J. Brown’s average fantasy points have been quite a bit lower than the players above him but at the age of 24, he has major upside for years to come and therefore gets a higher trade value.

The first to be at the top of their position in both the rest of season fantasy football trade value chart and the dynasty trade value chart, Travis Kelce tops the list by quite a bit. He’s also the oldest player in the top tier of their own position. Though battling an injury the upside George Kittle brings slots him in number two though he really could be interchangeable with Darren Waller. The youngest player in the top 10 tight ends, Kyle Pitts is putting up decent stats with 14.1 points per game in a PPR league at the age of only 21. I sort of remember being 21, that invincible feeling that you could stay young forever, but I digress. Pitts has exceptional value at his young age and is an excellent piece in your dynasty team.

Lastly, looking at a dynasty value among the rookies on the Dynasty Trade Value Chart is an interesting way of gauging what new guys in the league might help you out for years to come. Najee Harris, the 23-year-old running back who is averaging 15.4 points per game in a PPR league shows that rookie or veteran, the running back position remains vital to your fantasy football team. Ja’Marr Chase, a guy nobody thought was ready coming into the preseason, has outperformed expectations and slotted him as the second-best valued rookie. After those two the trade value takes a big jump down to Javonte Williams, Devonta Smith and then Jaylen Waddle.

That’s a look at the Dynasty Trade Value Chart. Hopefully, it can help you become the best dynasty manager in your league as you continue to navigate between big names and numbers to best value names and numbers.