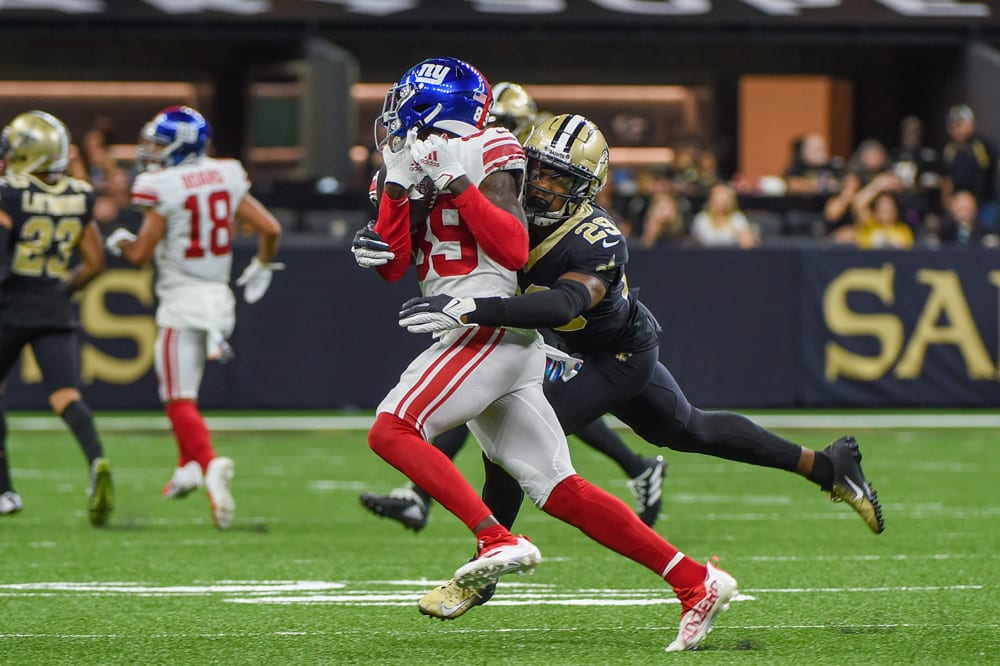 For the first time this fantasy football season we have entered the realm that will test all fantasy football managers—bye weeks. With four teams on a bye, fantasy managers will have to service the waiver wire for replacements. Let’s dive into some players that can serve as one week fill-ins or even longer.

When the New York Giants drafted Kadarius Toney, he was considered to be a gadget player and slotted into fourth on the depth chart. Well, after a slew of injuries, Toney has emerged into a starting role for the Giants offense. With Sterling Shepard and Darius Slayton sidelined for two weeks, Toney is averaging double digit fantasy points in most formats. Now with Kenny Golladay possibly sidelined as well, Toney could be in for a nice day against the Los Angeles Rams who are giving up the fourth-most fantasy points to the position.

It was an extremely rough day for the Giants as Saquon Barkley went down with a nasty ankle injury. There should be more information as the week goes on, but from initial glance he will not be able to suit up on Sunday. Thus, opening the door for Devontae Booker. Booker stepped into the role and found his way into the endzone twice vs Dallas. As the lead back, he should continue to find ways to be productive while Barkley is out.

This is not the first time that Tim Patrick has gotten an opportunity to be fantasy football relevant due to injury. Last year it was Courtland Sutton, this year it is Jerry Jeudy and KJ Hamler. It is actually shocking how low Patrick’s roster percentage is given his production this season. He is currently the WR38 in PPR formats with four games of double-digit fantasy points. Patrick is a big red zone target and will bring fantasy value until the return of Jeudy.

For those fantasy managers that rostered Kyler Murray, Taylor Heinicke might be the one week fill in off the waiver wire that can give solid production this week. Heinicke is going to get the Kansas City Chiefs who are giving up the fifth-most fantasy points to the position. Heinicke also has three games of over 20 fantasy points. His threat as a rusher adds to his value and against a soft Chiefs defense. He should be able to have a nice day for fantasy in Week 6.

As a bye week fill in, Jalen Reagor has a plus matchup vs the Tampa Bay Buccaneers. With the injuries in that secondary, the Bucs are giving up third-most fantasy points to wide receivers. Reagor has great speed on the outside and proven the ability to get behind the defense. While his production has not shown it (partially due to a couple touchdowns being called back), Reagor is the WR2 in that offense and will get the opportunity to produce. He should have a nice day as the Philadelphia Eagles are going to be playing catch up with that high powered Bucs’ offense.

No seriously guys. Why does Rondale Moore qualify for this column? A receiver in a Kyler Murray led offense is going to have fantasy value. Especially Moore who is only going to get better as the year goes on. He was a rookie wide receiver that was highly touted coming out of college and he is not letting his place on the depth chart slow him down. Even with the Cardinals on a bye this week, pick up Moore and stash him before he becomes a more consistent fantasy option.

How did Rondale Moore make this grab? 😳

The degenerate football lovers that loved XFL football are losing their minds over Donald Parham Jr. The former XFL legend is coming off of back-to-back weeks with a touchdown. The 6’8 TE is a huge red zone option and should start to consistently get looks when the Los Angeles Chargers get in close. In fantasy football, the tight end position can be a wasteland. Anybody with touchdown upside on the waiver wire should be considered as a one-week fill-in. Parham gets a good matchup with the Baltimore Ravens who are conceding the most fantasy points to tight ends and second most touchdowns.