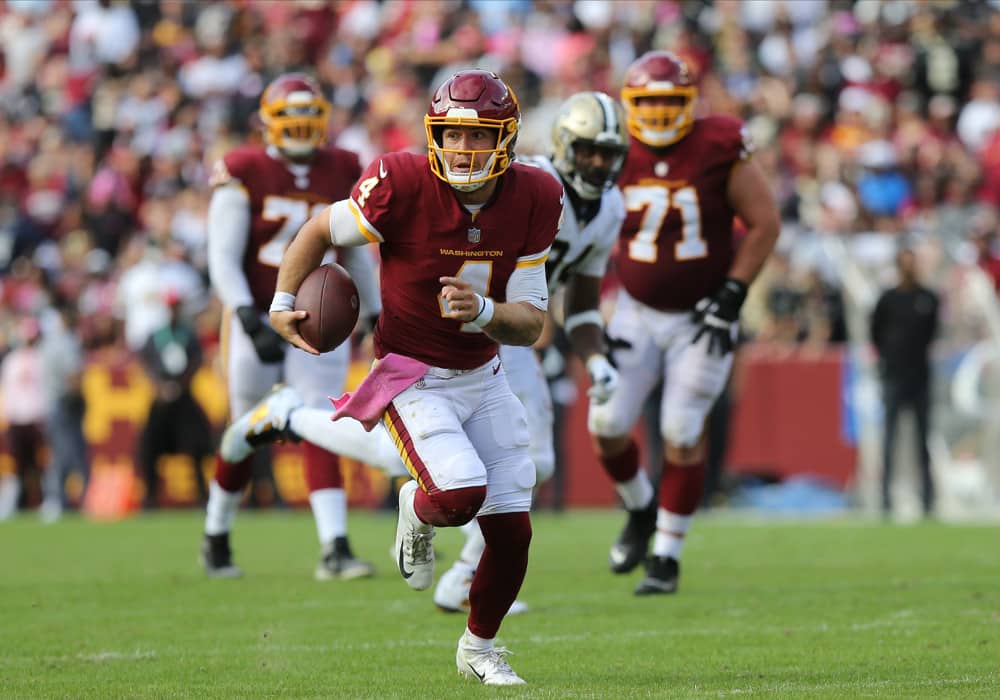 With five weeks of the NFL season in the books, there is still time to improve your team. Depth charts are constantly changing and injuries continue to pile up which has created added fantasy value for several players. However, it is challenging for fantasy football managers to know how much they should be bidding within the FAAB system. This article will be a guide about which players to target for Week 6 as your league’s FAAB and waiver wires run.

If you are looking for a temporary RB2, then you should be targeting Devontae Booker. After barely being utilized for the first month, Booker suddenly received a ton of playing time due to injuries on the depth chart. Saquon Barkley suffered an ankle sprain against Dallas and will be out for 2-4 weeks. In his absence, Booker recorded 58 total yards and two touchdowns. While Booker might not be the most talented running back in the league, he will automatically possess value due to his projected volume over the next month.

After being a nonfactor for the first three weeks, Kadarius Toney is finally making the most of his playing time. In Week 4, Toney recorded nine receptions for 78 receiving yards against New Orleans. However, that was nothing compared to his Week 5 performance against Dallas. In that game, he recorded ten receptions for 189 receiving yards. Due to his elite production, it is safe to assume that he will continue receiving playing time after Sterling Shepard and Darius Slayton inevitably return. However, he did suffer an ankle/foot injury so he might be unavailable for the Week 6 game against Los Angeles.

Most by any rookie WR this season. I ❤️ Yung Joka pic.twitter.com/f75gNxgUR5

After having a stellar preseason, Marquez Callaway was surprisingly quiet for the first two weeks of the regular season. However, that quickly changed as he has recorded 15 receptions for 200 receiving yards and three touchdowns over the past three weeks. He also already has a ton of chemistry with quarterback Jameis Winston which should result in a consistent amount of targets downfield moving forward. While Callaway will never record many receptions in any given game, his big-play ability still gives him significant fantasy value.

Despite a lack of production this season, Darrel Williams should be receiving added playing time in the near future. In Week 5, starting running back Clyde Edwards-Helaire suffered an MCL sprain which will sideline him for several weeks. As a result, Williams will be the temporary starting running back on one of the best offenses in the league. In addition to having two rushing touchdowns this season, Williams is an underrated receiver out of the backfield so he should be extremely productive in PPR formats.

Back to back touchdown drives #Chiefs takes the lead, just like that.

As a sixth-round draft pick, Khalil Herbert was not expected to receive much playing time for the Chicago Bears this season. However, that quickly changed once David Montgomery suffered a knee injury two weeks ago. As a result, he is now part of a running back committee with Damien Williams. Last week, Herbert had a team-high 18 carries for a team-high 75 rushing yards. Surprisingly, he also received 53% of the snaps so the coaching staff clearly likes his skillset.

CHI got some movement off the ball vs. LV.

After missing the last two weeks, Preston Williams returned to Miami’s active roster and put together a quality performance. Williams was on the field for 74% of the snaps as he benefited from DeVante Parker‘s hamstring injury. In Week 5, Williams had five receptions for 60 yards. Now, Miami has the luxury of facing Jacksonville’s defense which is allowing 286.6 passing yards per game. As a result, I expect Williams to be a fantasy sleeper in Week 6.

The tight end position is extremely unpredictable besides the top few options so taking a flyer on Ricky Seals-Jones makes sense. After Logan Thomas was placed on IR due to a hamstring injury, Ricky Seals-Jones became the starting tight end. Despite only recording 41 receiving yards, he was still on the field for 99% of the offensive snaps. With that amount of volume, he is definitely a high-upside play against the Chiefs.

Taylor Heinicke could not have placed this ball any better. And what a grab by RIcky Seals-Jones. This game has been awesome.

If you are looking for an extremely cheap running back than Samaje Perine might be an interesting option. Last week, Perine recorded 83 total yards and a touchdown against the Packers. However, he was on the field for a season-high 61% of the offensive snaps so last week’s success might not be sustainable. The main reason for the sudden boost in playing time was the ankle injury that starting running back Joe Mixon was dealing with. If Cincinnati does not want to push Mixon too hard next week, then Perine might be a sneaky play. However, he was placed on the reserve/COVID-19 list yesterday so keep tabs on his status throughout the next few days. Perine could be a great scoop with your Week 6 FAAB.

If you want to add a quarterback that will not cost you anything, then acquiring Jacoby Brissett makes sense. Despite being a below-average NFL quarterback, he is still capable of exploiting a terrible defense so this Week 6 matchup against Jacksonville is quite juicy. Miami is only averaging 70.4 rushing yards per game which are the fewest in the league so one can expect the Dolphins to air it out a bit against this awful secondary on Sunday. Plus, Brissett has mobility so he is able to pick up rushing yards if a passing play breaks down.

After barely playing in the first four games of the regular season, Chris Moore had a great performance against New England. Last week, Moore had five receptions for 109 receiving yards and one touchdown. Plus, he only played 63% of the offensive snaps so there is still room for more playing time in the future. While it is tough to trust a rookie quarterback behind center, Houston has several garbage time opportunities this season which will help Moore pad his statistics.

If you are streaming defenses, then Green Bay Defense is a solid choice for Week 6. Even though Chicago has won each of its last two games, its offense has only scored a combined 44 points. Plus, Justin Fields has struggled in the passing game as he only recorded 111 passing yards last week. Plus, Green Bay recorded three sacks against Cincinnati so it should be able to generate consistent pressure on Sunday.

Joe Burrow with a horrible interception in OT…

Despite only recording 12 receptions this season, Deonte Harris has a team-high 236 receiving yards and two touchdowns. While Harris would receive some attention on the waiver wire in most weeks, New Orleans has a bye in Week 6 so you could get him extremely cheap this week for later use. If you are desperate for wide receiver depth but are a bit low on budget, then Harris needs to be added.

If you are looking for a cheap tight end, then Dan Arnold is a fantastic option. Jacksonville traded a former first-round pick in order to acquire him so expect him to be heavily involved in the offense. Last week, Arnold had six receptions for 64 receiving yards. Plus, Jacksonville is the worst team in the league so garbage time should lead to more pass-happy game scripts.

If you want a cheap wide receiver in a quality offense, then Donovan Peoples-Jones is a solid option. Last week, he had five receptions for 70 receiving yards. Plus, he was on the field for 68% of the offensive snaps which ranked second among Cleveland’s wide receivers.