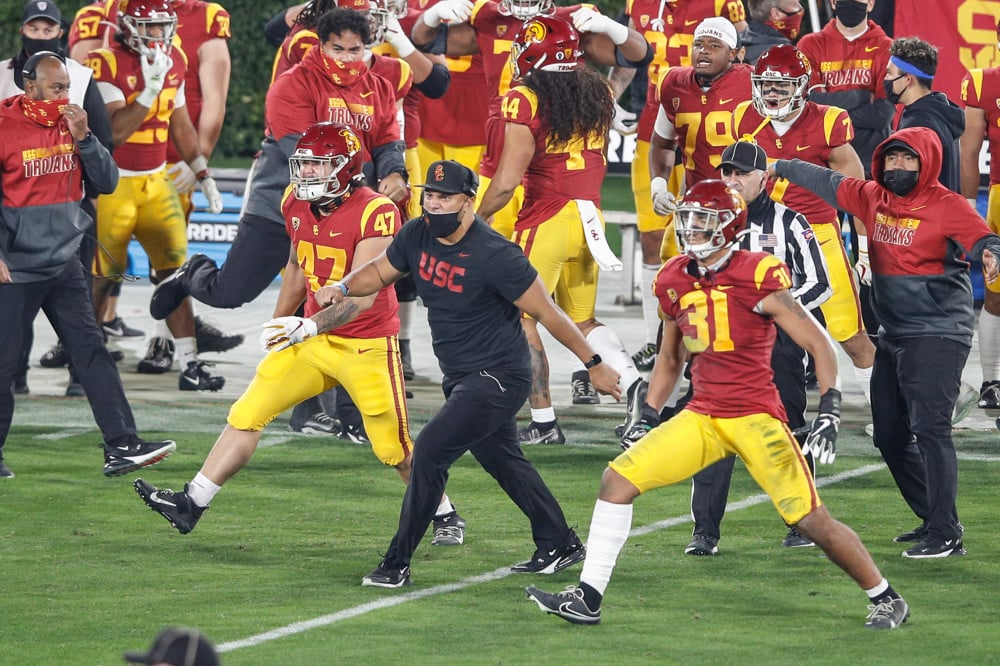 We’re going conference by conference looking at each team’s win total for the upcoming college football season and it’s PAC 12 time. While the conference may not have any elite teams, it’s a very deep league filled with quality football programs. Both the South and North divisional races are wide open so expect carnage along the way. Let’s start by reviewing the South.

As good as the Sun Devils might be this year, they could potentially drop all four conference road games. Away games at Utah and at Washington are two of the toughest trips in the conference. UCLA in LA will be very challenging and don’t overlook a tricky trip to Corvallis in November. It’s the second of back-to-back away games and the elements might come into play that late in the season.

Breaking down the ASU offense, there’s a lot of positives. That starts with returning QB Jayden Daniels and four of five offensive linemen that paved the way for the conference’s best rushing attack in 2020. WR Frank Darby is now in the NFL but almost every other skill position guy returns and there are quality transfers coming in.

No one does it better@JayD__5 was named to the @WalterCampFF Player of the Year watch list pic.twitter.com/zUueUbUoIT

While the offense leads the team, the defense is no slouch either. The majority of last year’s unit returns and there’s potential NFL prospects on the D Line and in the secondary. Even in losses last year to high power offenses like USC and Utah, the Sun Devil D still limited both to less than 30.

Arizona St only went 2-2 a season ago but Herm Edwards’s first two seasons in Tempe both resulted in 7-5 regular seasons. With the depth of the PAC 12 and the difficulty of Arizona State’s schedule, 7-5 or possibly 8-4 seems like the ceiling. I’m on the Under.

Clay Helton has managed to win just enough games to keep his job over the last six years at USC. The Trojans managed double-digit win seasons in 2016 and 2017 but disappointing 5-7 and 8-5 campaigns followed. Even with a 5-1 record last year, Helton’s seat has stayed warm.

QB Kedon Slovis returns and is entering his 3rd year as a starter for the Trojans. He’s due for a huge year and should be considered a Heisman candidate. A couple of WR’s from last year’s squad are now in the NFL and two RB’s transferred but don’t worry about the skill positions. Drake London will be one of the best receivers in the conference and look for Colorado transfer KD Nixon to start opposite London.  At running back, Vavae Malepeai returns and Keontay Ingram transfers in from Texas. More importantly, blocking for these guys will be four returning offensive linemen.

Defensively, an outstanding secondary will have to make up for a lot of moving pieces in the front seven. Graduation and transfers have hit the LB and DL units hard and while USC has talent at those positions, they’ll be inexperienced. For a team that finished third-best in Points Allowed last year in the PAC12, we might see them fall to the middle of the pack this year.

Looking at the schedule, even though USC should be the favorite in each of the first five games this year, it’s still a challenging slate. I could see troubles at Wazzu or at Colorado. Other difficult road games include trips to Notre Dame, Cal, and Arizona State.

Without much separation between PAC 12 teams, there will be a lot of carnage within the league. This will lead to several  7-5 and 8-4 teams and very few 9-3 and 10-2 squads. Plus, USC was fortunate to win a handful of close games last year. Usually the “luck factor” doesn’t carry over from one season to another.

When Chip Kelly was hired at UCLA, most Bruins fans thought immediate success was a foregone conclusion. After all, Kelly went 46-7 in four years at Oregon, including a trip to the national championship in 2010. Well, it’s not easy to win college football games. So far at UCLA, Kelly only has a 10-21 record through three seasons.

In his defense, last year was crazy as the team dealt with injuries and COVID issues. They ended the season with a 3-4 record with the four losses by a combined 15 points. Plus, QB Dorian Thompson-Robinson missed three games due to injuries. The difference between winning and losing is a fine line and this team was close to having a much more successful season.

DTR and nine other starters are back for an offense that averaged 35.4 points per game (2nd in the Pac 12). Even with Demetric Felton departing, the backfield is loaded with playmakers like Brittan Brown and Michigan-transfer, Zach Charbonnet. UCLA also has a fine group of pass-catchers led by WR Kyle Phillips. Lastly, all five starting offensive linemen return. There’s absolutely no reason why UCLA shouldn’t have one of the best offenses in America.

Last year, the defense could only finish as a middle-of-the-pack unit in the PAC 12. In the four losses, the UCLA D gave up over 44 points a game while only allowing 12 points per game in the three wins. As bad as the defense was in the defeats, they still led the conference in sacks and interceptions. With the majority of the defense returning, the talent and experience are there. I expect a more cohesive unit and more consistent production this season.

While I’m high on UCLA this year, the schedule is brutal. First off, you can’t slip up out of conference vs Hawaii or Fresno. Second, a win over LSU in Week 1 could really propel this team forward. LSU will be favored but UCLA is at home and they get a warm-up vs Hawaii in Week Zero.

Within the league, the Bruins, unfortunately, miss out on playing Wazzu and Oregon St (arguably the worst teams) from the North. Away games at Washington and Utah are rough and the rivalry game vs USC is also on the road. I’m not sure how they are going to pull it off but I have UCLA going 8-4 and hitting the Over. They’re just too good to be .500.

On at least a national scale, Karl Dorrell did not get enough credit for his first year in Boulder. The former UCLA coach led the Buffaloes to a 4-1 regular season before dropping the Bowl Game to Texas. Perhaps more impressive, Colorado did this with a DB-turned-QB in Sam Noyer.

Noyer has since transferred and while I admired his toughness, throwing the football down the field was not his forte. The Colorado passing attack should be in better hands with Brendon Lewis or Tennessee-transfer JT Shrout. With how dominant the ground game was last year, if the Buffs can get things going through the air, the offense might be unstoppable.

The offensive line gets four starters back who will lead the way for dynamic RB, Jarek Broussard. Even with some departures at wideout, look out for  Dimitri Stanley and La’Vontae Shenault to have big seasons. There’s a lot to like about the Buff offense entering the year.

On defense, nine starters return to a unit that should be decent. The Colorado D was inconsistent last year, giving up too many points to UCLA, Utah, and Texas but shutting down teams like San Diego State and Arizona. The second year in a new system will benefit the defense but the unit might lack top-notch talent when compared to some other PAC 12 schools.

With a low win total only sitting at 4.5, Colorado isn’t getting much love from Vegas. Playing both Texas A&M and Minnesota out of conference may be main reasons why. Even if the Buffs drop both games, there’s still a path to at least a .500 record and a bowl berth. In fact, Karl Dorrell has never coached a team that didn’t at least have an even record and make a bowl. I’m on the Over.

Going winless and losing to your in-state rival 70-7 to end the season will get you fired and that’s exactly what happened to Kevin Sumlin. After a career mostly in the NFL, Jedd Fisch will be the new head honcho in Tucson. It’s his first job as a head coach anywhere and the rebuilding process will be a challenging one.

At this point, I’m not sure anyone knows who will start at QB. There’s last year’s backup, Will Plummer, and there are Wazzu and USF transfers coming in. Whoever gets the nod under center will be working with an OL that needs to replace two starters and a group of skill position players that have been depleted by transfers and graduation.

The hire of Don Brown as DC should pay dividends but it’ll take some time to improve a unit that gave up almost 40 points a game a season ago. There’s a decent amount of experience returning and Fisch has been active in the transfer portal but it’s hard to see a big leap happen this season.

Looking at the schedule, it appears that Arizona will be favored in only one game (vs No Az). The Pac 12 is loaded with quality teams and the other out-of-conference games are against BYU and San Diego State. Additionally, Getting both Oregon and Washington from the North certainly doesn’t help. This is a complete overhaul situation in Tucson that will take time.  I’m on the Under

As if Utah didn’t have enough road trips within the conference, they scheduled back-to-back away games at BYU and at San Diego St. You aren’t going to find any other Power 5 teams doing that to themselves.

Thankfully, the conference schedule is pretty favorable. They miss out on Washington from the North and with the exception of the trip to USC, all of their tougher matchups are in Salt Lake City. For a team with conference championship aspirations, the schedule sure seems to break their way.

“We have a huge home-field advantage at Utah” @UtahCoachWhitt

We agree with the man and can’t wait to see you all on Sept. 2nd ‼️ #GoUtes pic.twitter.com/i3IGvZdqUK

If the Utes are going to make noise in the South, they need Baylor-transfer Charlie Brewer to win the QB job and lead the team. While Brewer was a solid QB in the Big 12, he never overly impressed. Assisting him and the skill position players will be an offensive line that returns all five guys and might be the best unit in the PAC-12.

The wide receivers and running backs positions lost some players to the transfer portal and leading rusher and future star, Ty Jordan, very sadly passed away. Without Jordan, expect Oklahoma-transfer TJ Pledger to spearhead the run game. Overall, there’s a lot of moving pieces but the offensive line will greatly help the transition.

While the O gets acclimated to each other, the defense at Utah under Whittingham has always been strong. Expect more of the same in 2021 as the defense returns a boatload of experience and talent. The secondary will need to tighten up some things from last year but the front seven should be excellent.

While Utah will be in contention for the South, I expect a lot of carnage from everyone not named Arizona. It will be tough for teams like Utah to separate themselves from the pack. Especially with a question mark at QB, I’m on the under. An 8-4 final record sounds about right especially if they unexpectedly drop an out-of-conference road game.