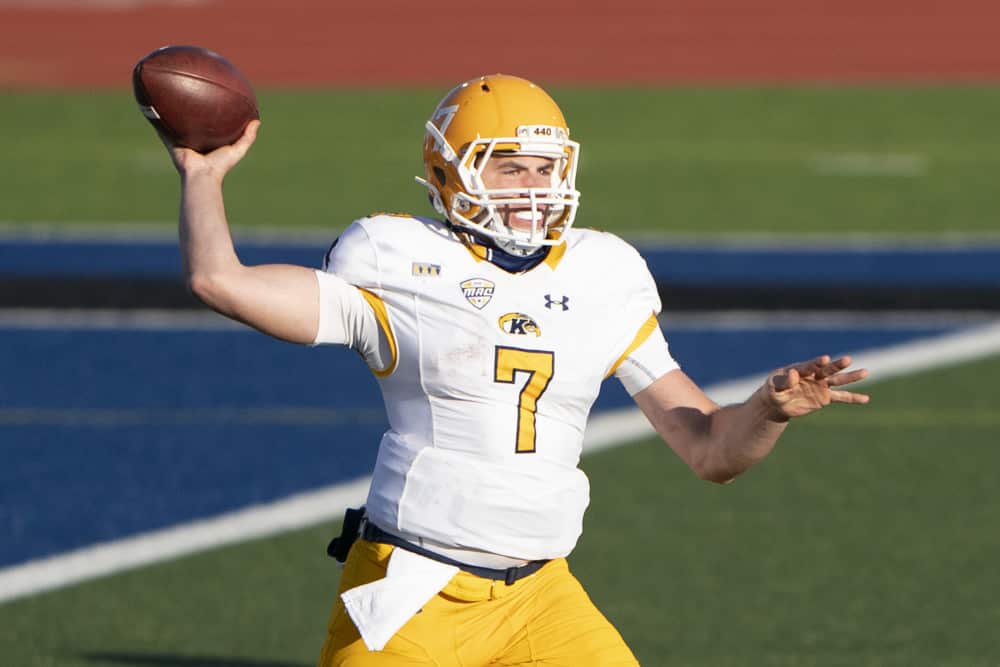 The countdown to the return of college football is on. As usual, we’ll have all kinds of content coming your way as the season nears. Just recently, NCAAF team win totals were released on most sportsbooks. Over the next couple of months, we’ll conference by conference discussing the Overs/Unders for each team and the plays I like the most.

Let’s start with the MAC Conference. Although it’s arguably the worst FBS conference, who doesn’t love some Maction? Let’s do this!!

The Golden Flashes were a surprise team last year, going 3-1 including blowout wins vs Akron and Bowling Green. The solid 2020 season came on the heels of closing out 2019 with 4 straight wins including a bowl game victory over Jordan Love and Utah State. HC Sean Lewis has quickly turned around this program and is entering his 4th season at only 35 years of age. Remember his name as he should get a bigger job soon.

The schedule is a little tough with out-of-conference road trips at Texas A&M, Iowa and Maryland but they should handle VMI. Things get easier in-conference as Kent State plays the three worst MAC teams (Akron, BG, and No Ill). They’ll win at least a couple more to clear the Over with ease. Look for a big year from SR QB Dustin Crum and Syracuse transfer, Nykiem Johnson, at wideout.

It was a small sample size but Miami was impressive in 2020, finishing the season 2-1. HC Chuck Martin has built a solid program in Oxford and has reached at least 5 wins in four straight seasons (last year not counting). QB Brett Gabbert (Blaine’s bro) returns as does the majority of a solid defense.

Out-of-conference road trips at Minnesota, at Cincinnati, and at Army will most likely result in three L’s. However, conference play is very manageable. I expect Miami to reach five wins at the minimum, with the possibility of six and a bowl berth within reach.

Northern Illinois was 0-6 a year ago but the team total surprisingly sits at a relatively high number of 3.5. If the Huskies are going to even sniff the Over, they better beat Wyoming at home and go 2-2 in the non-con. In conference, they’ll be favorites to beat Bowling Green but underdogs in the rest. I just don’t see four wins on this schedule even if they can incrementally improve on the abysmal season a year ago.

I had penciled Buffalo in as my MAC champion before HC Lance Leipold left for Kansas in late April. His departure is certainly a setback but the Bulls still have one of the best rosters in the conference. They are led by redshirt SR QB Kyle Vantrease and SR RB Kevin Marks JR is ready to make people forget about Jaret Patterson.  See the highlights for yourself.

Along with some key returners, the Bulls are fortunate to land a favorable schedule this year. Out-of-conference games at Nebraska and home vs Coastal Carolina will be tough but Buffalo should have zero problems with Wagner and at Old Dominion. They also land the three worst teams in the MAC (Akron, Bowling Green, and Northern Illinois). That’s a solid base of 5 easy W’s. In order to hit the Over, they’ll need to win four out of five vs Western Mich, at Kent State, vs Ohio, at Miami OH, and at Ball State. I say they drop at least two of those.

This Zip team was bad last year. Not Bowling Green or Northern Illinois bad, but they only went 1-5 with the lone victory being over the aforementioned Bowling Green. To make matters worse, the losses were all by two touchdowns or more. You can’t blame COVID either, the Zips were worse in 2019, going 0-12.

The good news, I suppose, is they return 86% of their team from a year ago (which is 23rd highest in the country) including QB Zach Gibson. They also welcome Michigan State transfer Anthony Williams at RB. They have very winnable games against Bowling Green and Bryant and I think they’ll get both. Now, where does the third win come from?

Ball State put it all together a year ago, going 5-1, winning the MAC, and beating San Jose State (who had several starters sitting out) in a bowl game. They lost their first game to Miami OH before winning the remaining seven. Redshirt senior QB Drew Plitt returns after throwing for 270 yards per game with 17 touchdowns to only 6 interceptions. Also returning is most of a good offensive line and above-average defense. This team is rock solid.

With that said, the Cardinals have a tough 2021 schedule to navigate. Out of conference, Ball State has road games at Penn St and at Wyoming with home games vs Army and Western Illinois. Even as the reigning MAC Conference Champion, 2-2 might be a best-case scenario. If that’s the case entering conference play, they’d have to go 7-1 to hit the over. Their toughest matchups (Toledo and Buffalo) are at home but is Ball State really that good? Everything has to go right to have a 9-3 season and that’s a bit much to ask.

The 76-year-old HC Frank Solich has transformed Ohio into a model of consistency. Due to COVID, The Bobcats only played 3 games in 2020 but prior to that, the school has been .500 or above for 11 straight seasons. They’ve also won more than 6.5 games for five years running.

At QB, Kurtis Rourke should be much better in his second year as the starter while RB De’Montre Tuggle will be the focal point. Good luck slowing him and this rushing game down.

Out of conference, they’ll knock off Duquesne but the others are home vs Syracuse and road trips at Louisiana and Northwestern.  It’ll be tough but I’ll say Ohio surprises someone and goes 2-2. The conference road games are at Akron, Bowling Green, Eastern Michigan, and Buffalo. Anything less than two wins there and it’ll be a major disappointment. Home games vs Central Michigan, Kent State, Miami OH, and Toledo round out the schedule. The Bobcats will at least get to seven.

With Lance Leipold leaving Buffalo, the best team in the MAC Conference might be the Toledo Rockets. A team that went 4-2 a season ago returns 98% of their roster which ranks highest in the country.

Norfolk St and Umass should be gimme W’s out of conference while a home game vs Colorado St is winnable. If the Rockets fall to the Rams and go 2-2 outside of the league, they can only afford one more loss to hit the Over. An 8-4 season seems to be right on the number but there’s a better chance of reaching nine than only seven.

Tim Lester had no easy task taking over for PJ Fleck back in 2017, but he’s been able to keep the program afloat. 6-6 in his first year was followed by back-to-back 7-6 seasons before going 4-2 in 2020. The offense will be explosive again with QB Kaleb Eleby returning but the Broncos need to get more from their D in order to compete for a MAC title.  Maybe he is the most underrated QB in the country.

Either way, six wins from this squad should be attainable even if they enter conference play at 1-3 (Michigan, Pitt, SJ St, and Illinois St are the out of conference games). While I feel like a push may be the inevitable outcome, I’m leaning Over.

The Falcons were the worst team in the worst conference a season ago. Not only did they go winless but they lost by an average point differential of 33.6. They also only return 72% of the team which ranks 89th in the country. Scot Loeffler is entering his 3rd year as HC and the team needs to show improvement ASAP. It’s possible the Syracuse transfer Drew Gunther can improve the QB position but this team has more holes than just the signal-caller.

In order for this team to get multiple wins, they need to beat Murray State of the FCS level, and either Akron or Northern Illinois in the MAC. I can’t put my money behind that.

He may have flamed out as HC at Florida, but don’t forget the job Jim McElwain did previously at Colorado St. At Central Michigan, McElwain went 8-6 in year one and 3-3 in 2020. He’s got the program heading in the right direction and welcomes a former prize recruit from Washington in transfer QB Jacob Sirmon.

At Mizzou and at LSU are paycheck games that’ll put CMU in an 0-2 hole. They’ll need to beat Robert Morris and Florida Int’l if they have any chance at the Over. The in-conference slate is also tough with no gimmes vs Akron or Bowling Green to be found. The Chippewas will be a good team this year but their record may not indicate as much. I’m looking at a solid 6-6 season on the horizon.

The Eagles return over 90% of their roster and bring in Cincy QB transfer Ben Bryant who should start immediately. The defense brings back 10 of 11 starters but it’s a D that finished last in the conference a season ago.

After only going 2-4 in 2020, the knee-jerk reaction may be to go with the Under and move on. Well, not so fast. Eastern Michigan has 3 winnable nonconference games which could build a nice base of W’s which would just leave a .500 conference record to hit the Over. HC Chris Creighton and this very experienced squad will turn some heads this year and surprise a few higher-ranked teams.