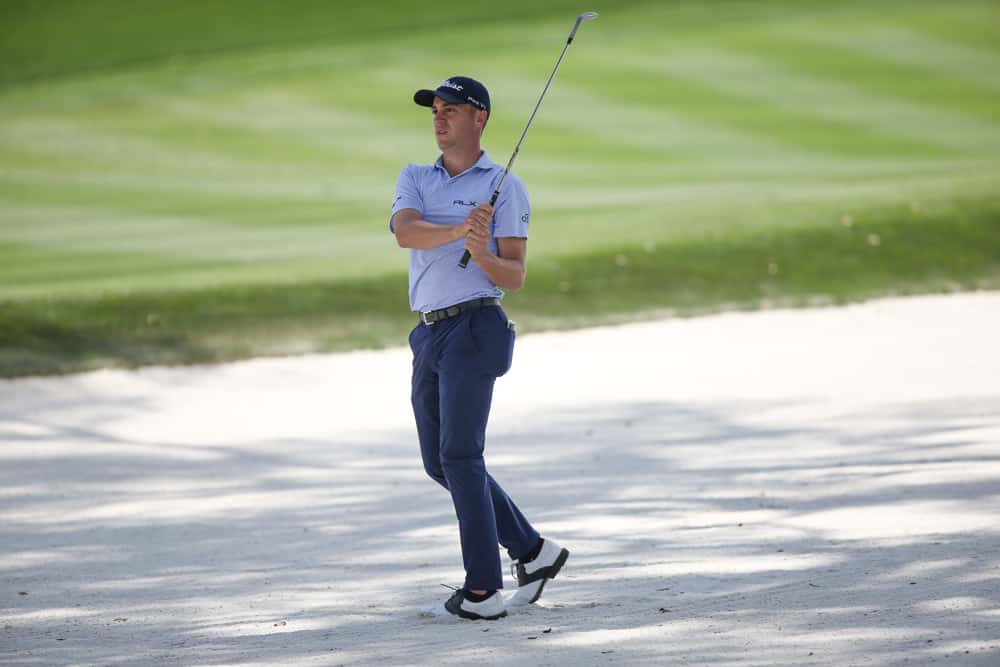 Prop bets can be one of the most profitable avenues for gamblers at a golf tournament. And at the PGA Championship, the books pull out all the stops and allow someone to bet on almost anything.

Here are some of the best prop bets for the Masters (odds courtesy of PointsBet, *Promo Code SGP*).

I have a firm and fast rule that if a tournament sees any sort of windy conditions, I’m not a fan of betting on Justin Thomas that week. As of this writing, it doesn’t look like the wind will be a significant factor, particularly on the weekend.

Per Windfinder.com, here is what the wind is shaping up to be all four days:

Justin Thomas didn’t draw the best tee time for the PGA Championship. Thomas will tee off on Thursday morning for his first round and Friday afternoon for his second. The scoring conditions for him look ideal on Thursday, but he might falter a bit on Friday with gusts between 15-20 MPH. But assuming he makes the cut, he should be able to attack a completely defenseless golf course on Saturday when the winds lay down. He should climb up the leaderboard quickly on Saturday to put himself in the mix. Late Sunday afternoon may get dicey because winds will gust up to 20 MPH, which may ruin his chance to win.

But between a forecast that seems favorable to Justin Thomas and a golf course that fits his strengths, he’s primed for a Top 10 pick. The PGA Championship will come down to how well one hits their irons and gets up and down from off the green. No one in the field does it better than Justin Thomas.

If you’re uncomfortable betting Justin Thomas at 16/1 or missed the pricing window on him, betting him +160 on a Top 10 prop at the PGA Championship is a good pick to make.

Death. Taxes. Bet Tony Finau Top 10 at a major. While he’s slumped a bit since the Masters, he still shows all the attributes needed to be up near the top of the leaderboard. Finau shows a very good command with his irons and is solid from off the green. He also finished Top 10 at Whistling Straits in 2015. That’s another major championship Pete Dye design with very similar features that the Ocean Course has.

He also has some very strong finishes on Paspalum surfaces. His lone win at the Puerto Rico Open in 2016 was on paspalum. He also owns a pair of Top 10’s at the Mayakoba Classic, which is another paspalum golf course. And he finished T2 at the Saudi International, which is also on a paspalum golf course. Paspalum greens tend not to have much grain in them. Tony Finau has struggled to put on grainy Bermuda surfaces in his career. But some of his best performances have come on non-grainy putting surfaces such as bentgrasses, poa, and overseeded greens. The greens this week will roll similarly to his strongest surfaces.

The things Scottie Scheffler does really well is a good match for the Ocean Course. Scheffler has an excellent combination of both length and accuracy off the tee. When he does hit it offline, Scheffler still manages to do a good job hitting the green in regulation. That’s shown by his 87% Good Drive % on the PGA Tour this season. And when Scheffler does miss a green, he’s a very good scrambler. These three attributes are keys to success for the Ocean Course this week. That should be good enough for Scheffler to finish inside the Top 20 at the PGA Championship.

Harris English was in a rut following his win at Kapalua in January. But lately, things are starting to turn around for him. English recorded his first Top 20 finish since Kapalua last week at the Byron Nelson. He didn’t do it all with the putter. English gained 1.22 strokes per round tee-to-green at the event. At his best English has a good combination of length and accuracy off the tee. He hits greens at high rates and he’s a solid scrambler. He also owns a win at the Mayakoba, another paspalum golf course. At +400, he’s a solid bet to make for a Top 20 prop this week at the PGA Championship.

Marc Leishman is a trendy sleeper pick to win the PGA Championship. After a long period of poor play, Leishman appears to have awoken from his slumber. Leishman finished T5 at the Masters and T21 at last week’s AT&T Byron Nelson. He also teamed with Cameron Smith to win the Zurich Classic.

But I’m still not convinced he’s fully back. Last week’s solid showing at TPC Craig Ranch was fueled solely with his putter. Leishman gained over 1.6 strokes per round putting for the week and lost 0.3 strokes tee-to-green. It also doesn’t seem like the wind is going to be a major factor this week at the Ocean Course. That would help level the field a bit to mask some of his ball-striking deficiencies. But without difficult ball-striking conditions, he might be exposed.

Fade the public perception and bet for a Marc Leishman missed cut at +150.

Justin Rose just isn’t the player he used to be. While he finished Top 10 at the Masters, that was almost entirely due to his stellar first round. He was pretty mediocre over the rest of the tournament. He then followed that up with a missed cut at the Valspar and showed very little fire on Thursday and Friday.

Rose isn’t nearly the ball striker he used to be and has struggled to scramble from off the green over the last year. That’s a poor combination for this golf course. He’s a prime candidate to miss the cut at the PGA Championship.

There are a lot of things going Sergio Garcia’s way this week at the PGA Championship. He’s one of the best ball strikers in the field tee-to-green. He has a really good history on paspalum golf courses. And he’s played Pete Dye tracks extremely well.

But gamblers have looked at Sergio Garcia’s eye-popping stats before majors before, and he’s repaid them with an early exit on Friday many times over the last few years. Since 2018, Sergio Garcia has missed the cut in nine of the last 11 majors, with a high finish of only T52. For whatever reason, things don’t click at the majors for him. Blindly bet him to miss the weekend at +120.

As of this writing, the wind doesn’t seem like it’ll play a significant role at the Ocean Course. The wind is the primary defense of the golf course because of the generously wide fairways and landing zones off the tee. The golf course will play difficult to those who don’t have it. But it can be very gettable if the weather conditions dictate it.

The weather conditions look fairly similar across Thursday and Friday, with the exception that anyone going off Friday afternoon might get some moderate wind gusts. On Saturday, winds are forecast to be completely absent. I expect someone to go very low that day.

These are probably props you should wait to bet until we get a clearer picture of what the forecast will be. For starters, the weather forecast can change in an instant and make the golf course significantly harder. There also seems like there’s steam coming in on all the overs on scoring props. The popular narrative is how long and tough this golf course is. That opinion may prove folly if the wind doesn’t blow. But right now, money seems to be pouring in on the perception this will be a very difficult PGA Championship. You may get much more favorable numbers to bet the under on all these tomorrow evening.

But as of this afternoon, I’m leaning that someone will shoot 65 or better at some point in the tournament. I’m also leaning that the cut will settle around +2 or +3. And that whoever wins the PGA Championship will do so with a winning score of -10 or better.

When I think about golf courses that favor Bryson DeChambeau, I think of golf courses that he’s able to take shortcuts. That means he’s able to hit the ball over dog legs, tree lines, and hazards that the original architects never dreamed that anyone would be able to hit over them. He also has done well at golf courses where the field overall misses fairways at high rates. And he also has faired well at golf courses where he can gouge out of the rough and run the ball up to or just off the green. That’s exactly what happened at Winged Foot and Bay Hill, the last two times he won.

But at places that require more positional golf or ones where he couldn’t gain access to parts of the golf course to give him a decided advantage, he’s fallen flat on his face. This is most notable at Augusta National and Muirfield Village. However, TPC Sawgrass was a golf course many people (including myself) thought he couldn’t overpower. He played fantastically and managed a T2 finish.

The Ocean Course is not TPC Sawgrass. The Ocean Course is much more wide open than Sawgrass. Everything is also out in front of the player, and there are no shortcuts to be had. The field also hit the fairway at a significantly higher rate at the 2012 PGA Championship than the average rate on the PGA Tour all season.

For Bryson to have an advantage over the field, he needs opportunities to take shortcuts around the golf course with the only penalty for missing is rough. The penalty for missing badly off the tee is a penalty stroke. The greens are also raised at the Ocean Course, meaning that he can’t run the ball up to the green into a safe area for easy up and downs. Bryson is notorious for poor performances around the green, especially off of tight lies. He may be exposed once again this week.

As such, I don’t have very high hopes for Bryson at the 2021 PGA Championship. The books will offer many top players with better prospects against him. Whether it be Rory McIlroy, or Jordan Spieth, or Justin Thomas, all of them are solid options to play against Bryson in a head-to-head matchup this week.

Garrick Higgo is the flavor of the month around the golf gambling community. He has won twice on the European Tour in his last two starts, blowing away the field with eye-popping performances. But upon closer inspection, Higgo’s recent run of success has been driven entirely by his putter. Over is last four tournaments, he only gained 0.17 strokes per round tee-to-green, with almost all of it coming due to his length off the tee. But he’s been mediocre at best with his irons and scrambling. And on top of all of that, he’s gained a blistering 1.63 strokes per round putting over that stretch. That is screaming for regression.

Meanwhile, Si Woo Kim is a solid ball striker with a good track record on Pete Dye designs. He should be able to take down Garrick Higgo head to head in Higgo’s debut on American soil.