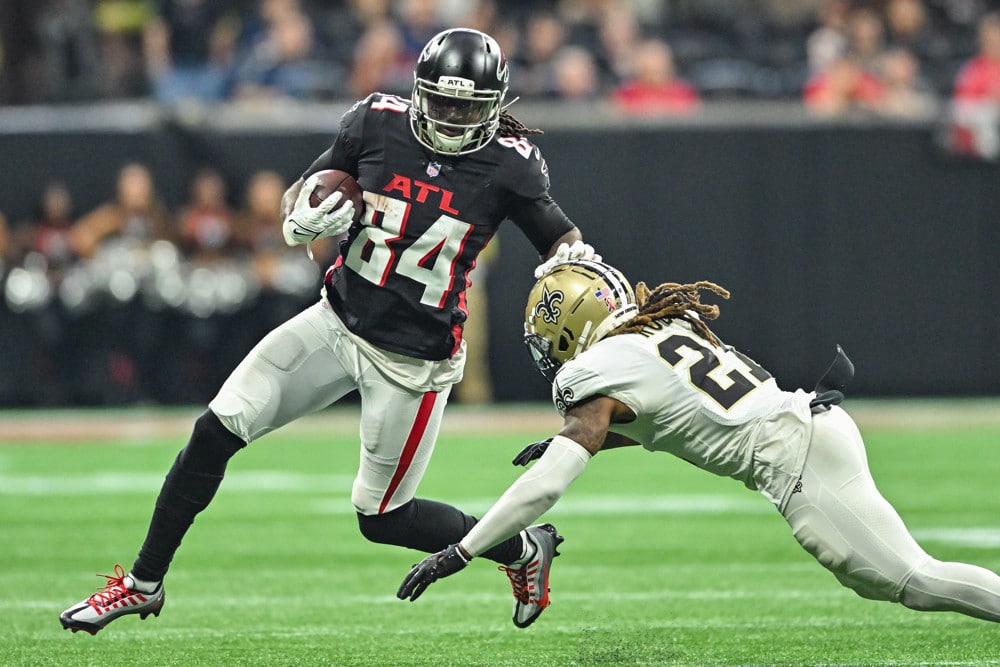 Week 1 felt like a blur of beer and injuries. The DFS streets giveth and taketh away. Where some of the most appealing DFS plays last week were spectacular, others fell flat and left the cupboards bare. The first DFS Flowchart of the season identified some of the best optimal moves on the slate, especially on the value end, and we’re aiming to keep the good vibes rolling along all season. Joe Burrow, Derek Carr, and Russell Wilson are all in the same general salary range with a nice assortment of stacking options. I am not getting cute this week and going with the obvious high-volume stacks: Burrow with Ja’Marr Chase, Carr with Davante Adams, and Wilson with either Jerry Jeudy or Courtland Sutton (both are great values). Wilson stacks are also the highest in leverage, with only a 4% projected rostership.

I’m not so much worried about rostership at the RB position for Week 2. I am seeing too many obvious values when considering projected points per dollar. That glaring player was D’Andre Swift last week, to the tune of a RB3 finish under $7k. Saquon Barkley is over $7k this week, but vastly underpriced compared to Christian McCaffrey and Jonathan Taylor, whom Barkley outscored both of in Week 1.

DFS managers are not taking Jeff Wilson seriously versus Seattle on Sunday and I believe that to be a grave mistake. He will get plenty of touches with TD upside at the bargain bin salary of $5.1k.

The Bucs are going to be short on healthy receivers, which very well could mean the first big break for the talented rookie from Arizona State, Rashaad White. The Bucs don’t want to burn out Leonard Fournette too early in the season, even if Lenny is another fine play in the RB pool.

Leverage is still the most important factor in large-field DFS tournaments. To truly understand what it means, it helps to subscribe to a premium DFS site with access to accurate projected rostership percentages. Leverage is the ratio between a player’s likelihood of a ceiling performance and their projected popularity among entries on a particular slate. In layman’s terms, you want the guys who go boom that hardly anyone has rostered. They lift you up and separate you from the pack of competing entries.

No matter how much Arthur Smith features the explosive Cordarrelle Patterson, DFS managers assume the old guy can’t keep getting away with 20-point fantasy performances. He is one of the best leverage plays on the Week 2 Sunday main slate, projected to be optimal in 15% of lineups despite only 7% rostership.

TE1 Mark Andrews will definitely get the fade from DFS players reeling after his ho-hum effort last Sunday, projecting as only the fourth-most rostered TE at a nice discount.

Jaylen Waddle was the only Dolphins’ offensive player to find the end zone last week and now faces a depleted Ravens secondary with the Cheetah on the other side. An explosive upside player like Waddle hovering around 4% rostership and only slightly overpriced is a nice spot to take advantage of.

Good luck guessing with any certainty who the best slate-breaking DFS value plays will be each weekend. The best you can do is pick guys who will at least have a shot to pull it off. I love the role that Greg Dortch is filling for the Cardinals. Their defense is so bad, and their offense runs a whole heck of a lot of short passing plays. At only $3.5k, the little slot guy only needs between 10 and 15 points to pay off in an optimal lineup.

Along the same lines as Dortch comes the finally-healthy Parris Campbell. His target competition is banged up. Alec Pierce has already been ruled out with a concussion and bad hands. Star WR Michael Pittman, Jr is a game-time decision and could be limited versus the Jaguars. Campbell could be in line for a lot of volume, which bodes well for an athlete of his caliber. Another nice value in that game is Nyheim Hines.

We oft forget about oft-injured players. Take Sterling Shepard, for example. The former Oklahoma standout has been injured for seemingly his entire career. Shepard has been the best receiver on the field for the G-Men when he has been healthy. He was really the only consistent receiver aside from Saquon in Week 1 and is a very low-priced stacking option in a Daniel Jones stack for GPP tournaments.

Yes, the Bengals will be ultra-chalky. I don’t care. The best plays are the best plays. The price is too good to turn into bad chalk, no matter how unlikely that might be. Any game started by Cooper Rush is a huge green flag to take advantage of in DFS while the getting is good.