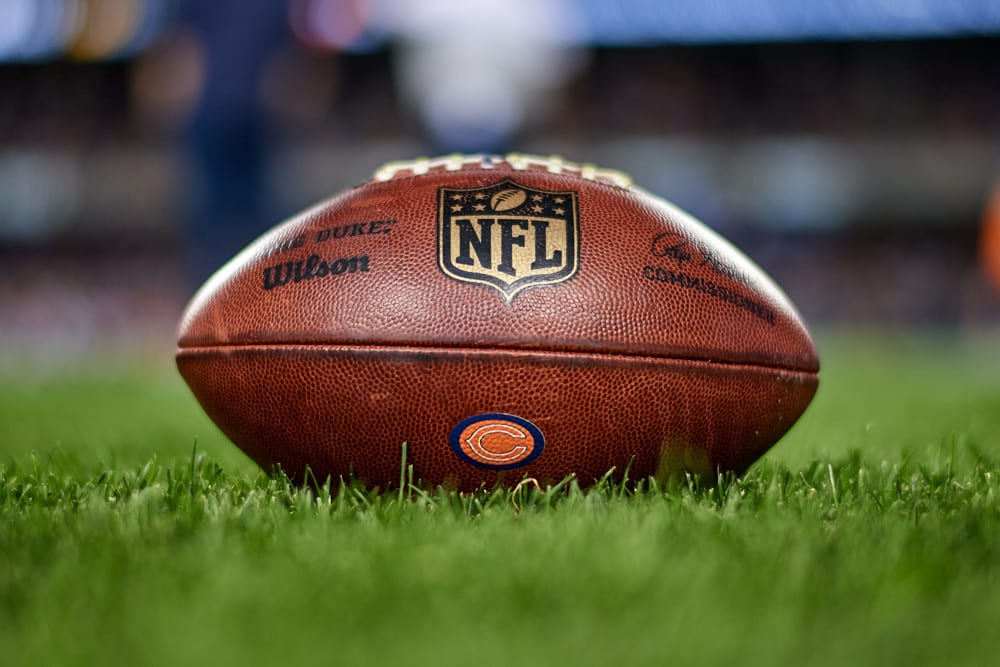 CHICAGO, IL – AUGUST 29: A detail view of the Chicago Bears logo and NFL crest logo is seen on a NFL football prior to game action during a preseason NFL game between the Chicago Bears and the Tennessee Titans on August 29, 2019 at Soldier Field in Chicago, IL. (Photo by Robin Alam/Icon Sportswire)

One of the biggest indicators for potential breakout candidates are individuals that are playing significant snaps, large target shares, or large numbers of carries but haven’t yet put the huge numbers up yet.

We will publish the NFL Fantasy Football Opportunity Report weekly with insights on players you may want to target or ignore. Inside this article, we identify snap shares, target shares, and carry splits to help you understand how the fantasy football landscape is changing as the season progresses.

Do We Want RBs in Buffalo?

It appears that Singletary is the primary back but still not interested as he played 59% of snaps and ended with ten total opportunities (8 carries and two targets). I expect Cook’s usage to increase after his second-quarter fumble; he was nowhere to be found. He only played three snaps.  That said, the volume isn’t enough to trust, and I recommend avoiding the backfield.

Gabriel Davis is on the field for almost every play, but Stefon Diggs is still the clear alpha. While Gabriel Davis played 98% of snaps to Diggs 64%, Diggs demanded nearly 30% target share against one of the best corners in the game in Jalen Ramsey. I will say, though, that the air yards belong to Gabe, with an average of 16 air yards per target.

Everyone was waiting to see the Cam Akers start. He did not, and Henderson dominated the game with an 82% snap share and 81% of the RB touches. Cam Akers is a hold until we see more information. I would not recommend panic selling Akers, but if you can get Henderson without overpaying, I would suggest it.

Cordarrell Patterson is likely a top 15 RB in carries. He set career highs in carries and yardage, was on the field for 65% of plays, and had 22 of 26 running back carries. Olamide Zaccheus playing a 60% snap share, is playing over Bryan Edwards. I think it’s time we move on from him.

Nick Chubb and Kareem Hunt are both locks for your rosters every week. Hunt will continue to see the receiving work, and the rushing split will remain around 65/35. They will continue to produce as top 15 backs.

Donovan Peoples-Jones appears to be the second option in the passing offense with 82% snap share and 37% target share.

The Detroit backfield seems somewhat messy, with Swift getting 54% to Jamaal Williams 39% carries share, but Swift played 67% to Williams 33%. It was clear in this game that Swift was far more explosive and the better player. I would recommend not overreaching for Williams as I think we see more of what happened last year where Williams fell off after week 1.

Most were wondering who the second option was going to be after the offseason. DJ Chark has officially taken that role with 81% snap share and 22% target share in week 1.

In an offseason where the fantasy football community was screaming for Rhamondre Stevenson, there was a pretty big disappointment on Sunday. The split was basically an even 50/50 between him and Damien Harris, with Harris getting nine carries to Stevenson’s 8. Harris also had more receptions. With the offense not playing well and looking like a defensive coordinator is calling plays, sorry, I would avoid playing these guys until some additional clarity is provided.

Devante Parker played 100% of snaps but only received 7% of the target share. Don’t fade; the production will come.

The new rookie phenom in Dameon Pierce didn’t come to fruition in a very interesting game against the Indianapolis Colts on Sunday. Rex Burkhead out-snapped (71% to 29%), out-touched (50% to 39%), and out-caught Dameon in his rookie debut. I wouldn’t panic, but this is currently screaming; wait until they end up in your lineup again.

Miami backfield was a big question coming into the season with some new additions in Chase Edmonds and Raheem Mostert. We did get some clarity in a roughly 60/40 split in snap share between Chase and Raheem. Edmonds did out-touch Mostert as well at 16 to 6. Edmonds is the clear back to own here.

Not Such a Breeze

Don’t overreact. That’s the key but also not to ignore. Michael Carter out-touched Breece Hall and played 60% of snaps to Halls 45%. My advice, both are flex worthy with Joe Flacco at the helm.

Everyone wanted to forget about James Robinson. Everyone wanted to ignore Doug Pederson when he explained that Robinson would be the lead. He is, and Etienne will be relegated to receiving work that will be valuable but not Kamara-esque as we had hoped.

Christian Kirk finished with a huge target share of 32% and delivered with a solid stat line of 6 receptions for 117 yards. With his utilizations, he stands to be a WR2 for the remainder of the season.

AJ Dillon, similar to Rex Burkhead, out-touched his counterpart, Aaron Jones in all regards. AJ Dillon is now the 1A and quite possibly the 1 in a GB offensive that cannot be worse than it was this week.