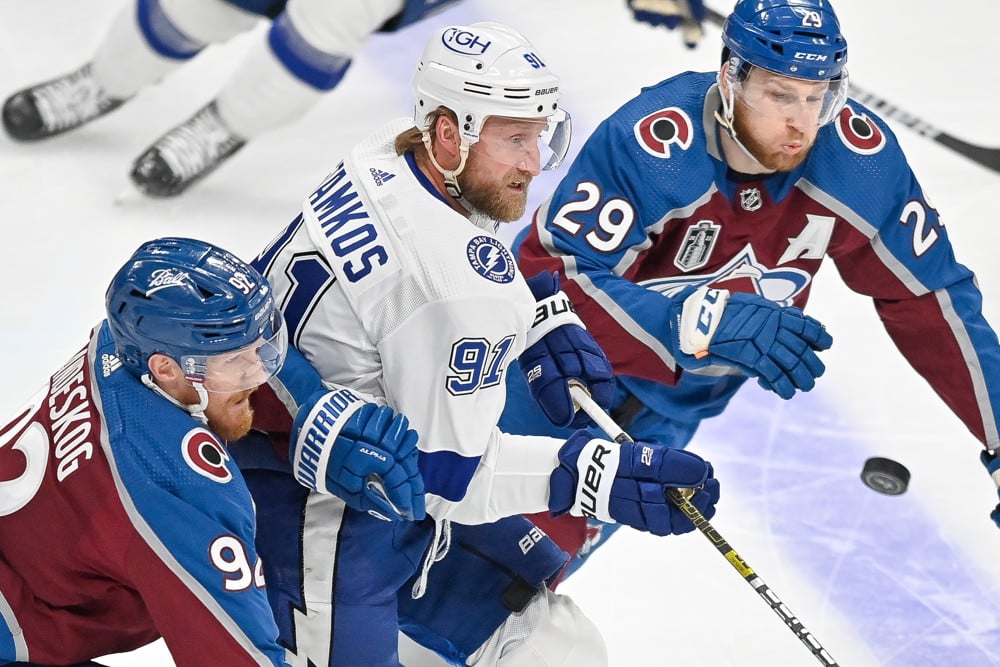 The first game of the Stanley Cup Final didn’t disappoint! The Colorado Avalanche took home a 4-3 victory in an exciting matchup that required extra time. Andre Burakovsky closed the game in overtime with a one-timer goal to cash the over, and give Colorado a 1-0 lead in the series.

The Tampa Bay Lightning played exceptionally well despite losing; they overcame a two-goal deficit twice in game one. As predicted, the Avalanche outshot the Lightning 38-23, and we’re dominant on the puck at both ends of the ice. They controlled the tempo of game one, but Tampa played to their tune. We now look to game two for the best Odds, Bets, and DFS Picks.

The Lightning have now lost all three matchups this year against the Avalanche. However, every game has been close and decided by one goal. The Lightning were laying -135 to cover the spread in game one, so the books have adjusted quite a bit here, shifting to -200 against the +1.5 puck line.

I expect Game 2 to be a tighter matchup and a lower-scoring affair. However, I’m not betting that the Lightning will cover the spread. I’m losing value, and the significant shift feels like the books are baiting me to lay more on the cover or make a riskier parlay bet with the puck line included.

Never count out the defending champs 😤

WE. ARE. TIED. #StanleyCup | #GoBolts pic.twitter.com/cuHFpgsld0

Despite blowing two 2-goal leads, Colorado still dominated game one by outshooting their opponent 38-23. The Avalanche we’re nearly perfect outside of their slippage in the 2nd period when they allowed back-to-back goals in less than a minute. Both teams tightened up on defense after that, and I expect that level of play to roll into game two.

The Avalanche have hit the over in nine out of 15 games played these playoffs. However, Colorado cashed the over the past two games played; they’ve only cashed the over three times in a row just once this playoffs. I’m predicting a 4-1 victory for Colorado; I think the game will start slower than game one, so I also like the 1st period Under 1.5 goals; you can get odds of +115 at Wynnbet for this pick.

Landeskog played great in game one, recording a goal and an assist through 23+ minutes on the ice. I expect him to continue producing in game two and deem him worthy of my captain spot. He’s a value pick at the captain slot with his current salary; he ranks 11th highest among available players.

Landeskog has 18 points in the playoffs, including nine goals and ten assists. He averages 15.36 fantasy points per game these playoffs; that’s a point higher than his season-long average of 14.2.

This salary is an absolute steal for Nichushkin, whose coming off an excellent start to the Stanley Cup Final. He, like Landeskog, also recorded a goal and an assist in game one. I love this L1 stack for game two; you’re getting tremendous value on Nichushkin, whose playing around elite talent in Nathan MacKinnon and Landeskog. Nichushkin was contributing everywhere on the ice; he played physical, got the puck to the net (6 SOG), and played 19+ minutes.

I hit an anytime goal prop with Nichushkin in game one, and I’m returning to him again. He’s playing with the excitement and energy that the Stanley Cup Final demands. He passes the eye test and has two 25+ DFS outputs in two out of his last three games. He’s a trending pick with value; get him in your lineups!

Artturi Lehkonen has 10 points through his last nine games played. He was able to get on the score sheet in game one with a goal with just one shot on net. While he only had one shot on net in game one, he recorded 13 SOG through the previous three games before the Cup Finals.

He gets minutes playing on the top power-play line, so he gets an extra boost playing alongside the team’s top talent in Landeskog, MacKinnon,  Mikko Rantanen, and Cale Makar. His goal in game one came from just going to the net and tipping in a back-door pass that Vasilevsky most likely anticipated being a shot. Lehkonen is in a great position to succeed again in game two; he’s an easy pick based on his low salary allocation and roster utility.