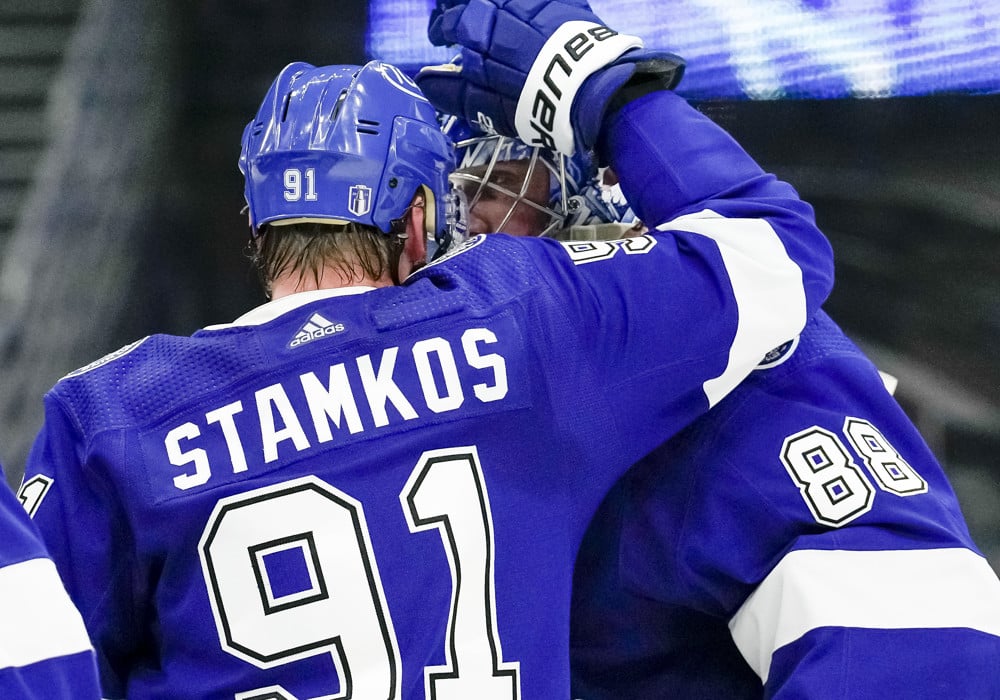 Path to the Stanley Cup Final – First Round: Blowing past the Maple Leafs

The Lightning faced off against the Toronto Maple Leafs in a much-anticipated first-round series. They were the underdog and lower seed in the series despite winning the last two Cups and the Leafs not winning a playoff series in the post-lockout era. But that didn’t matter in Game 1 as Toronto made a statement with a 5-0 win at home. Tampa Bay bounced back, however, with a 5-3 win in Game 2.

The teams continued to trade wins through six games. The Maple Leafs had a 3-2 series lead in Game 6, but the Lightning won in overtime to send the series back to Toronto and ultimately came out victorious in Game 7.

This series was a fun back-and-forth affair with six high-scoring games before a 2-1 final in Game 7.

Second Round: Taming the Cats

The Lightning took on their in-state rival Florida Panthers in the second round. The Panthers finished the regular season with the best record in the NHL and looked poised to make a deep playoff run. But that wasn’t the case.

Andrei Vasilevskiy played great in this series, as he does in most playoff games (especially elimination games). The Lightning outscored the Panthers 13-3 in a clean sweep, showing their dominance in the state of Florida.

It was an impressive series win for the Lightning and it got people starting to talk seriously about a three-peat.

Eastern Conference Final: Taking a bite out of the Big Apple

Tampa Bay once again found themselves behind early in a series. The Bolts’ rust showed early in the series, losing Games 1 and 2 in New York by final scores of 6-2 and 3-2. It had the Madison Square Garden chanting “Igor’s better” in reference to Igor Shesterkin outplaying fellow Russian netminder Vasilevskiy.

But that only lit a fire under Vasi and the Lightning. They then won four straight games to take the series in six games, only allowing one goal in each of the last three games.

The Lightning did all of this without Point, who played a key role in their previous Stanley Cup runs.

Joel Meyer wrote in his Avalanche path to the Stanley Cup article that they “will be facing their best opponent by far in the Tampa Bay Lightning in the Stanley Cup Final.” Well, the same goes for the Lightning. The Avalanche have been the odds-on favorite to win the Stanley Cup for quite some time and that hasn’t changed. Colorado has a few of the best players in the league with Nathan MacKinnon up front and Cale Makar on the backend. Not to mention Mikko Rantanen, Gabriel Landeskog, and Devon Toews, among others.

So, if the Lightning win the Stanley Cup, how will they do it? Goaltending.

Andrei Vasilevskiy to win the Conn Smythe (+400) is a great value play. The Lightning are “only” +155 to win the Stanley Cup on WynnBet.

For an even bigger value bet, more of a longshot, I’m looking at Steven Stamkos (+1500). Stamkos had two big goals to secure the series win against the Rangers and he’s the captain of the Lightning. If it’s a high-scoring series and Stamkos stays hot, the recency bias of a big performance in the Stanley Cup Final could put him over the top.