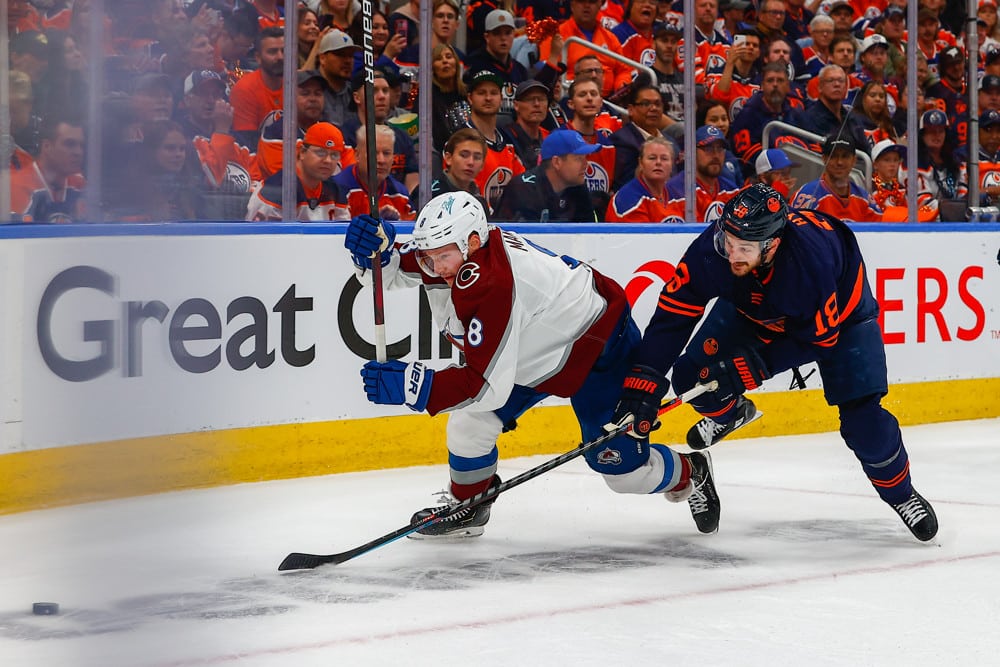 For the first time in 21 years, the Colorado Avalanche have won the Campbell Bowl and are off to the Stanley Cup Final. While they have gone 12-2 in the first three rounds, including two sweeps, they have not done so without adversity. Nazem Kadri is the most serious casualty, as the second-line center has undergone surgery on his hand and will likely miss the rest of the playoffs. A more superstitious Avalanche fan could be encouraged by history, though, if he or she remembers who they missed the last time they won the Cup: Peter Forsberg, one of the greatest second-line centers of all-time.

Before we look forward and consider the Conn Smythe odds for the final, we can quickly review how the Avalanche have beat each of their opponents thus far.

First Round: Surpassing the Preds

The Predators, who we thought might be a bubble playoff team at their ceiling, overachieved their projections this season. They had a strong year, but after losing their elite goalie Saros to injury at the end of the regular season, nobody gave Nashville a chance against Colorado, certainly not Darryl Sutter. The betting market itself saw the Avalanche move from -350 favourites to win the series to -800 in some spots.

Even if Saros were healthy, it is hard to see how this series would have gone much differently. The Avalanche, 100% healthy for the only time all season, blistered them with superior skating and forward pressure. Other than perhaps Matt Duchene, who of course was playing against his boyhood club and the team who drafted him, the Predators could not keep up. Colorado won the CF% 63-37%, which was the widest margin in any series. Even with Connor Ingram playing well as a third-string back-up, the Avalanche dominated this series, outscoring the Predators 21-9.

Second Round: The Blues Lose

We knew that this would be a trickier matchup from the jump. There were a few things working for the Blues in this series: (1) they sought revenge after being embarrassed by Colorado in a sweep last year; (2) they have an experienced team under a wily coach who knows how to get the most out of his players in the playoffs; and (3) this was potentially one of the worst match-ups for Colorado in terms of strengths on weaknesses. If the Blues played their game effectively, we could have seen something similar to what the Golden Knights did to the Avalanche last year. They wanted to beat up their smaller defencemen down low and turn their rapid transition game against itself, creating turnovers and making the Avs’ offence stillborn in its own zone.

There were many times that the Blues accomplished this. Game 2 is the best example, where the Blues controlled the play, bullied the likes of Samuel Girard, and the O’Reilly line thoroughly outplayed the MacKinnon line. While the Avalanche did have explosive moments during the series and could look like world-beaters, generally the Blues were exceptional in containing them with active sticks and a relentless work ethic.

In the end, though, Colorado was finally able to break through the 2nd round, largely due to the team’s depth, exemplified by the series-winning goal by Darren Helm with 5 seconds to go in Game 6. Interestingly, Colorado won the CF% 61-39, just slightly below the Preds series, but your eyes would have told you otherwise: St. Louis was in this one all the way.

Purely from an entertainment perspective, this was arguably the most intriguing series of the entire playoffs. We had two of the best offences facing one another, with the most exciting forward on one team, the most exciting defenceman on the other, and then MacKinnon and Draisaitl to boot. It was sloppy hockey to be sure, especially in Game 1, but the Avalanche were happy to be done with the Blues’ elite checking game; they were free to make the most of all the open ice that the Oilers’ bad defence offered up.

We remember being surprised at the odds in this series compared to the Blues contest, where the Avalanche were -350 favourites. Before the odds were released we were confident that Colorado would be at least -300 again, seeing as the Oilers were a better team from a power rating angle but the Blues had the matchup, experience, and goaltending advantages. So, the biggest market surprise of the playoffs was that the Avalanche were only -200. Even allowing for the fact that it was the semi-finals, how great the Oilers looked against the Flames, and perhaps some public money on McDavid, this was a bargain.

While the advanced stats show that the Oilers played the Avalanche more closely than the Blues, there was only one team ever in this series. St. Louis has shown all year long how to outperform the xG, which is by intuitive hockey sense and capitalizing on the randomness that occurs around the net. The Avalanche had problems with that, not with shutting down the Oilers’ offence; after skating up and down the ice on the Flames, McDavid had just one rush attack all series long against the Avalanche.

This is the lesson: the lines these books make are largely based on power ratings, with often only minor manual adjustments. The bettor can glean value by finding matchup advantages that are not sufficiently accounted for in the line.

The Avalanche will be facing their best opponent by far in the Tampa Bay Lightning in the Stanley Cup Final. The defending champions have shown their quality again and again with their backs to the wall, especially against the Maple Leafs and the Rangers. Colorado has certainly been the most impressive team both in the regular season and in the playoffs, but in order to be the best, they need to play the best. While the Lightning may not have the same depth or top-end quality, they have championship pedigree and a goalie who refuses to lose.

When we look at the current odds for players to win the Conn Smythe, we think that there are only four players worthy of the award: Cale Makar (+170), Nathan MacKinnon (+210), Nikita Kucherov (+400), and Andrei Vasilevskiy (+400). The two forwards can only win if they get to 14+ goals and become the top goalscorer(s) in the playoffs. Viktor Hedman has been great as well during these playoffs, but he has not had the requisite production in order to swing the voters his way.

If Tampa Bay wins the Stanley Cup Final again, it will probably be because of their goaltender, so we can write off their players with relatively little risk. If Colorado wins this series, the safe play will be Makar, about whom every hockey journo has been raving about all playoffs long. He has not only accumulated 22 points in just 14 games but has shut down McDavid and silenced just about everyone else while he has been on the ice. He has also been the one guy who has consistently shown up in big games, so instead of taking the Avalanche to win the series at -190, we think there is more value in taking Makar to win Conn Smythe at +170.

Conversely, if the Lightning were to win the Cup, it will be on the back of their otherworldly goaltender, since the performances of both teams thus far will tell you that the Avalanche should carry the play. The Lightning will need their goalie to win this series for them, so at +400, we think Vasilevskiy is another solid bet to win the Conn Smythe.