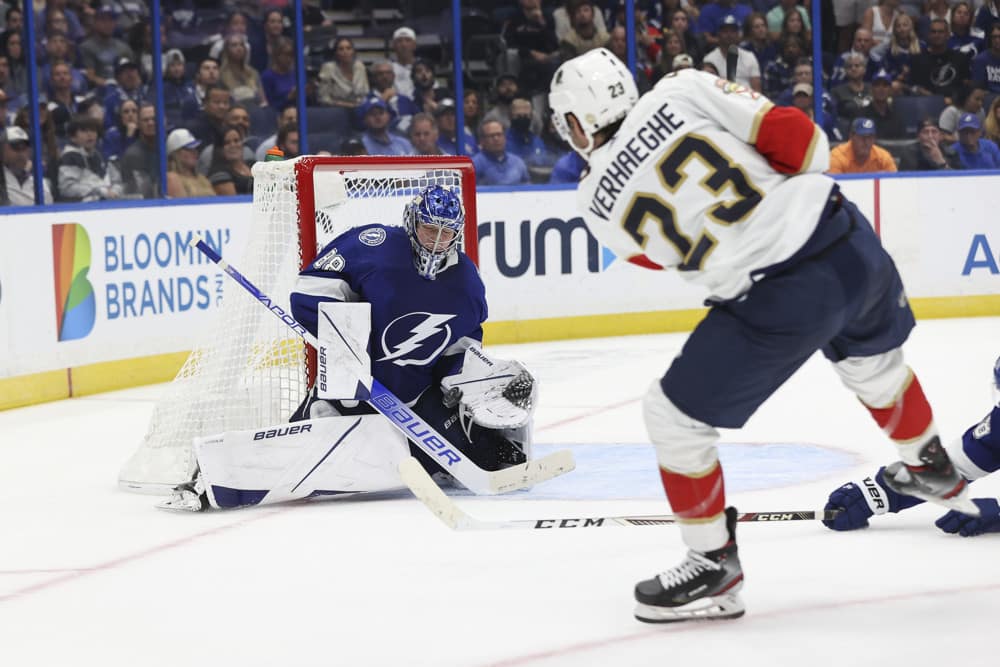 The first round of the NHL Stanley Cup Playoffs was one of the best in recent memory. Five series went the full seven games, including the Tampa Bay Lightning getting past the tortured Toronto Maple Leafs. It looked like the Florida Panthers may as well, but they came back to finish the Capitals in six games. Now, we move on to the second round of the NHL Stanley Cup Playoffs, and we’re continuing things with the Panthers vs. Lightning series schedule, odds, best bets, and more!

Florida Panthers (A1) vs. Tampa Bay Lightning (A3)

*Wednesday, May 25: Lightning at Panthers, TBD

*Friday, May 27: Panthers at Lightning, TBD

*Sunday, May 29: Lightning at Panthers, TBD

Panthers vs. Lightning: How they got here

The Panthers were pushed pretty hard by the Capitals. Washington stole Game 1 in Florida with a third-period comeback, but the Cats bounced back with a 5-1 win in Game 2. That didn’t last long with the Capitals posting a dominating 6-1 win in Game 3 to take a 2-1 series lead at home. Washington was on its way to a Game 4 victory until the Panthers tied it with the goalie pulled.

Florida went on to win Game 4 in overtime, Game 5 5-3 at home, and then Game 6 again in overtime to close out the series.

It was a surprising face that led the way for the Panthers in the first round. Carter Verhaeghe had 12 points (6 goals, 6 assists) including the overtime winner in Game 4, the game-winning goal in Game 5 (a five-point night for him), and the series-clinching goal in Game 6.

Trade deadline addition Claude Giroux also had himself a series with seven points, while Aleksander Barkov was third on the team with six points. Jonathan Huberdeau posted 115 points in the regular season but had just three against the Capitals.

Sergei Bobrovsky played every minute for the Panthers between the pipes. He went 4-2 with a .906 SV% and 2.79 GAA.

Tampa Bay traded wins with the Leafs in the first six games of the series after a 5-0 loss in Game 1. Andrei Vasilevskiy and the Lightning are perfect after a loss in the last few postseasons and that continued in the first round.

The back-and-forth series ended with two straight wins by the Lightning. Tampa Bay won Game 6 in overtime and then hung on in Game 7 for a 2-1 win despite losing Brayden Point early in the game.

It was the usual suspects leading the way for Tampa Bay. Nikita Kucherov had eight points and Victor Hedman is right there with seven. However, Brayden Point and Steven Stamkos were each held to just our points in the series. Ross Colton and Ondrej Palat stepped up with five each, and Nick Paul had a two-goal performance in Game 7 as a key deadline addition.

This series is going to be a dog fight. The Lightning know how to win and got past one of the other best teams in the Eastern Conference in the first round. However, it’s going to be that injury to Point and a banged-up Kucherov that make a huge difference.

There were questions about whether the Panthers’ high-flying, comeback style could work in the playoffs. It may not against a team like the Lightning, but it did against the Capitals. And that gives them the confidence heading into this series. While those comebacks against Tampa Bay won’t be as easy, maybe they’re able to grab a lead and hold it against a shorthanded Lightning squad.

I like the Panthers (-185) in the series but those aren’t great odds. If you don’t want to lay the juice, Panthers -1.5 Games (+135) is very tempting, especially if Point misses most of the series. Alternatively, I don’t see either of these teams only winning one game or getting swept. Over 5.5 Games (-185) would probably be my best bet in this series.