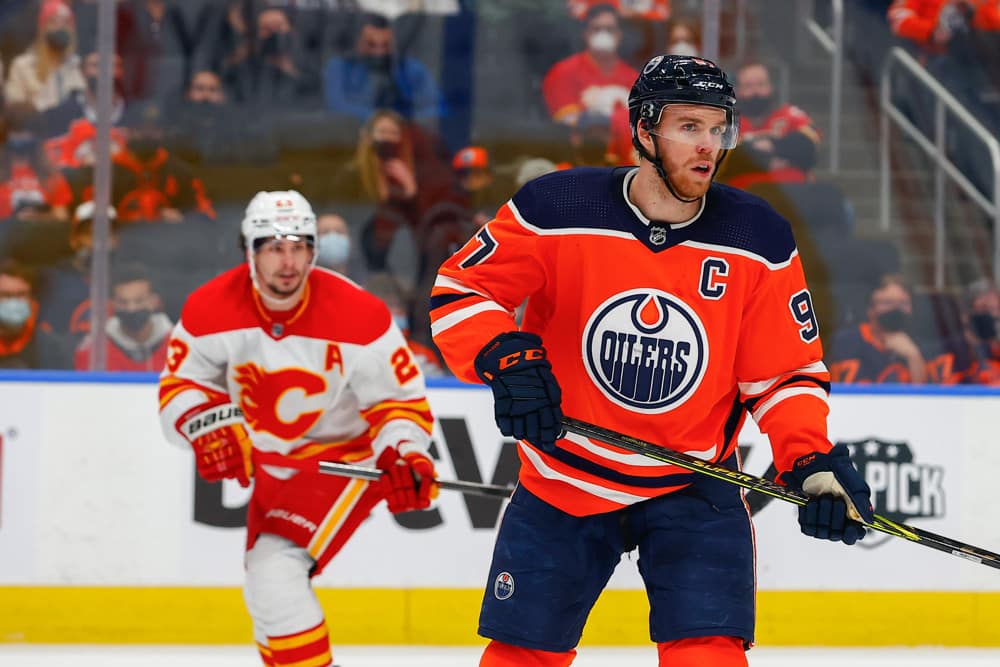 The Calgary Flames and the Edmonton Oilers start their second-round matchup this evening. Both teams showed their fair share of struggles in round one, but the slate is clean, and we’re back to another 0-0 series. The Flames and Oilers were both pushed to seven games in round one, and I expect another long back-and-forth series in round two.

The season-long matchup between these two teams ended with a 2-2 tie. However, the Oilers haven’t beaten the Flames since 1/22/22; the Flames have won the last two games and in considerable fashion. Before diving into the Series breakdown, let’s review the series long odds and each team’s round one performance.

NHL Playoffs Predictions – Oilers vs. Flames: How they got here

The Oilers found a healthy scoring tempo in round one vs. the Los Angeles Kings, including two games with 6+ goals. While scoring wasn’t an issue for the Oilers, they did fail to play consistently. The Oilers traded games with the Kings and didn’t play well at home. While they did take home a 2-0 victory in game 7 in Edmonton, they dropped game one and game five at home; both were big momentum swings for the Kings. The Oilers can’t fly that close to the Sun again in round two.

The Oilers tallied 27 goals for and 17 goals against in round one. They highlighted a heavy dose of offense led by Connor McDavid (4G / 10A). Connor tallied just 24 points through his 21 previous playoff games. However, he leads the league in assists and total points in this playoff run. McDavid will be an X-Factor again in round two; the Oilers will move on if McDavid repeats his first-round success.

While fans expected the Oilers to falter in round one, they won tough games after losses and always rebounded when necessary. The moment never seemed too big for them, and their tempo of play suggested that they never saw themselves out of any game, let alone the series. There weren’t many impressions made outside of the top scorers for Edmonton. Their depth group has much more to show us in round two; I’d like to see more from players like Darnell Nurse, Kailer Yamamoto, and Jesse Puljujarvi. The Flames have a defense than can slow McDavid; if they plan to move on, the back of the boat will need to start rowing!

The Calgary Flames had a wild seven games series in round one vs. the Dallas Stars. I never expected Dallas to win more than one game in that series. I thought the Flames would bring far more offense to the table. Instead, the Flames struggled mightily and only outscored Dallas 15-14. They will need to find their regular-season scoring tempo if they plan to hold up against the Oilers; the Flames finished 6th in the league in total scoring this season…just one spot ahead of Edmonton.

If there was a positive takeaway from round one, it has to be the team defense and play in net from Jacob Markstrom. Markstrom leads the playoffs with a .943 SV% and 1.53 GAA; he’s stopped 181 of 192 shots. The Flames also received strong physical performances from Noah Hanifin, Christopher Tanev, Dillon Dube, Blake Coleman, and Nikita Zadorav. Hanifin and Tanev have been great shot blockers, while Dube, Coleman, and Zadorav lead the team in total hits. The Flames will need these players to keep scrapping and taking out the trash while the team struggles to find its offense again.

The Calgary Flames are favorites to take this series with odds of -195. The Oilers and Flames tied their season-long meetings 2-2. However, Calgary was a far more reliable team this season. They are 47-41 against the spread, while the Oilers are just 39-43. The spread is very indicative of a team’s overall success: “Good teams win, but great teams cover!” While the Flames are a great team, they have a great challenge ahead.

This series will come down to Darryl Sutter vs. Connor McDavid; what game plan will Sutter bring to slow him, and will it be enough to stop McDavid? We’ve seen teams successfully attack McDavid and stifle the Oiler’s offense, but can it be done across seven games? I’m betting yes in this series; I believe the Calgary Flames have what it takes to win this series. During round one, the Flames were a far more reliable team at home; I think it will take each game again in this series, including a finale in game seven in Calgary. The Flame’s defense showed it could play big when it counts, and I’m betting the Calgary offense shows up early in the series.

I love taking the Flames at -195 for this series, and I also like taking any series props for over 5.5 games. I recommend hedging your bets with game 6 (+200) and 7 (+205) series totals. While the Oilers’ offense was prolific in round one, the Calgary Flames are the more reliable team season long, and ultimately that’s what it comes down to for me. The Oilers have a great offense but lack consistency on defense, while the Flames have the same levels of offense and offer a top-five defense in terms of total goals against this season.