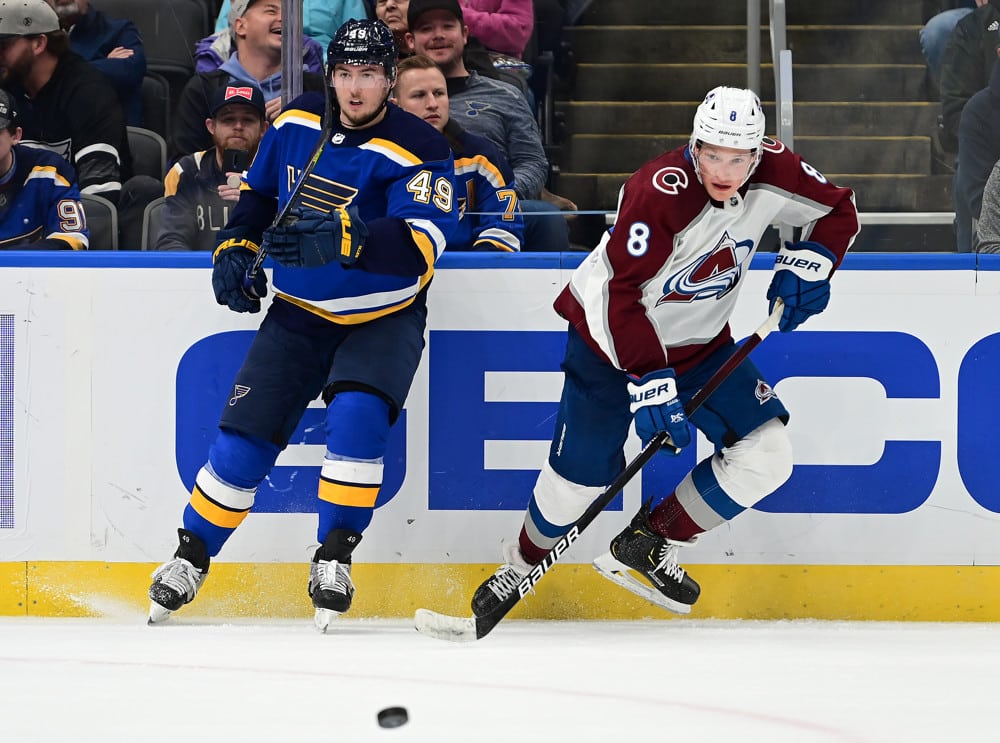 Wednesday, May 25: Blues at Avalanche, TBD

Friday, May 27: Avalanche at Blues, TBD

Sunday, May 29: Blues at Avalanche, TBD

Why the Avalanche will win

What happened between Colorado and Nashville in Round 1 was not an NHL Playoff series; it was more like a Group Stage competition in the Olympics where Team Canada gets paired up with Slovenia and Denmark. It was over before it started, or at least in the 1st Period of Game 1, where the Avs led 5-0. We are possibly being unfair to the Preds, who mustered up a couple of close games. They only had the lead for about five minutes the whole series, though, and they were outscored 21-9. The absence of Saros certainly did not help, but his stand-in Connor Ingram almost stole Game 2 anyway, so it was not a question of goaltending.

The point is that the Avalanche have been the favorites to win the Stanley Cup the whole season long, and showed us why. They dominated in terms of CF% at nearly 60%, which is the most of any team so far, and were lethal on the power play with a hefty 43.75 conversion percentage.

They need to play like this in every series. Last season they were similarly assertive, sweeping the Blues in a series that never felt close, but struggled to carry that form into the contest against the Knights. The team is better, however, and has likely learned from that experience. They also have a superior goaltender now in Darcy Kuemper, who fortunately was not seriously hurt by Johansen’s stick in Game 3.

When the Avs play their game, nobody can keep up with them. They cannot skate with them, they cannot score with them. Colorado is the massive favorite to win this series again because they are the much better team on paper. If their core guys show up, if their goaltending does not take a nosedive, if there are no random injuries to key players, there is no reason whatsoever they should not win this series comfortably.

Why the Blues will win

While we did hit our best bet for the Blues and Wild to go over 5.5 games, we missed on who would actually win the series. We were far from the only ones, however, as the Wild were heavily tipped to move on. Perhaps we should not be too surprised; the Wild are low-key one of the worst 1st round playoff teams in the league, and it is probably only because the Leafs exist that they don’t get more hate for it.

Part of the reason why we figured the Blues to be outmatched in that series was their 5 on 5 numbers. Out of all the playoff teams, only the Rangers had a worse CF%, and no team had a worse expected goals average than the Blues during the regular season. We did not know, however, that the officiating would be so involved, calling penalties that used to be run-of-the-mill plays in playoffs past. This seriously assisted the Blues’ chances, because while their 5 v 5 play is below average, their special teams are elite. They finished the season fifth on the penalty kill, and second on the power play, behind only the Leafs. They made use of this tool, doubling the Wild’s power-play goals 8-4, which of course makes the difference in the series.

Special teams have to be the best route for the Blues to win this series, which is also true because they want it to be physical. They know they cannot match the Avalanche in a track meet, but they can match them in a brawl. The Blues want to slow the game down and make it a grinding, cycling, forechecking fight; they do not want to see MacKinnon or Nichushkin endlessly on odd-man rushes. By bringing the Avs into their kind of game they can not only slow them down, wear them down, but also make special teams that much more important, since there will be a lot more power plays if things become physical.

Finally, the Blues need to know that the Binnington who played Games 5 and 6 is closer to the Binnington who won the Cup than the one who played this past season. Husso took his job from him this year, but played poorly in the playoffs and got the hook. We know that the Avalanche will have more scoring chances than the Blues, so for St. Louis to have any chance for the big upset, Binnington will have to be at his very best and win at least one game on his own.

In terms of star power, roster depth, defense pairings, and goaltending, there is no question that the Avalanche are the superior team. There is, however, something to be said for coaching and playoff experience; these Blues are not far removed from the group that won the Cup in 2019.  They still have the physicality and will to make this a gritty, grisly series, which may neutralise the better skill of their opponent.

There are multiple ways to attack this series from a betting perspective. We think that its winner will have a great chance to advance through the next round and into the Stanley Cup Finals. We are confident that the series winner will be the Avalanche, which is why we will be recommending a play on the Avalanche to win the West at -125. If you are the impatient sort of bettor, we are confident that the Avs can win in 6 games or fewer, so a weaker, secondary play would be Avs -1.5 on the series spread at -170. Or, you know, bet both. #degensonly

If you are more inclined towards the other side, there is better value betting the Blues to win the West at +850 than there is to win the series. This is firstly because we think the Blues are a better playoff team than either the Flames or the Oilers, and secondly because the Battle of Alberta will take a lot out of whichever team comes out of it alive. The Pacific Division was by far the worst in hockey this season, so we are happy fading it when the rubber hits the road.