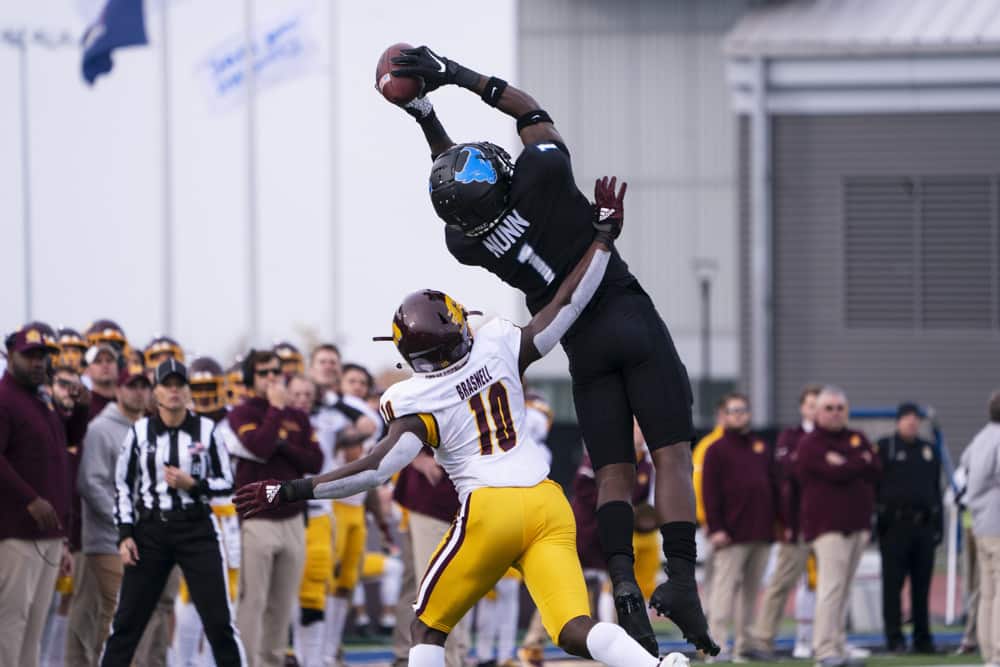 The USFL draft lottery is in the books and the official draft order has been established. We have also been provided with a partial pool of players for the USFL draft which is scheduled for Tuesday 2/22/22. That means we can start evaluating the talent at each position. Over the next couple of days, we’ll take a deep dive into these potential draftees. The season starts on April 16th and the excitement is building. Here’s the WR breakdown.

Come Tuesday, there’s a good chance that Alonzo Moore is the first WR taken off the board. Here’s a guy with nice size, excellent hands, big-play ability, and experience in many different professional football leagues.

Moore played four years at Nebraska and totaled 1,145 yards from scrimmage with 9 TDs. He also had productive seasons with the San Antonio Commanders of the AAF and the Seattle Dragons of the XFL. Most recently, he’s been catching TDs for the Sioux Falls Storm of the IFL. Additionally, he played for Mike Riley (coach of the NJ Generals) while at Nebraska. Don’t be surprised if Riley’s familiarity with Moore leads to the Generals drafting the WR early.

Cam Echols-Luper is a pure athlete that has a real chance to shine in the USFL. The son of former NFL player Curtis Luper, Cam started his collegiate career at TCU before transferring to Arkansas State and then Western Kentucky. In total, he registered almost 1,000 yards and five TDs over four years and was named the fastest receiver in the Sunbelt by Sporting News.

In addition to playing football, Echols-Luper excelled on the TCU track team. He was the Big 12 indoor long jump champion and part of TCU’s national runner-up 4×100 relay team. A back injury derailed his NFL career but CEL resurfaced last year for the Sea Lions of the TFL. A wideout who can run and jump will always be in demand. Plus, he has experience playing Special Teams in college which will certainly help his appeal to USFL coaches.

Perhaps you haven’t heard of Bethel University (located in Minnesota) but the Royals are a DIII powerhouse coached by the legendary Steve Johnson. After a couple of productive seasons in the Gopher State, CJII has been playing for the Alphas and the Aviators of The Spring Football League.

Charles Johnson is a straight-up burner with elite speed. He’s basically a track star playing football as evident by his 21.25 YPC in the TSL. Offensive coordinators will surely be salivating over a wideout who can get behind defenses and open up the field.

He may be small in stature but Deion Holliman is a game-changer at WR and possibly the best return man in the USFL’s pool of players. At Missouri State of the FCS level, Holliman was an ALL-MVFC performer who split time at RB and WR while returning kicks and punts. Since then, the wide-out has logged time with both the Arizona Hotshots of the AAF and the DC Defenders of the XFL.

It’s all about versatility with Holliman. With the ability to line up in the backfield, in the slot, or out wide, he’ll create mismatches all over the field. He’s elusive with the ability to make the first defender miss. Given his experience and multifaceted skill set, the 5’-7” WR should be highly coveted.

Delvon Hardaway had an impressive freshman season for Fresno State back in 2014 where he reeled in 23 balls for 279 yards and a couple of TDs. At that point, his future looked bright but a torn ACL in his second season hindered his progress and limited his effectiveness throughout his college career.

With the injury being a thing of the past, Hardaway is back and still chasing down his dreams. He was a solid wideout for the Aviators in the TFL this past year and will get a shot in the USFL. His main attributes include top-notch route-running, speed, and open-field shiftiness. His experience and elusiveness will separate him from the rest of the wide receiver class in the 2022 USFL draft.

Some guys are late bloomers, and after a very quiet couple of years at Louisville, Dontez Byrd fits that bill. Since his college days, Byrd had a cup of coffee with the Falcons but has mostly floated between the XFL, AAF, CFL, and other leagues. 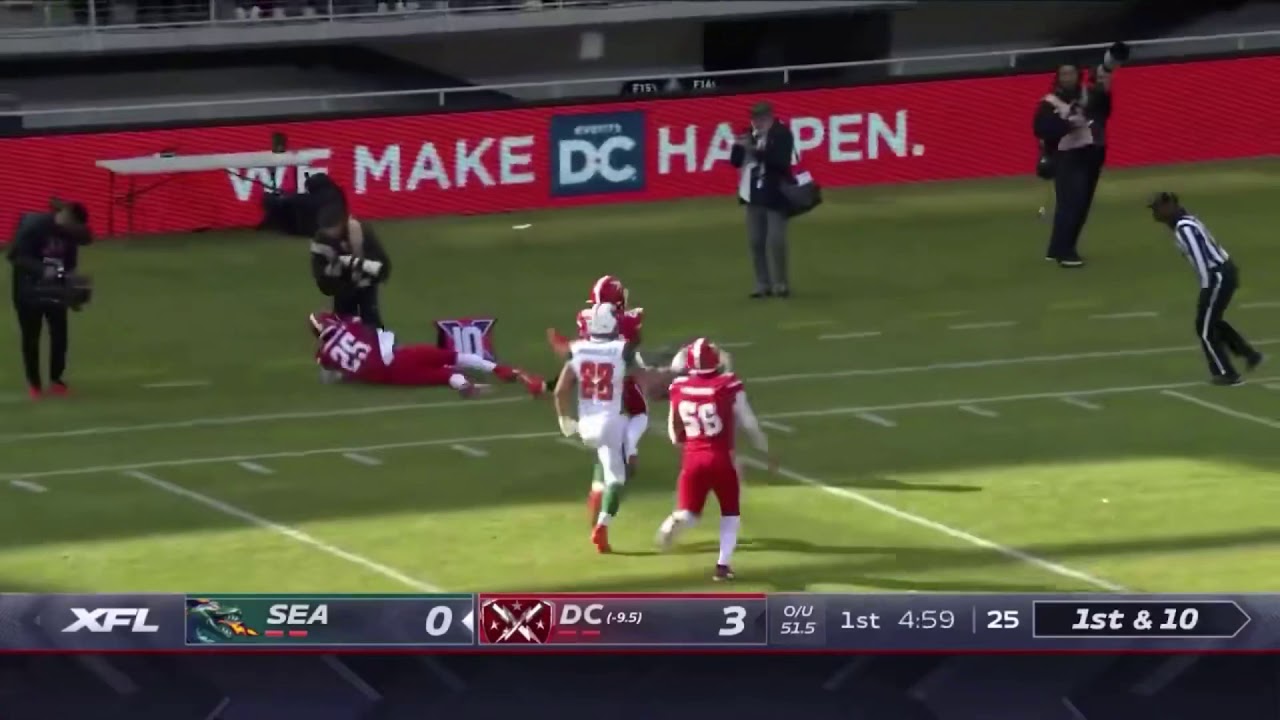 Just recently in the IFL, Byrd was the third leading receiver for the Massachusetts Pirates. The year before that, he was a steady contributor for the Seattle Dragons of the XFL. The takeaway is that Dontez Byrd is just a professional wide receiver with more experience than most of his peers. Additionally, his speed and quickness in and out of cuts will make him a tough cover in the USFL.

Out of all the WRs on this list, Antonio Nunn probably has the best collegiate numbers. At Buffalo, Nunn caught over 100 balls for over 1,700 yards and totaled 10 TDs. He’s a recognizable name for anyone that watched some MACtion over the last few years.

Nunn spent training camp with the Atlanta Falcons before ultimately not making the roster a season ago. The former Bull, known for his excellent hands, lacks professional experience but certainly doesn’t lack talent. While he may not be ready to contribute on Day 1, the long-term potential is there.

Isaac Zico is another receiver who had a very productive collegiate career. As a senior at Purdue, Zico caught 46 balls for 743 yards and 6 TDs. Against Illinois that season, the speedy wideout pulled in 5 balls for 127 yards and 2 TDs.

After leaving West Lafayette, Zico spent training camps with the Cardinals and Titans and had an excellent 2021 in the TSL where he led the league in receiving TDs. With a knack for making tough catches in traffic, expect a strong first season in the USFL for the Purdue grad. Zico has the potential to be a good wide receiver during the 2022 USFL season.

Bang. QB @RyanWillis14 to WR @_Zicoooo for 6. TD #3 on the year for Isaac Zico and TD pass #11 on the season for Ryan Willis. pic.twitter.com/OHJdI2mNyF

Not too many receivers in the USFL are going to have the combination of Josh Crockett’s size and speed. At the D2 level, Crockett had an excellent four years that resulted in 129 career receptions for 2,365 yards and 19 TDs.

After leaving college, Crockett spent a training camp with the Chiefs and played for the Dallas Renegades of the XFL and the Hamilton Tiger-Cats of the CFL. Now with experience at the highest of levels to go along with natural size and talent, Crockett is a very intriguing prospect. We should hear his name early come Tuesday. 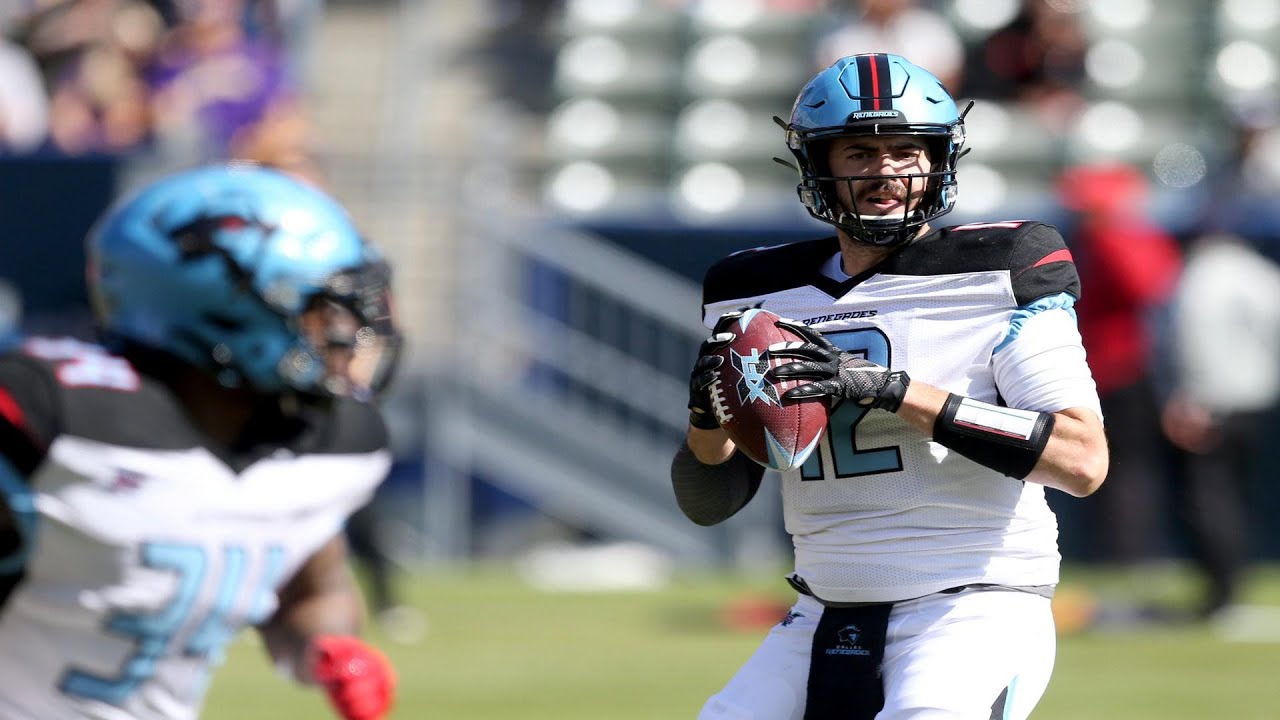 Matt Sewall may be undersized and not exactly an impressive physical specimen, but the shifty wide receiver from Bryant has overcome several obstacles to finally prove he has what it takes to play professionally. In college, Sewall was an ALL-NEC WR who accumulated 100 receptions for over 1,200 yards and 15 TDs over four seasons.

As a professional, Sewall has had workouts with the Cardinals and Jets but couldn’t stay on with either. In 2019, he was set to play for the Orlando Apollos of the AAF before tearing his Achilles in training camp. Last year, he was set to join the Calgary Stampeders of the CFL before coming down with COVID. It’s been an uphill battle for Sewall but his time may be now. I’d project him as an effective slot wide receiver in the USFL in 2022.

Rest of the WR field:

While the 10 players above may be the top WR prospects a lot of us don’t know what to expect come USFL draft day. This isn’t exactly the NFL where you can find about 25 mock drafts from a quick Google search. A few more names to pay attention to are the following 2022 USFL Draft Wide Receiver prospects: